show with a dance presentation and then made their personal introductions. Palacio then introduced the five esteemed judges, which included Ms. Natasha Stuart, Mrs. Yoli Rivero, Dr. Giovanni Solorzano, Mr. Johnny Grief, Ms. Brie Harding and Mrs. Pat Grief as the tabulator. The San Pedro Dance Academy then preformed a Middle-Eastern style dance while the contestants prepared for the Island Wear modeling segment of the program. Sporting playful and flirty beach attire the young ladies were in their element, rocking the stage. A colorful Mestizo dance performed by the ever-energetic San Pedro Dance Academy followed.

The talent portion of the program was a big draw for the audience, as each girl got to perform for the judges. Arlethe Lima put on a theatrical Helen Keller dramatization and a short dance, while both Erica Bodden and CatlineBenguche brought inspired dance performances. Julissa Trejo did a circus themed ring-leader rendition touting the virtues of the Lions.

Out-going Lions Queen Alexis Del Valle gave a repeat performance of “We are the World” that she sang in the March 2013 pageant. After an entertaining monologue and song by Palacio, the contestants took their place onstage in their beautiful evening gowns. The hopeful princesses shimmered and sparkled as they elegantly glided across the stage, each one beautiful enough to be a queen. The question and answer portion followed and the contestants answered with poise and confidence.

While the judges deliberated Del Valle said her farewells, thanked her supporters and took her final walk on the runway. With much anticipation in the air, the first to be announced was Catline Benguche as Miss Photogenic. Miss Amity was awarded to Julissa Trejo and Erica Bodden was named First Runner-Up, making the fourth contestant Arlethe Lima, Miss San Pedro Lions 2013-2014. Lima was crowned and sashed by both Del Valle and Miss San Pedro Solani Graniel. 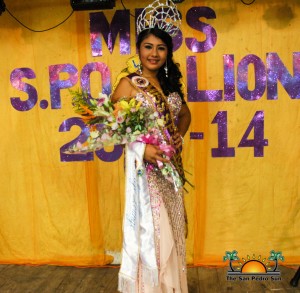 The new San Pedro Lions Queen Arlethe Lima will also become the Miss Lions Zone 59 and will be crowned at the Lions Annual Convention which will be hosted next year in San Pedro Town. Miss San Pedro Lions took home $2,000 cash, amongst other prizes. Her responsibilities include her attending all public Lions functions and other duties requested from time to time. She is the club’s beauty ambassador and as such will be required to travel all over Belize for different functions as well as regionally from time to time. Ms. Lima is also responsible to contribute in the promotion of the general Goals and Objectives of the International Lions Club.

Prince Harry sends message of Thanks for his visit to Belize