On Wednesday April 9th the Belize Tourism Board (BTB) and the Norwegian Cruise Line (NCL) hosted a luxury cruise liner tour and luncheon for Belizean media. The tour of the Norwegian Jewel, which was anchored off the shore of the Belize City Cruise Terminal, gave the media the opportunity to learn about the operations and amenities of the massive, 15-story cruise liner.Colin Murphy, Vice President of Destination and Strategic Development at NCL and Vice President of Public Relations AnneMarie Mathews lead the tour, along with BTB’s Cruise Destination Director Valdemar Andrade and Media and PR Manager, Andrea Polanco.

The tour of the Norwegian Jewel, a vessel that accommodates 2,376 guests and more than 1,000 crew members, included one of their iconic swimming-pooled promenades, the command bridge, the environment station and recycling center (where photos were not allowed), a plush spa and salon area, fitness center, performance theatre that can accommodate 1,000 people, several restaurants, bars, reception floor, art galleries, shopping and more. 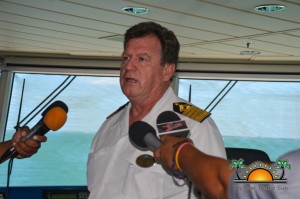 Although star-struck and full of wine and filet mignon, most of the media’s real interest in attending the tour was hearing about the controversial NCL cruise ship port slated for Harvest Caye in southern Belize. During the luncheon that followed the tour, Murphy presented an overview of their plans for Harvest Caye, stating the many benefits of employment and opportunities the cruise industry will offer to the southern community, and that many of the environmental concerns raised by tourism stakeholders in the area have been addressed. “At Norwegian, we have a strong commitment to the environment through our Eco-Smart Cruising philosophy. We will continue that commitment as we develop the Belize project and ensure that we are socially responsible in everything we do,” said Murphy. “From the use of well water and sewage, to the floating dock designed to harbor a boat of such magnitude, NCL has addressed these issues and upholds our commitment to responsible development with minimal environmental impact.” According to Murphy, the long term benefits of tourism development and employment opportunities for people of the southern areafar outweighs the negative environmental implications, which Murphy maintains is negligible. 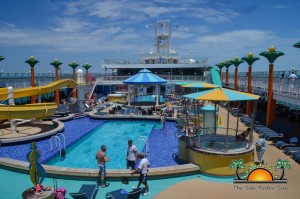 The Government of Belize seems to believe the project is ideal for the area, and the project has received support from the Belize Tourism Board, the Placencia Village Council and a dozen Maya leaders who NCL claims have publically announced their endorsement. The Placencia Tour Operators Association first publically opposed it, but later changed their position in favor of it in February. It has been passionately opposed by many others, including the Peninsula Citizens for Sustainable Development, with the Placencia Chapter Belize Tourism Industry Association (BTIA) leading the fight. Many concerns lay within the Environmental Impact Assessment (EIA) approved by the Belize Department of the Environment and the National Environmental Advisory Committee (NEAC).On March 29th a letter was sent to Martin Alegria, Chef Officer of the Department of Environment from attorney Godfrey Smith on behalf of the Placencia Chapter of the Belize Tourism Industry Association. The letter cited several inconsistencies within the EIA process, including the lack of a public hearing. The correspondence stated, “We are of the view that the NEAC’s decision and that of the DOE’s is tainted with procedural impropriety for failing to follow statutory procedure in approving the EIA.” The letter went on to forewarn legal action should the concerns not be addressed and requested a response within two weeks. 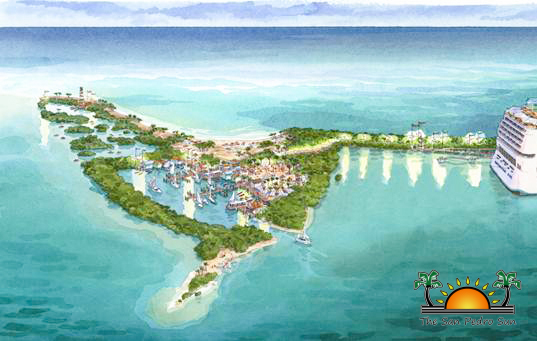 According to Stewart Krohn, Chairman of the Placencia Chapter of the BTIA, a response from the DOE was received on Monday, April 14th, stating that in fact DOE and NEAC had complied with the law and the denial of a public hearing was well within their discretion. “We obviously do not agree and will proceed with our lawsuit,” Krohn told The San Pedro Sun.

Norwegian Cruise Line was the first cruise company to come to Belize in the late 1980’s. Other cruise companies that stop in Belize include Princess, Carnival, Royal Caribbean and Celebrity Cruise Lines.

Fishing allowed but only with a valid license, says Belize Coast Guard in San Pedro