The San Pedro Police station is currently undergoing a series of transformations that seeks to enhance its functionality and appearance. On Friday, July 22nd, in the presence of Mayor Daniel Guerrero and Councilor Gabriel Nunez, Estevan Perera, along with Cindy Staines, donated two new air conditioner (AC) units to the police department. On hand to receive the donation was Officer in Charge of the San Pedro Police Sub-Formation, Superintendent Sandra Bowden. 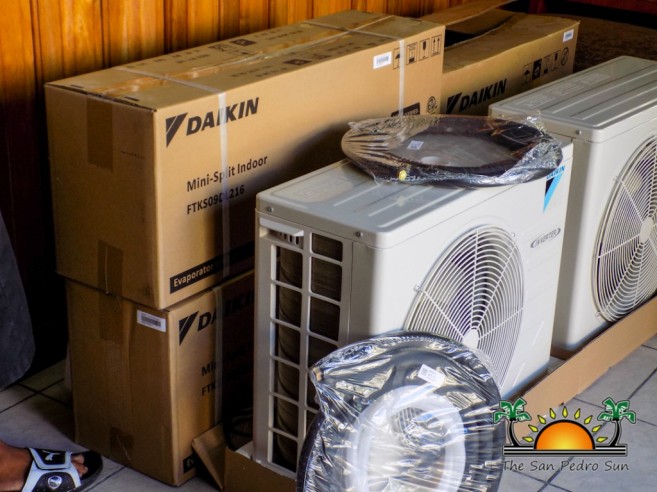 According to Staines, who partners with Caye Supplies, Super Buy, and Bachi Engineering Corporation, the donation was part of her company’s social responsibility to contribute to the community. “Since we have a new brand named “Daikin”, we decided to donate these units to help the police department improve their conditions. These AC units are Japanese state of the art innovative technology designed to withstand the climate of this island,” said Staines. The two unit models are a Daikin 900BTU and a Daikin 12000BTU, both equipped with inverter systems. Another benefit to having inverter systems is that these units are energy efficient, saving up to 30% in energy consumption.

In addition, Bowden discussed with Perera the location plans of installing the new units. After taking a tour of the police station, Bowden confirmed that one unit will be placed at the main desk area, while the other will be located by the holding cell. The plans are set to install the two new units by this upcoming week.

It was Perera’s idea to place a unit to the holding cell to alleviate prisoners from enduring hot temperatures. “The problem I see with the holding cell is that sometimes it gets really hot, and the prisoners faint or even have heat strokes. So as I discussed it with Ms. Bowden, she found it as a necessity,” said Perera. 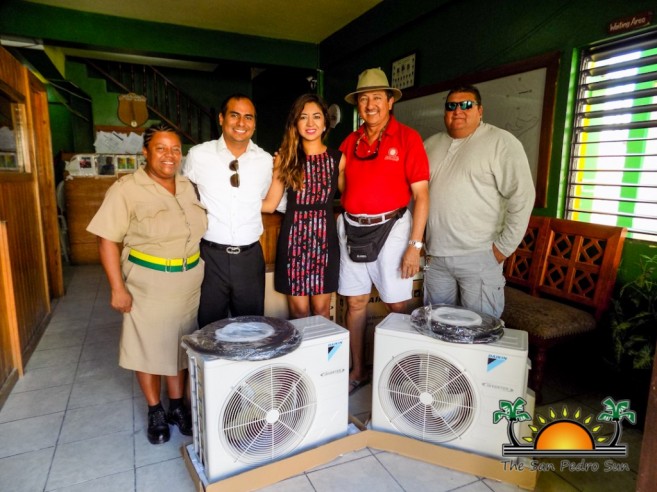 Next on the agenda is to source a generator for the police department to avoid issues during blackouts.

Discussing future plans to transform the station
Bowden also held a brief meeting with Mayor Guerrero, Nunez, Perera, and Staines, to discuss ideas on how to improve the overall look, and hospitality aspect of the police department. Plans discussed included repainting the building, having a designated person to formally greet individuals, and installing more security cameras around the island’s vulnerable areas.
Mayor Guerrero, he feels that the police department needs a facelift, indicating that some people may be intimidated when at the station, so he wants to improve the interior design to welcome visitors, as well as accommodate tourists. “The police department has come a long way with the San Pedro Town Council, and we need to change the face of the police and fire department. We need to make the station look attractive and project friendliness. We want locals and expats to come in and feel welcome, and at home,” said Mayor Guerrero.
The installation of security cameras throughout the island was deliberated to deter criminals. Bowden mentioned that having security cameras in critical junctions will help solve crime, and will serve as good evidence. Some of the areas suggested were, at both ends of the bridge, in San Pedrito, the Central Park, and between Coconut Drive and Seagrape Drive.

Mayor Guerrero indicated that he will always support the improvement of the SPPD station, providing assistance when needed. The plans discussed will be put into effect after the handing over of the Barracks.
Perera stated that a portion of the funds collected at the upcoming Aquafino Island Resort & Spa’s Event will be used to purchase the much-needed generator for the police station. Aquafino will be hosting this year’s Costa Maya Beauty Contestants for a swimsuit shoot and fashion show on Saturday, July 30th.