As is customary, San Pedro High School (SPHS) celebrated its Founder’s Day with an assembly on Wednesday, December 5th. The occasion commemorated the key individuals who helped establish the high school in 1971, while also celebrating Former Principal of SPHS, Rafael Angel Nuñez’ birthday. The fun assembly took place at Angel Nuñez Auditorium, with students from First to Fourth Form, teachers, and invited guests in attendance. 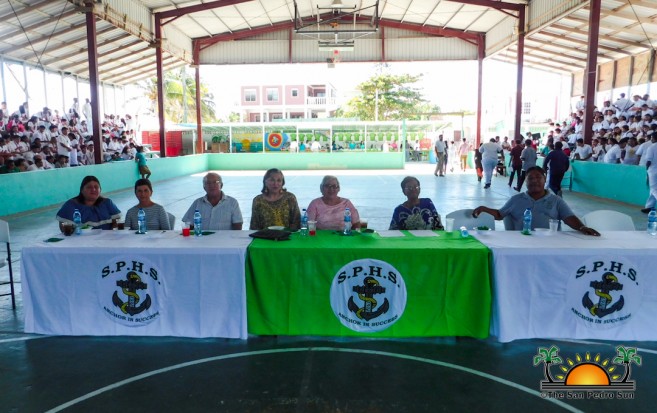 The Founder’s Day Assembly began promptly at 9AM with the singing of the National Anthem followed by the school song. SPHS student Nayobie Rivero then delivered the welcome address. Master of Ceremonies Alex Nuñez gave a brief history of SPHS, and introduced the invited guests that played a significant role in founding SPHS. They included Celi McCorkle, Martha Guerrero, Martha Leslie, Gustavo Ellis, Ilsa Salazar, and former President of SPHS, Rafael Angel Nuñez and his wife Ligia.
Thereafter, students entertained all the attendees with musical performances, dances, poems, drama and more.

To cap off the celebrations, the students of SPHS sang “Happy Birthday” to Mr. Nunez, followed by a few more presentations after which students were treated to snacks and an early dismissal. The San Pedro Sun congratulates SPHS for another year of success, and we wish Mr. Nuñez a very happy birthday!