In February of this year, Belize Water Services Limited (BWSL) announced the acquisition of Cayman-based water company, Consolidated Water Belize Limited (CWBL) on Ambergris Caye to improve and expand their water system on the island. As the Easter Holidays are fast approaching, yet again, island residents are reporting an increase in low water pressure and shortages, particularly during the night hours. The ongoing issue is affecting the tourism sector on the island, as many large hotels have reported full occupancy and are struggling with the situation. The San Pedro Sun reached out to BWSL and was informed that the company is currently working on their infrastructure to boost their production and remedy the situation, but that improvement in their water production is not expected to be finalized until October of this year. At such, islanders should expect water shortages and supply restrictions for the remainder of the current peak season. 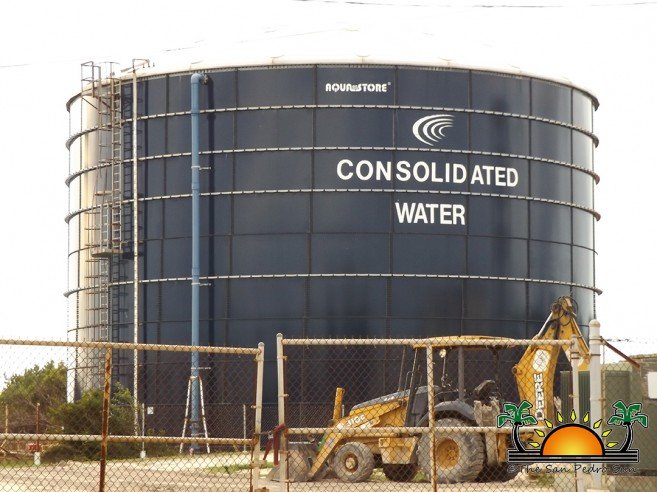 BWSL is asking the general public to bear with them during the Easter Holidays as they are working on finishing their upgrades in their water system. The company referred to a press release issued on February 13, 2019, in which it explained that it had already initiated works to improve the supply for Ambergris Caye by expanding storage capacity. This includes the present construction of an additional one-million-gallon ferro-concrete storage tank south of San Pedro Town. The tank is being constructed in two sections to facilitate maintenance while ensuring storage in the other half. Personnel on the island stated that the tank construction is on schedule and the project should be ready by October 2019. In addition to the tanks, BWSL will also be installing two water plants to produce the necessary amount of water for the island to ensure a 2020 high tourism season without any water issues.
The purchase of CWBL was funded via a US$8.5 million loan from the Caribbean Development Bank, which also includes the upgrade in the current infrastructure. The process of the purchase was initiated shortly after CWBL announced its intentions to leave Belize in October 2018. CWBL claimed that it was having difficulties in repatriating profits out of the country. After that, they entered a non-binding memorandum of understanding with BWSL for the purchase of its shares. They reached an initial agreement under the condition that BWSL helped them facilitate the conversion of their profits in Belize to U.S dollars whenever they were transferred to their home country. BWSL complied with this condition and assisted them in repatriating the accumulated profits of US$5.35 million dollars.
With the total ownership of the water company now in the hands of BWSL, they are now looking forward to producing a steady supply of water to Ambergris Caye, eliminating the problems of shortages and low pressure for both residents and visitors alike starting in October 2019.