British Paratroopers on a six-week exercise in Belize


British paratroopers from the United Kingdom are on a six-week training in the jungle of Belize. The exercise will test the Paratroopers’ survival skills in the jungles of the country and is part of ‘Exercise Mayan Warrior.’ A paratrooper is a military parachutist; someone trained to parachute into operation and usually functioning as part of an airborne force. 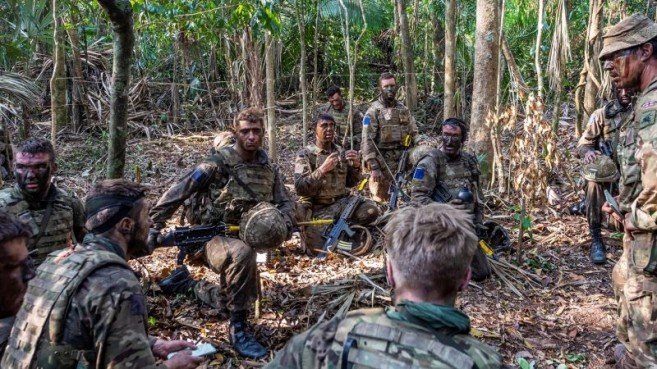 The 2nd Battalion the Parachute Regiment (2 PARA) are developing their ability to survive and look after their kit in arduous conditions. The Parachute Regiment is the airborne infantry regiment of the British Army. The 1st Battalion is permanently under the command of the Director Special Forces in the Special Forces Support Group (SFSG). The other battalions are the parachute infantry component of the British Army’s rapid response formation, 16 Air Assault Brigade. Paratroopers are trained to conduct a range of missions, from prevention and pre-emption tasks to complex, high-intensity warfighting. Watchwords are professionalism, resilience, discipline, versatility, courage, and self-reliance.
The Parachute Regiment was formed in World War II and, save 1968, have been in constant action since. Determined and courageous, they earned the nickname “Red Devils” from German Paras in North Africa. Heroic actions in Normandy, Arnhem, the Falklands, and Afghanistan are cemented in Regimental folklore.

Jungle warfare instructor Sergeant Ollie Ward states, “The training in the jungle takes you back to basics and makes you a better soldier in any environment. Using navigation as an example, we can’t use GPS because of the tree cover, so we’re navigating with maps, bearings and pacing distances – you really must have the basic skills sharp.” Sergeant Ward added, “The jungle demands soldiering at the highest level, which is what being a paratrooper is all about.”
According to Officer Commanding Major Mike Thwaite, the exercise will enhance the Regiments ability to work in a range of climates and locations around the world. “It’s a real test of our soldiers’ ability to live and operate with minimal logistic or medical support. The jungle is an incredibly demanding environment, and it’s important that we’re familiar with it. By the nature of our role with 16 Air Assault Brigade, we could find ourselves deployed on operations in the jungle at a moment’s notice.”

The exercise will further enhance their ability to work in a range of climates and locations around the world, as well as ensure that the regiment is ready to deploy at a moment’s notice. The UK’s military presence in Belize through the British Army Training Support Unit Belize (BATSUB) has been carrying out country and tropical environment training of its troops from the UK as well as other international partners.