Foreigners on an extended stay on Ambergris Caye have been questioning some alleged changes at the Immigration Department. Allegations are that after being in the country for six months, a foreign citizen is required to obtain a work permit to extend their stay Belize. 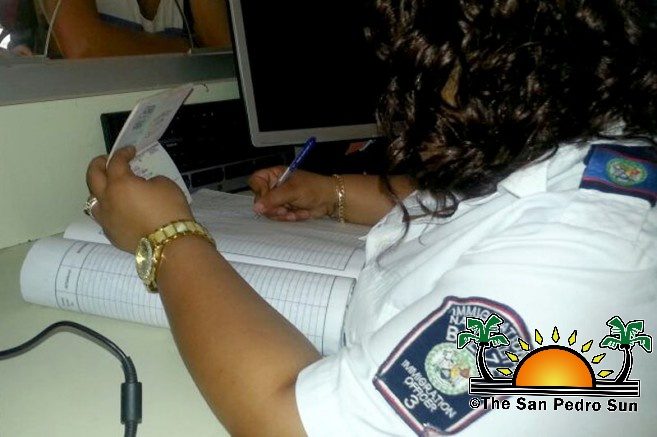 ,,The San Pedro Sun reached out to the Immigration office on the island, where such reports were clarified. According to them, the rules for extending a stay in the country over six months vary by nationality, and the main request is for applicants to prove they have resources or viable means to sustain themselves while in Belize. In the case of North Americans, they indicated that after six months, they could extend their stay subjected to paying a higher monthly fee. A work permit can be beneficial for the applicant, but it was not considered imperative.
Normally immigration laws in Belize allow non-Belizean citizens to extend their stay for a maximum of six months. Every month, many persons living on Ambergris Caye visit the Immigration Office to extend their stay in the country. The monthly fee is $BZ50 a month during the first six months, with the monthly fee going up to $100 after that. According to concerned foreign citizens, the rule appears to be demanding a work permit to continue the extension. But according to immigration officers in San Pedro Town, that is not the case. For retired citizens from North America, like the United States or Canada, they can continue getting their monthly extension for $BZ100 beginning from the seventh month. For non-retired individuals, an interview process is required to determine how the person will continue funding his/her stay in the country. The applicant needs to provide the Immigration Department with information that demonstrates their financial stability while here, such as a bank account statement. Depending on the outcome of such interview, they will grant an extension. If the person has a work permit, it could be considered an advantage to further proof that the person can potentially work to finance his/her stay in Belize. Residency can be applied for after an individual resides in Belize for one year, with no more than 14 days spent out of the country.
In the case of other nationalities, the Immigration Office stated that after interviewing the foreign citizen, they determine their visitation status. Although no further information was shared, The San Pedro Sun spoke with island residents from other parts of Central America regarding the matter. They preferred to stay anonymous and shared that after six months, they are asked to leave the country for a short time. They then return to Belize and stay another six months before heading back to their country of origin for a couple of days.
The Immigration Department highly recommends that retirees consider the Qualified Retired Persons Incentive Program (QRP) offered through the Belize Tourism Board (BTB). This program gives qualified retirees better benefits without having to leave the country. BTB initiated the QRP program in the ’90s, and it opens the doors for anyone forty-five years or older with a pension or annuity to retire in Belize. The program also covers spouses and children. The main requirement for retirees is proof of a minimum $2000US monthly payment from pension or business investments outside of Belize, and the amount must deposit the funds into a Belizean bank. Other requisites include having a clean criminal record, and retirees must pass the background security clearance check by the Ministry of National Security.Once that process is approved, a QRP Resident Card is issued by the BTB, entitling the qualified person multiple entries into the country. The card also allows the individual to remain in Belize with their dependents for as long as they continue to be a part of the QRP Program. This also means that the person will not have to renew their tourist visa every 30 days at the Immigration Office.
For more information on immigration, call their office on the island at 206-2086, and for further information on the QRP program, contact the BTB at 227-2420.