Home » Community and Society » Despite immigration offenses, American national is released without charges

Despite immigration offenses, American national is released without charges 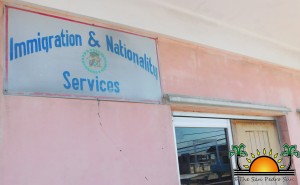 During the Christmas holidays, an American national residing on the island was reportedly arrested for immigration offenses. The male individual is well- known on the island but apparently had been in the country illegally for some time. Thus, island residents and even local authorities were stunned when the Director of Immigration released him without charges.
According to reports, when police arrested him, he claimed he had lost his passport. However, he was later able to produce his passport, telling Immigration Officials that he had lied because he feared of what would of happen to him. He also stated that he was unfamiliar with the immigration procedures and had been trying to apply for Belizean residency through an agent. The Department clarified that for someone to be eligible to apply for Belizean residency, he or she must be living in Belize for 50 consecutive weeks by renewing their stay in the country every 30 days.
Immigration officials on the island stated that they were instructed by the Director of Immigration to further interview the detainee. They indicated that he had failed to extend his stay in the country for the past several months due to improper guidance towards a residency application and that he was unaware of how to deal with the situation.
After being interviewed and based on his activities on the island and in good standing with the local authorities, his case was found justifiable. According to the Immigration Department, its Director then ordered any charges to be removed after payment was made for his arrears, which were confirmed to be mere months and not the rumored years. “He had been illegal for a couple of months, and not years,” the immigration officer said. “He had a justifiable reason, he had a passport and paid his past dues,” the immigration officer stated.
It was also indicated that even though the person is now legally in the country, he cannot engage in any working activity until he gets a work permit. It is expected that he will within the coming weeks and was advised that in the near future, once he maintains his legal status intact, he may then apply for his Belizean residence through the proper channels in the Immigration Department.
In addition, the Immigration Department explained that such treatment is not offered to everyone. According to the immigration officer, it is case by case and totally based on the particular situation the individual has been through. The officer also denied any involvement of a specific third party in the person’s release. They simply noted that his case was legitimate and that he was able to comply with the conditions concerning his case.
The Immigration Department advises residents on the island that to avoid any similar troubles with the law, to kindly visit their respective immigration branch to extend their stay every month. Failure to do so can lead to a penalty of a $1,000 fine or six months in prison before deportation.