On Wednesday, December 6th, the Senate Special Select Committee held their last public hearing after 12 months of investigating the Auditor General’s Immigration Department Report. Throughout the past months, several persons, including government ministers were interrogated based on the allegations revealed in the Auditor General’s report released in August of 2016. The report pointed out multiple cases of fraud in the issuance of Belizean visas, nationality, and passports causing a controversy within the country’s political arena. The last person to appear at the hearings was Auditor General Dorothy Bradley who compiled the report. She spoke about the process and indicated that her team is still engaged in a final probe before a full report will be released in January of 2018. 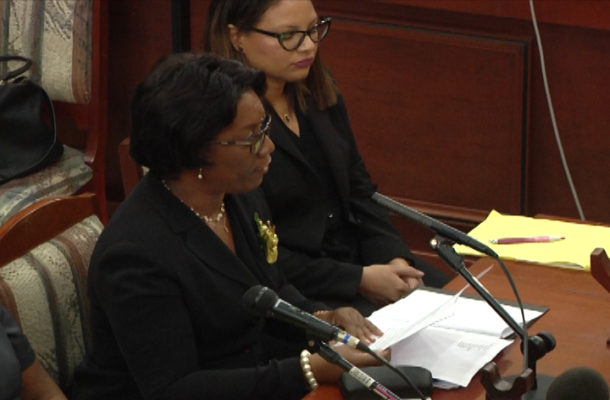 Bradley expressed to the media that although her work went through harsh scrutiny she is very satisfied with the results so far. “We did an audit,” said Bradley. “We made a presentation and once it reached this committee I felt that we were making progress.” She encouraged the Belizean people to be vigilant and stay informed about the activities of the Government.
The Auditor General also indicated that should more information be needed a deeper audit into the Immigration Department could be done. However, she feels that they have provided the Committee with sufficient information about the wrongdoings in the Immigration Department. “There has been a lot of information presented,” said Bradley. “If nothing happens, then it is not that the information was not there. But really from the audit standpoint, we provided reasonable assurance that things went really wrong at Immigration.”
According to Pro-tem Chairman of the Senate Special Select Committee, Senator for the Business Sector Mark Lizarraga, the next step now is to compile the final report sometime after mid- January. “We are meeting again on January 13, 2018, to decide and chart our way forward,” said Lizarraga. “The Committee will be meeting with its attorney and draft a plan and write the report,” Lizarraga stated that during those meetings they will be looking at all the evidence presented so far to the Committee. He added that there will always be an opportunity for a minority report in case other members of the Committee feel differently from the majority of senators regarding the final report.
Lizarraga noted that given some of the evidence presented in the past hearings, they are somewhat disappointed with the slow action from the police to commence the respective investigations. He pointed out that the Commissioner of Police, Allen Whylie has restrained from discussing certain topics when it comes to the demands of an investigation into the illegalities at Immigration. “It is of great concern and I think this behavior from the Commissioner will be featured in the final report from my standpoint, as to why we have not seen more action from the police,” Lizarraga ended.
The long process of the hearings, which took place every Wednesday, came at high cost to the Belizean people. In August of this year, the Ministry of Finance head by Prime Minister Dean Barrow forecasted that the Committee would have spent over $300,000 by the end of November. Now that the 41 hearing sessions are over, Belizeans will be looking forward to the results of the full report next month.