The session began with Castellanos disclosing a written statement before the Senators. When given the opportunity to share her perspective, she described the department as the “belly of the beast”—noting it as a place of hustling and corruption. “The department headed by the Acting Director, Maria Marin, and her small team – including myself [as] the Administrative Officer – made many attempts to stop the rampant malpractices that plagued the department. The job to fix the problem was too difficult to accomplish; the reason being was there was not the support from our ministry. We considered – and I will read verbatim because I have to say what I have to say today – we considered ourselves orphans of the Ministry of Labour, Local Government and it ended with the Immigration Department. The department became important when a document needed approval; we became infamous with scandals, but even so the support was just not there. Yes, the culture was there… is there…. it still is – but there are persons who are trying to pretend they don’t know what culture exists at the department…I was in the belly of the beast; I was in the Immigration Department for three years and am among those named in the Auditor General’s Report. This gives me the right to say the following: the Immigration Department has an entrenched culture of corruption and hustling; milking the cow we say, from the very top to the very bottom of the ladder. No politician can force any public officer to do illegal acts when performing our job. And if we do, then we have to face the same consequences as the politicians, for the Belizean people are demanding justice. There are a few good, honest, and dedicated officers, but there was not enough trusted staff to oversee the daily operations of the sections and at the district offices and border stations. The call for help was not answered and this inquiry is the result,” said Castellanos.
Castellanos continued her shocking, open statement. “I would like to state that the resistance by some officers was beyond my comprehension. Resistance in adhering to regulation, to doing the right thing. At one point, some of us were fearful for the life of the acting Director, Maria Marin. Why? Because she was doing her job, because she was strict, because she was putting things in place for the hustling to stop. This is just a part of the story regarding the Immigration Department. The corruption behind closed doors, the intricacies, the lies and the attempts to cover up the wrongdoings, a department – as far as I can call it – of ill repute. It is all sad. I will be hated for this, but I am under oath today, and the truth must be told. This was written by me,” ended Castellanos. 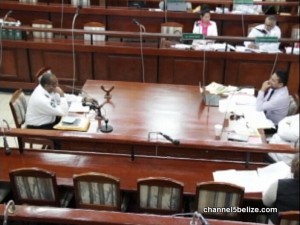 Afterwards, the Senate called forth Senior Immigration Officer George Reynolds to be questioned in the afternoon session. During the audit period, he was in charge of the Immigration Services Section of the Department in Belmopan, which oversaw visas and all other temporary immigration permits.
Chairman Senate Select Committee Honorable Aldo Salazar began interrogating him about the eight infamous stolen visas that went missing in December 2012. “According to Vernon Leslie, immigration officer Wade removed eight visa foils from officer Tench and gave it to Middleton for sale. Middleton took the visas to Belize City to deputy mayor Eric Chang and the Belize City Council financial controller Patrick Tillet, who purchased the visas. He says that both Mr. Chang and Mr. Tillet wrote statements confirming the transaction, both men doubted the validity of the visas so they brought them to you and you confirmed the visa foils were legitimate but were illegally issued. Is this statement accurate as far it relates to your knowledge?”
Reynolds responded that the statement was not entirely accurate. “The part that I said that they were illegally issued – I did not use those words or I would have acted differently if I had used those words. I can recall they were not issued completed because they were missing something. So I did not say illegally because they were missing the stamp and that was something that happened often just with the new use of visa foils because people come back to you in Belmopan that the officer forgot to put the actual stamp on the visa,” said Reynolds.
Senator Salazar asked Reynolds why Patrick Tillet would approach him. “He asked me if I could fix this for him because he think the officer did not do it properly. He assumed it was issued at my office which in return I told him yes these are legitimate files because I saw the security feature on it and I told him these were not issued here so you need to take it back to the office where you got it issued. Being that I wouldn’t expect him to steal anything—we did that for more than one person who came with different issues and we asked them to go back to the office where it was issued to get it completed and that was it. It was just two minutes the most, because I was coming out of my office when he met me and we went in there. We just spoke briefly and he left,” said Reynolds.
The Senate hearings resume next week on Wednesday, February 22nd. The Senate Select Committee is also planning to place a summons on all the individuals who previously declined to attend, and have them attend the hearings on Wednesday, March 1st.

The Opposition calls on the government to not raise taxes