Corruption is criminal, immoral and the ultimate betrayal of public trust. To this end, the newly constituted Ministry of the Public Service, Constitutional and Political Reform (MPSCPR) recognizes the International Anti-Corruption Day 2020, observed under the theme, “Recover with Integrity to Build Forward Better”. 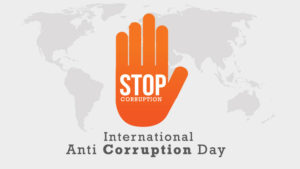 The Prime Minister Hon. John Briceño and the new administration has committed to fast track the implementation of the United Nations Convention against Corruption (UNCAC) to which Belize acceded on December 12, 2016. Reducing the risks of corruption and mismanagement will require the involvement of strong anti-corruption bodies, better oversight bodies, a more open and transparent public procurement and enhanced anti-corruption compliance. The theme, which calls governments to “recover with integrity” highlights that only by implementing effective corruption mitigation measures, will a better recovery be possible.
The Ministry of the Public Service, Constitutional and Political Reform and Hon. Henry Charles Usher stand in solidarity with other nations to fight corruption and recognize the International Anti-Corruption Day 2020.
Statement on Pro-Good Governance and Anti-Corruption
Hon. John Briceño
Prime Minister
Today, as across the world countries and governments celebrate Anti-Corruption Day, I take this opportunity to reiterate my unwavering commitment, and that of my government, to fight corruption wherever it is found, in government or out.
My People’s United Party was elected on November 11th with the most overwhelming mandate in Belize’s political history. It was a victory for the people of Belize, and a message to the outgoing administration that corruption would no longer be tolerated. Indeed, brazen, sickening corruption had become the order of the day, and over the past decade had infiltrated every government Ministry and Department.
We have made a covenant with the people that no longer will corruption be tolerated as an inherent part of politics. Already we have put structures in place where before there was none. We have commenced investigations in Ministries where public monies and public trust were raped and ravaged. The preliminary findings are shocking, worse than even we could have anticipated, and those will be made available to Belizeans very soon.
We have directed forensic audits of all statutory boards and utilities, with a view to identifying corruption, restoring oversight and checks and balances, recovering the people’s assets which were stolen and misappropriated and in bringing those guilty to justice. We will ensure that all relevant agencies are empowered to provide necessary oversight and prosecution powers.
As a responsible, serious government, we will restore good governance, integrity, transparency and accountability to office. We will lead through service to our people and to our nation.

Prince Harry sends message of Thanks for his visit to Belize