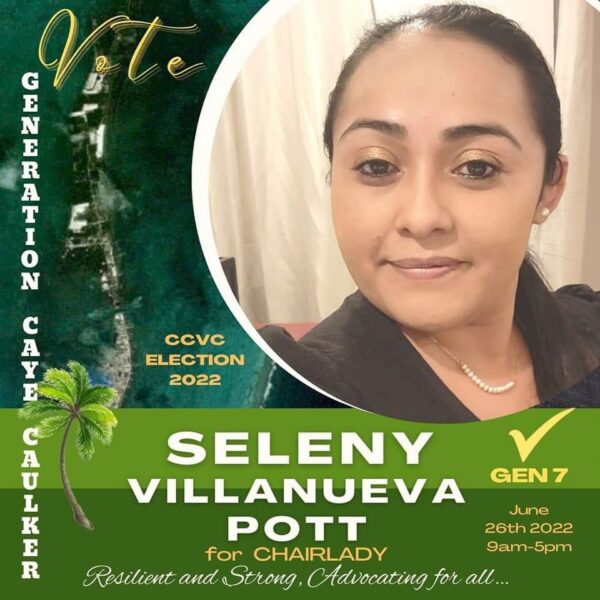 For a second time, Hicaqueña Seleny Villanueva-Pott was elected as Chairlady following the Village Council elections on Sunday, June 26th in Caye Caulker. She is the first female to be re-elected to such a post in her village. Pott has been in the Caye Caulker Village Council (CCVC) since 2016, when she first served as the Vice-Chair.

The polling station opened from 9AM and saw a steady flow of voters until 5PM when it closed. According to reports, over 800 electorates of the 1,300 + came out and exercised their constitutional right to vote.

As the counting proceeded, unofficial reports surfaced that Pott and her slate were in the lead. Later in the evening, the presiding officer emerged from the counting and announced the official results. Pott received a total of 450 votes, followed by Jimenez with 276 votes and Magaña Jr with 132. Other candidates for the chairmanship include Rubio Charles, with six votes, and Marina Alamina received ten.

Area Representative under the PUP, the Honourable Andre Perez, was there supporting Jimenez. Perez congratulated Pott, and although Caye Caulker is predominantly considered a PUP ground, he said it seems to be greatly divided. Perez said that he would work to unite the island, and although there may be differences, he looks forward to working with Chairlady Pott for the betterment of Caye Caulker.

Chairlady Villanueva Pott expressed her gratitude to everyone who voted for her and assured all island residents that, along with her councilors, she would continue working hard to make Caye Caulker a better place.

Jasmine Hartin returns to the island demanding to see her children

MOHW says clinically the Omicron COVID-19 variant is in Belize