During the Second World War, some 900 men from Belize (then British Honduras) sailed over 5,000 miles across the North Atlantic to fell timber in the forests of Scotland as part of the United Kingdom’s war efforts. On July 25, 2022, the legacy of these Belizean foresters, as well around 6,000 other men from across the Commonwealth, was commemorated with the opening of the Commonwealth Foresters’ Memorial at Pollok Park in Glasgow, Scotland. 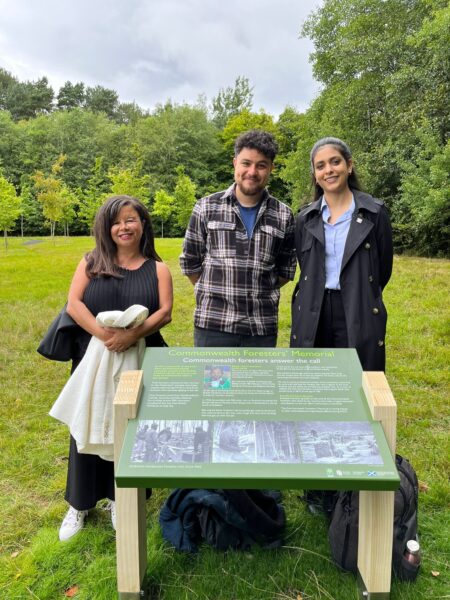 The perilous 14-day journey of the Belizean foresters to Scotland involved dodging Nazi U-boats and enduring cold temperatures. Once in Scotland, the men of the British Honduran Forestry Unit were assigned to several camps across the country. While carrying out their laborious work, the Belizean foresters experienced harsh weather and very basic living conditions. Additionally, the Belizeans grappled with the racial prejudices and suspicions of the local population.
One of the Belizean foresters was Sam Martinez of Punta Gorda, who arrived to work in the forests of Scotland in 1942. Following the end of the war, he chose to settle in the city of Edinburgh to raise a family and became an active and beloved member of his community. Sam Martinez lived until the age of 106 and passed away in 2016.
Attending the official opening of the Commonwealth Foresters’ Memorial was Carol Martinez, the daughter of Sam Martinez, and Yutsil Hoyo Diaz Martinez, his grandson. They were joined by Màiri McAllan, Minister for Environment of Scotland, and Jordan Craig, First Secretary at the Belize High Commission in London. The memorial features a plaque commemorating the legacy of Sam Martinez and the Belizean foresters as well as a mix of 100 trees to honour the Commonwealth. The species liquidambar was planted in recognition of Belize, where it can be found.
The Commonwealth Foresters’ Memorial is a living tribute to the remarkable commitment and selfless service of the Belizean foresters and others from across the Commonwealth during the Second World War. The memorial further highlights the deep historical connections between Belize and Scotland. Belize commends the efforts of the Scottish Government and the city of Glasgow for its effort to commemorate those previously marginalized by history.

New Board of Commissioners for the National Women’s Commission