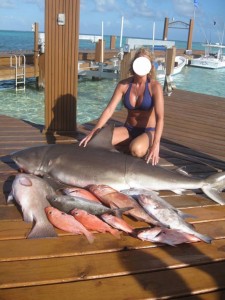 Sharks are classified as apex predators that provide important functions to the stability of the marine ecosystem, especially the coral reef. In Belize, the Wildlife Conservation Society (WCS) has been at the forefront of an awareness campaign, creating a baseline for research and conservation efforts and even educating locals on a more sustainable use of Belize’s fisheries. So when a tour company caught and killed a seven-foot bull shark, many islanders were outraged, alerting authorities about the incident.
On Wednesday January 29th, pictures of a dead bull shark were seen on a vessel belonging to Strike Force Belize, owned by Rudy Lewis. Several pictures posted on the company’s Facebook page showed the catch of the day, including the shark, and next to the catch were Lewis and other local islanders.
While shark populations have seen a drastic decline due to unregulated overfishing and lack of proper management, bull sharks are not considered an endangered species (as is the case of nurse sharks and the globally threatened hammer head sharks). Nonetheless, only holders of special shark fishing licenses are legally able to fish for shark in Belize. Up to date, only 42 people are allowed to fish for sharks during open shark season, which runs from November 1st to July 31st. According to The Belize Fisheries Department, who approves and grants shark fishing licenses, Strike Force Belize/ Rudy Lewis does not hold such a license.

“We received a report and we carried out an investigation with the assistance of our agencies. What we are able to ascertain is that a group of folks were out fishing and caught the shark. They tried to release the shark, however in the process of unhooking the shark, the animal received a serious wound that compromised its life. Instead of leaving the injured shark to die out at sea, they decided to bring in the shark, clean the meat and donate the carcass to a feeding program at one of the schools on the island,” said Hampton Gamboa from the Conservation Compliance Unit at the Fisheries Department.
According to Lewis, Strike Force Belize does not engage in shark fishing and on the day in question, they were out “deep drop fishing” for grouper and snapper. Lewis said that while out fishing two sharks hit their bait and while they managed to unhook one safely and was released, they were not as fortunate with the other one. Lewis claim that by the time the shark was pulled onboard, it was dead from the injuries received as the hook went deep inside the shark. “We wanted to make the best from an unfortunate incident and instead of leaving the shark to sink to the bottom of the sea we decided to bring it in for the feeding program. We knew that hundreds of children could do well with the shark. We deeply regret how it turned out and the repercussions,” said Lewis.
Principal of Holy Cross Anglican School Grace Williams confirmed that indeed the school received over 150 pounds of shark flesh for the feeding program. “He did a genuine gesture and donated the fish to us. When he visited the school earlier this year, we took him to see the feeding program and he noticed the challenges and offered to donate fish from time to time, which to us, is very helpful,” said Williams.

Shark sightings is an added attraction that tour guides highlight to visitors when touring popular dive sites off Caye Caulker, Ambergris Caye, Blue Hole and Turneffe Atolls, just to name a few. Belize’s sharks and rays conservatively generate a minimum of BZ$10 million annually in renewable tourism revenue, but the sad reality is that the shark population is quickly dwindling according to studies conducted by several conservation groups. For that reason, even as the shark carcass went to a feeding program, the act did not sit well with many tour guides who depend on the reef and its rich eco-system for their livelihood. For years tour guides have maintained the argument that “sharks are worth more alive than dead,” thus criticizing the act.
The Belize Tourism Board, Director of Quality Assurance, Armeid Thompson indicated that they are also looking into the incident and will be addressed by the Tour Operators Licensing Committee. “The Fisheries Department has been notified and they are looking into the matter. We know that this operator is a legal tour operator and we will bring this matter before the Tour Operator Licensing Committee, which is scheduled to meet next week, for them to make a decision on this matter. This abhorrent and destructive action is in contravention of current Fisheries’ regulations, and BTB legislation as responsible tour operations. It flies in the face of hard work which conservation organizations do to address shark matters in the country, and it is my strong conviction that the committee will take the corrective measures to ensure that this type of behavior is not the norm from any of our guides or operators,” said a statement from Thompson.
“The owner of the vessel was reminded of the fisheries regulation as it relates to shark fishing. Because of what we found out, and due to the fact that the shark carcass was donated to a good cause, we decided to serve them with a warning in this instance,” clarified Gamboa when asked about the measures taken against the owner of the vessel.
Under the Fisheries Regulation, Statutory Instrument #78 of 2011, shark fishing and export of any shark product is prohibited without a special shark fishing license. Anyone caught breaking the law is deemed punishable after summary conviction of “not less than $100 or more than $500 or six months imprisonment or both.”
Since 2006 WCS, through the Belize Shark Project, has been advocating for the better management and promotion of shark and rays conservation through research, capacity building, outreach and even policy support, asking for stricter laws as it relates to shark fishing in Belize.