Belize reaps an estimated $540 Million annual economic benefit from the Turneffe Atoll, which has now been put at risk by a huge 95-room hotel development without so much as an Environmental Impact Assessment (EIA), the Turneffe Atoll Trust warned in a report presented to the media at the Radisson Fort George Hotel in Belize City on Tuesday morning, December 18.
The report tallies the $540 Million in benefits under threat: the annual value of storm protection – BZD$382 million, annual earnings in Government taxes, tourism and fishing – BZD$151.6 million, annual national sports fishing – BZD$113 million, and carbon sequestration – BZD$6.8 million. 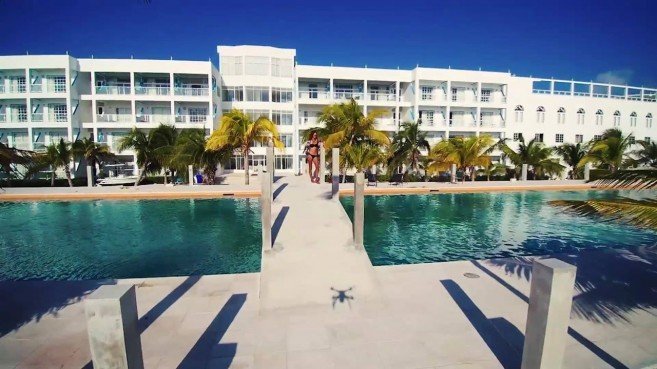 There are about 25 fisherman camps on the atoll, but no residences or urban communities, but there are three high-end eco-tourism resorts: Turneffe Flats, Turneffe Island Resort and the Blackbird Caye Resort. A new player is the 95-room Belize Dive Haven. The Oceanic Society has a research facility on Blackbird Caye, and the University of Belize’s Environmental Research Institute for years has operated a Marine Research educational facility on Calabash Caye, where the Belize Coast Guard now has a forward operating base. But increasing private ownership within the Atoll since 2005 has led to many unsustainable practices: the destruction of mangroves and dredging of seabeds, which are important marine habitats. 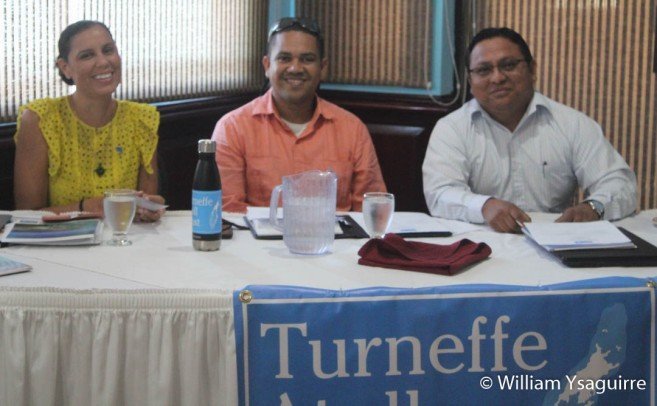 The Turneffe Atoll offers tremendous benefits of almost inestimable value to Belize’s tourism and commercial and sport fishing sectors, argued the Trust’s executive director Alex Anderson. Its 300 square miles encompass coral reefs and islands which enclose two lagoons and are home to 260 fish species and 77 plant species, and its mangroves are a natural habitat for many more species of birds and other wildlife. These include threatened and endangered species such as the American Saltwater Crocodile, the Antillean Manatee and the Hawksbill turtle, with two important spawning aggregation sites for the Goliath grouper and Nassau groupers. 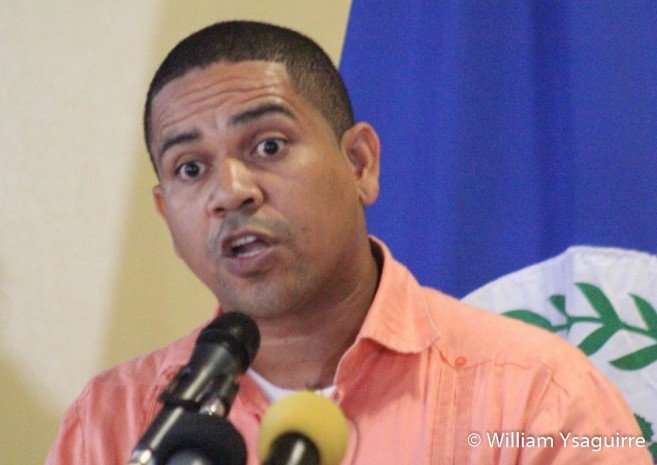 With all low-lying small island states under threat from the impacts of Climate Change, the coastal mangrove forest is important in carbon sequestration. The Trust began its work by lobbying for the landmark passage of legislation to mandate catch and release for three important sport fishing species: bonefish, permit, and tarpon. The Trust then addressed commercial fisheries with improved enforcement against illegal fishing within the Atoll, and the preparation of a comprehensive Turneffe Atoll Marine Management Plan, which culminated with the establishment of the Turneffe Atoll Marine Reserve on November 12, 2012. The Trust then moved to further protect one of two most important commercial species fished in the Reserve, with a comprehensive baseline study of Queen conch population in 2014-15 to ensure the sustainable management of its fishery. Spiny lobster fishery within the Atoll is also under threat, and the Trust is working with some 950 commercial fishermen who work in the area to ensure their fishing practices are sustainable.
This important natural resource remains under threat from many unsustainable development practices by man, such as mangrove deforestation and dredging which destroys the seagrass beds and back reef flats so important to the sports fishing sector. Eco-tour operators and commercial fishermen have united to form the Fishermen and Eco-Tourism Alliance (F.E.T.A.) to protect these important habitats on which their livelihoods depend.
In this context, it is astounding that the construction of a 95-room hotel should have been allowed to proceed, without so much as an Environmental Impact Assessment. The hotel structure is nearing completion, yet its very existence tramples over all the rules and regulations which have become law since the passage of the 1992 Environmental Protection Act. 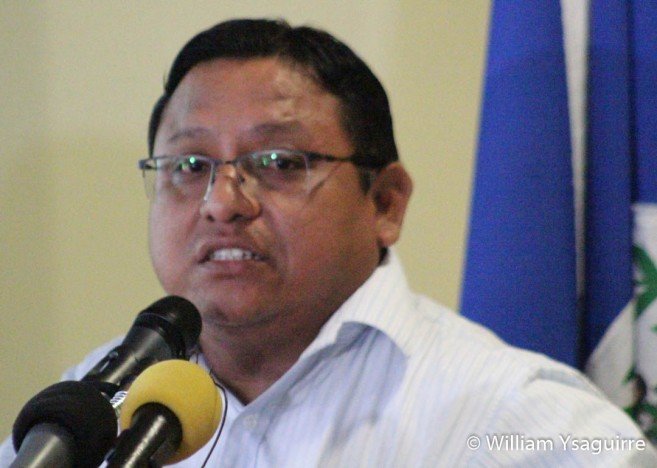 Consultant Valentino Shal prepared a new report on how unsustainable and unregulated development is threatening the existing benefits. He cited a litany of rules which are being violated or ignored: the Turneffe Atoll Coastal Zone Management Guidelines (ICZMP), the Fisheries Act, Sport Fishing Regulations, Environmental Protection Act, EIA Regulations, Forest (Protection of Mangrove – Updated), Wildlife Protection Act, Mines and Minerals Act, Belize Port Authority Act, the Turneffe Atoll Marine Reserve Order and the Turneffe Atoll Marine Reserve Regulations.
The hotel development also flies in the face of several development plans prepared by the Ministries of Natural Resources and Economic Development: The National Biodiversity Strategy and Action Plan, and the Growth and Sustainable Development Strategy (GSDS). The GSDS recommends that investors be attracted for development which will not pursue the “all inclusive” hotel model, to reduce haphazard and unplanned coastal development. It also advises that highly vulnerable coastal forests and beach vegetation be protected to meet the national target of 10%.
The Ministry of Tourism and the Belize Tourism Board have their 10-year National Sustainable Tourism Master Plan (Belize Reef Region), which recommends only mid-level growth for overnight accommodation, to be kept to a minimum in sensitive sites, with no additional hotel accommodation rooms to be built from 2012-2020. Growth should be limited to necessary improvements to existing homes, resorts, lodges, and other facilities, and to only develop 37 new accommodation rooms in low-density facilities for the years 2025 to 2030.
In a report on the blue carbon value of the Atoll commissioned by the Trust and prepared by Tony Fedler Ph.D. of Gainesville, Florida USA in October 2018, the value of the Turneffe Atoll in shoreline protection against hurricane storm surges is estimated at $382 Million. Earnings from eco-tourism, sports fishing, and diving are easier to quantify, and exceeded Bze $100 Million in 2011; and commercial fisheries within the atoll yielded another $514,000 to the economy. The carbon sequestration of the mangroves and seagrass beds are key to mitigating Climate Change Impacts, and the blue carbon value is estimated at $3.4 Million over a 25-yer period. 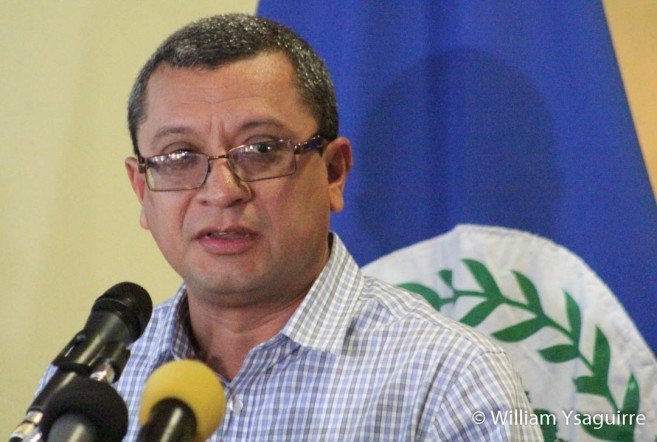 Senator Osmany Salas, appointed by the community of environmental and conservation non-governmental organizations, moderated the discussions which followed among fishermen, tour operators, and other stakeholders. 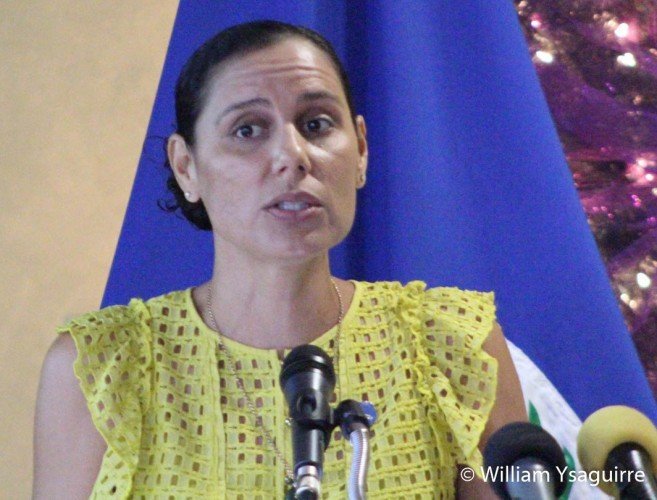 Oceana Belize Executive Director Janelle Chanona, who led the successful lobby to ban offshore petroleum exploration and exploitation in Belize’s marine waters, urged those present to join the fight to protect our marine areas and to get government agencies and our decision-makers to follow their laws.