Special Constable Orlando Mendez and Police Constable Nelson Ramos, formally attached to the San Pedro Police Formation were freed on extortion charges on Wednesday, July 17th. On June 15, 2017, American tourist Timothy Braun accused Mendez and Ramos of shaking him down for US $300 to drop a marijuana charge. 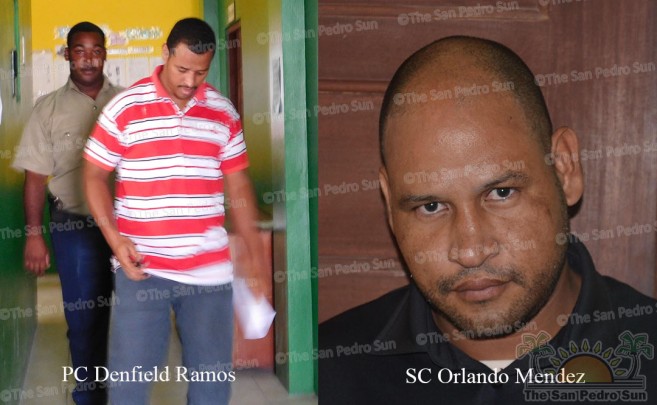 At the time of the incident, Braun told The San Pedro Sun that while he was enjoying his cigarette, he was approached by three San Pedro police officers on a golf cart. They accused him of smoking marijuana. Braun informed the officers that he was smoking tobacco, but was promptly told they were taking him in for smoking weed. He was handcuffed behind his back and placed on the back seat of the golf cart. According to Braun, the officers, all in full uniform, drove him to a dark area along the Boca del Rio Area just before reaching the Sir Barry Bowen Bridge. There, the officers removed his handcuffs and led him to the water’s edge, where one officer put a gun to his head and stated that if he did not give them all his money, he would end up in the river. Fearing for his life, Braun explained that his cash was at the Airbnb apartment he had rented in downtown. The police then drove him to the location, and after he let them in, they ransacked the apartment and stole $300US cash, brazenly dividing up the cash in front of him. According to Braun, the officers told him that if anyone were to ask, he was to say he was drunk and the police escorted him home. They also warned that should he go out again that night, or report what happened, there would be consequences.
Since the incident, Braun has stayed away from Belize and did not testify, but former co-accused, Constable Malcolm Ramirez, who today remains an active member of the San Pedro Police Department agreed to testify for the prosecution in exchange for immunity. According to Ramirez, while on patrol, they spotted a group of Americans who smelled like marijuana. A search located the “joint” of weed on Braun, but as he was being taken in custody, the others asked what they could do to help their friend. Ramirez said it was they who offered the money to be shared between them; he got US$50, and Mendez and Ramirez took US$125 each.
Justice Colin Williams, presiding, ruled that a conviction would be unsafe, as the prosecution only had Ramirez’s testimony, not even Braun. While Ramirez tried to lessen his role in the shakedown, he was nonetheless an accomplice, despite claiming he walked away afterward.
Defense attorney Darrell Bradley, submitting that there was no case to answer, urged consideration of Ramirez’s motives in turning on his colleagues, giving police a statement while being detained to be charged, and that whatever he said was discredited and not sufficient in legal terms to sustain a conviction by jury. The court agreed and directed a verdict of acquittal to the nine-member jury.