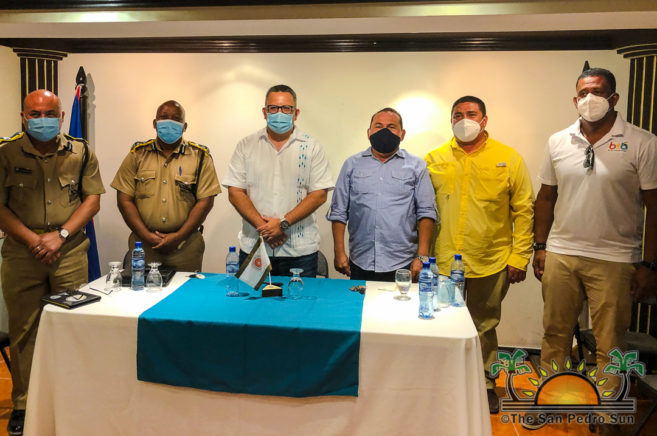 To discuss and find solutions to challenges tourism is facing in San Pedro Town and address the recent increase in reports of questionable police conduct, a meeting was held on Tuesday, May 18th, with central and local government officials and island stakeholders. 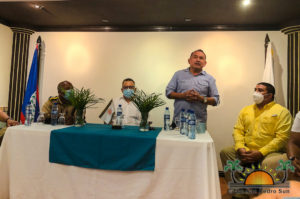 Held at the San Pedro Town Council conference room, Honourable Andre Perez welcomed the small group of stakeholders and thanked the esteemed panel in attendance. Perez emphasized the importance of working together for the betterment of the island and its tourism industry. ComPol Williams followed by first saying that tourists must have a positive experience when visiting and that the last thing they should fear is the local police force. In response to recent reports of police extortion and intimidating behavior when enforcing the mask-wearing law, ComPol informed that four officers had been identified and removed from the island police force. Police continue their investigation and will process internal reprimand for the officers found responsible. He pointed out that the four officers will be replaced with those here for the “right” reasons, to serve the community and not take advantage of it. ComPol also commended Commander of Region Four Superintendent Christopher Noble for the decline in crime since his tenure on the island. He added that plans are underway for a new police substation on northern Ambergris Caye with a complement of twelve officers with motorcycles.

Honourable Kareem Musa followed, referencing the recent social media and Trip Advisor posts reporting negative experiences with local police. “They say any press is good press, but to me, bad press can harm our tourism product, and we cannot allow that to continue…this team is committed to dealing with the situation and assuring the best experience possible.”

BTB Chairman Evan Tillet added that BTB would be working with other entities such as the Belize Tourism Industry Association in developing and providing public relation training for police officers. 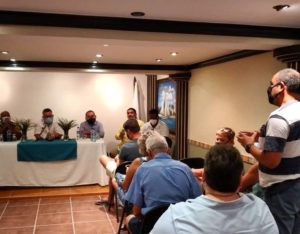 The panel then took comments from those in attendance. Of primary concern is enforcing the mandated face-mask regulation, with some hoteliers and restaurateurs saying foreign guests do not always cooperate with the law. It was agreed that those who refuse to comply should be ticketed; however, police must demonstrate courtesy and professionalism when doing so. With the amended Statutory Instrument No. 54 of 2021 in effect, allowing persons to no longer wear a face mask or face covering when moving on a golf cart, it is hoped this will alleviate many stops police are making to unmasked riders and drivers.

Other issues discussed included police officers intimidating and extorting business owners for cash or amenities and the need to keep curfew at midnight indefinitely. In closing, BTB Chairman Tillet assured that all concerns are considered and thanked those who attended, emphasizing the importance of keeping the lines of communication open.