Home » Crime » After more than a year in prison for manslaughter, Caye Caulker police constables released on time served

After more than a year in prison for manslaughter, Caye Caulker police constables released on time served


Police constables Leonard Nuñez and Hallet King, formerly attached to the Caye Caulker Police Formation, are free from remand as of Tuesday, August 13th. They had been incarcerated for the death of Hilberto Sotz, who died under police custody in 2015. The pair were facing manslaughter charges and was taken to the Supreme Court to be sentenced by Justice Colin Williams. She sentenced them to nine months’ imprisonment, minus time served. Nuñez and King had already spent over a year on remand; thus, they were released and walked out as free men from the court. 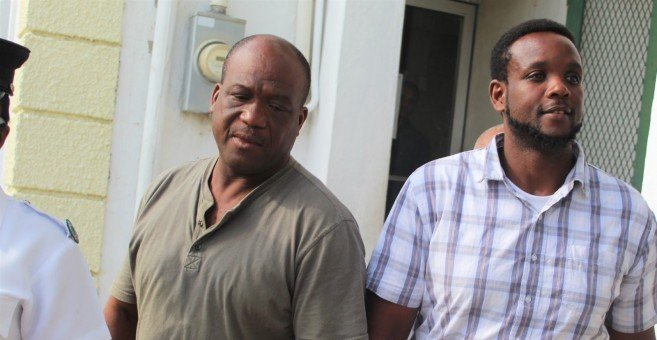 The constables had previously been arraigned on a count of murder, which was later reduced to manslaughter on July 15th, and were awaiting their sentence. Sotz’ family attended the hearing and were disappointed with the decision. Hilberto’s mother, Carmelina Sotz, spoke to the media outside of the court, expressing how hurt she was after finding out that the constables were set free. “This is not fair,” she said, questioning the judicial system of the country. The Sotz family is also considering filing a lawsuit against Nuñez and King because the court did not rule on any compensation to the family for their loss.
On June 8, 2015, 18-year-old Hilberto Sotz was detained for questioning following a burglary in Caye Caulker, even though police were told that that the young man was away from the island when the alleged incident took place. Sotz was fatally brutalized by Nuñez and King. A post-mortem examination indicated the cause of death was “vascular shock, pronounced massive heart thrombosis, acute post-traumatic cerebral edema, as a result of trauma to the head and body.” This provided the needed evidence to place charges against the police officers.
It is unknown if or when Nuñez and King will be reinstated in the Belize Police Department.