Exceptional youth from across the country were honored on Friday, December 4th at the Belize Biltmore Plaza as part of the 2015 Belize Youth Awards. Organized by the Department of Youth Services, the Youth Awards marks the official culmination of Youth Week and is an annual event that rewards young people for their contribution to the country’s development. Among this year’s recipients was a student from Caye Caulker’s Ocean Academy, who received the Individual Environmental Award. 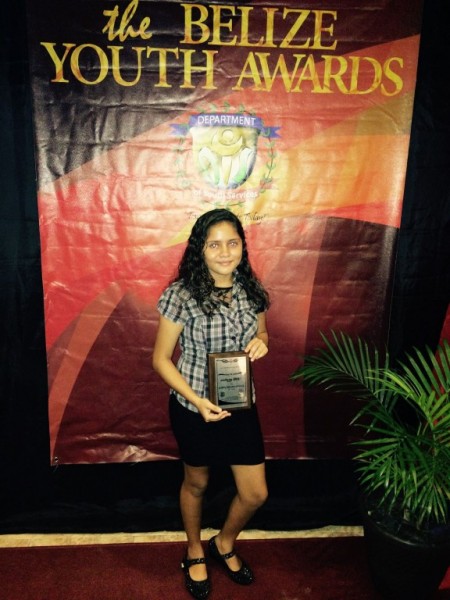 Sixteen awards, both individual and group, were distributed at the ceremony. The first category was the Environmental Award, with Ocean Academy’s Adaly Cartagena receiving the individual award and Corozal Junior College’s Eagles Environmental Club receiving the group award. Cartagena was awarded for starting a Youth manatee Club on Caye Caulker to continue the legacy of Captain Lionel “Chocolate” Heredia and contribute to the current work of Jamal Galves to protect the Antillean manatees.
The next award was the Enterprise Award which went to Belmopan Active Youth Group, who also received the Youth Club Award, while Kenrick Ashton Gonzalez received the Enterprise Individual Award. Special mentions for the Enterprise Award went to Iniki Zuniga and Catryce Faye Cattouse, while special mentions for the Youth Club Award went to Energy for Life Youth group and The CAYA Girls Club. Taking the Innovation Award was Crystal Samos, with special mentions going Cantae Guy and Leeworth Robateau. The Media Award went to David Smith with Sylvian Neal taking special mention. Raheem Mariano received the Arts and Culture Award, while Kadeem Bennett received the Youth in Agriculture Award. The Differently Abled Award went to Janae Angelee Matute with special mentions going to Mamari Tesucun and Patrick Bustamante. The Pacesetter Award went to Rafael Roberts Castellanos, with special mentions going to Celine Lopez and Verlie Lamb. The male Youth in Sports Award went to Mark Anderson, while Kori Diego received the female Youth in Sports Award. Special mentions in the Youth in Sports Award went to Alexander Alvarado, James Bregal, Jayda Brown and Anna Patricia Gonzalez. Aidian Flowers received the Academic Excellence Award with Gem Turner and Tanigi Palacio taking special mentions. The largest award category were the CARICOM Youth Ambassador which went to Jeanelle Mencias for Outstanding Leadership, Bryton Codd for Outstanding Youth, William Mahler for Outstanding Achiever and Shaquille Young for Outstanding Artist. The final and most prestigious award of the event was the Youth Minister’s Award and that went to Andrew Jeffrey Munnings.
The special guest speaker for the event was Executive Director of USA based non-profit organization Domus Kids, Mike Duggan. “See young people as resources and not as recipients of services that you give. Actively get their input, have the trust and confidence in them that they know what they are talking about, that they know what they need, and they know what their communities need and they have the solutions,” said Duggan during his inspirational address.
Also speaking was Minister of State in the Ministry of Education Youth and Sports, Honorable Elodio Aragon Jr. who remarked on the importance of honoring Belizean youth. “It is both timely and relevant for us to acknowledge the positive and selfless contributions being made by the youth to our society. Our young people continue to play pivotal roles in Belize’s development. This is the time to celebrate their achievements as we commit ourselves to meeting their personal developmental needs,” said Aragon.
At the end of the official ceremony, attendees enjoyed a reception honoring the awardees.
The 2015 Youth Week was held under the theme “Youth, Let’s Make the Dream Work with Team Work” which celebrates young Belizeans for their importance towards the growth and development of the community.

Schools to start re-opening in April