Local politicians have promoted the idea of the construction of a new pre-school, primary and high school in San Pedro Town since May 2017, when the Ministry of Education (MOE) announced the building of 35 new schools countrywide. Ambergris Caye is part of this project, as confirmed by Mayor Daniel Guerrero, the Area Representative Honourable Manuel Heredia, and even Prime Minister Right Honourable Dean Barrow. The schools are planned for north of San Pedro Town, and the news is that a ground-breaking ceremony is scheduled to take place in August of this year. 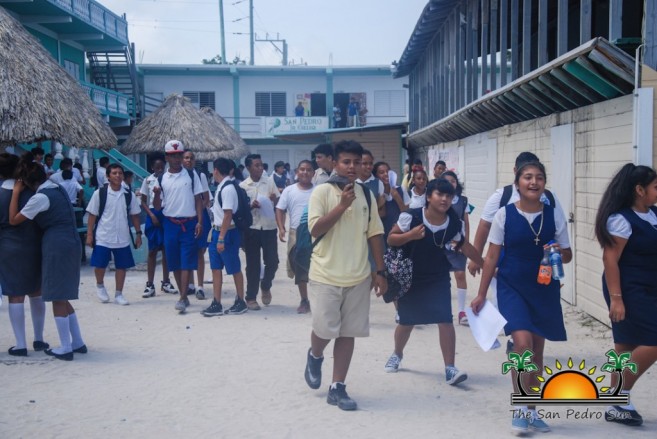 Heredia told The San Pedro Sun that the schools will be located some seven miles north of San Pedro Town and the area is currently getting its last touches before the ground-breaking. “We are preparing a road which leads to the site where the schools will be constructed,” said Heredia. “The ground-breaking will be held very soon.” The ground-breaking had been scheduled for March 2018, but due to unforeseen commitments from the Minister of Education, Honourable Patrick Faber, the event was postponed. A new date was not announced, and later, Heredia indicated that they needed to do further works onsite before they could start constructing the buildings. This time, however, Heredia said there would be no more delays.
To speed up the process, representatives of MOE visited the site on Wednesday, July 24th to further survey the area. The site is currently being filled with material from the quarry up north, which is near the said site. According to MOE, the school project is expected to be completed within a year and will trump the need for parents to send their children to study off the island. As a government school, transportation will be provided for students, and additional teachers will be hired by the government. The location of the new schools is in an area that is expected to develop in the coming years, and by the time this happens, residents living in future sub-division will already count with schools for their children.
Prime Minister Barrow had previously indicated in March 2018, during the victory rally of the newly elected United Democratic Party Town Council, that funds for the building of the schools had been secured. He emphasized that it was not an empty promise and the schools will get built before the 2020 general elections.
The funding for these new educational institutions is not coming from Central Government’s revenue, but from a Caribbean Development Bank loan to the tune of $70 million. These funds are for the building of the 35 schools across the country, which aims to alleviate the space issue many institutions are experiencing.

The MoECST Receives Donation of 260 Laptops from BSIF