Over 500 residents flocked to the Rafael Angel Nuñez Auditorium in a show of love and solidarity on Saturday November 3rd for the Rosita Baltazar benefit concert. The concert was one of the best that the island has seen in quite some time and the people’s support was equally amazing. The event was organized by the San Pedro Cultural Committee with the support of many organizations including the San Pedro Cancer Society and the San Pedro Dance Academy. 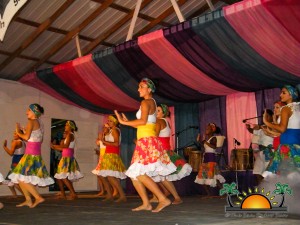 Hosts for the night were David Marin of Reef Radio and Mary Gonzalez of The San Pedro Sun who did an excellent job of introducing the performers on stage. First on stage was the Trisha Davidee Strokes that did her rendition of the Belize National Anthem as well as a prayer. San Pedro Dance Academy then took center stage with five performances, including one of the most loved dances by the colorfully dressed Senior Group entitled “Arrow”.

After the spectacular performances by the San Pedro Dance Academy, it was time for the Belize Dance Company. They commanded the stage with dance presentations from three of Belize’s main ethnic groups: the Maya, the Creole and the Garifuna under the theme “Belize – Diverse Cultures and Rhythms.” With a thrilling Maya performance that 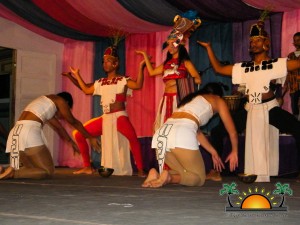 featured the goddess Ix-Chel and her worshippers, gorgeous costumes and pure talent, the Belize Dance Company took over the stage in style. Combined with modern day drumming, their follow-up Creole dances depicted many aspects of the Creole lifestyle with a brukdong soundtrack that paid homage to one of Belize’s three kings: Mista Peetaz.

During the intermission, San Pedro’s very own Natalie Arceo also entertained the audience with a variety of songs, including “Paloma.” Her performance was met with hearty applause and praise.

The Belize Dance Company took over the stage for their final performance which featured the Garifuna culture. From their arrival to the shores of Belize, to the way they have adopted to modern day Belize – there was color, passion and beauty onstage. The final presentation fused all cultures into one final dance entitled “My Belize”. The audience was absolutely blown away by the richness of the performances, which all came to a glorious finale, complete with twirling Belize flags. San Pedro is a hard audience to please, but this performance brought on a standing ovation! It was perhaps one of the best performances seen onstage in San Pedro – and well worthy of a repeat. 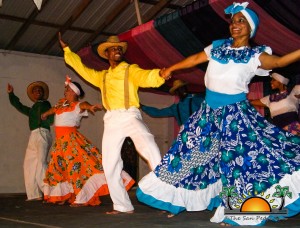 While it not certain as to how much money has been made from the fundraiser as yet, the San Pedro Cancer Society presented the San Pedro Cultural Committee with a cheque of $1,100BZ, all proceeds from the food sale that was organized for that night. Proceeds from the event will all be tabulated and be given to Baltazar as part of the contribution from the people of San Pedro.

Readers may recall that Baltazar, the Belizean artist and choreographer of the local San Pedro Dance Academy, was diagnosed with breast cancer while they were at the European festival “Festival Du Sud”. During the tour, she was forced to leave for urgent medical attention and is now receiving chemotherapy treatment at the Belize Cancer Center in Dangriga. Baltazar has been with the San Pedro Dance 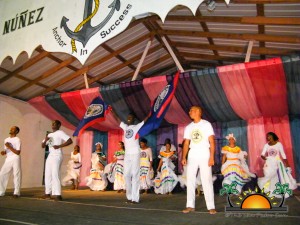 Academy (Dance Company) for over ten years and has been contributing to the development of expressive arts in Belize since 1983. We join the San Pedro community in wishing her well as she undergoes treatment.