Carnival Road March 2016: A parade of Patriotism and Culture!


Heavy rain just minutes before the commencement of the annual Carnival Road March in Belize City, did not dampen the spirits of thousands of patriotic Belizeans on Saturday September 17th. The event is part of the September Celebrations and it started pre-dawn with the annual jouvert, culminating in the afternoon with a grand carnival parade, complete with elaborate, glittery and feathery costumes. 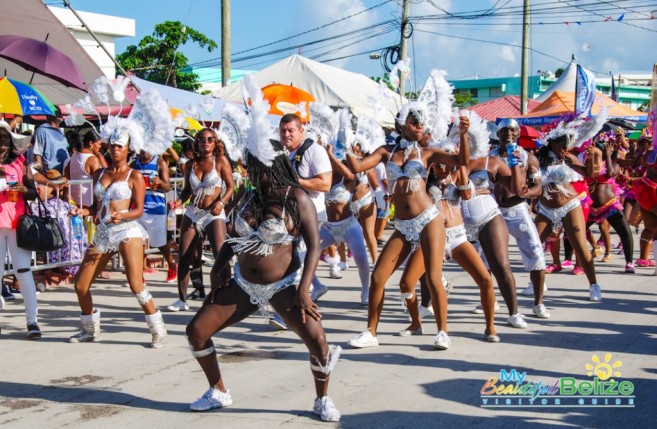 The morning jouvert set the bar high for the afternoon carnival road march, which left the Yarborough Area south of Belize City, and made its way along Central American Boulevard, culminating on Marine Parade at the BTL Park. From steel pan bands mounted on large double deck trucks, to blaring speakers playing Soca beats, the atmosphere was celebratory and filled with color and fun, as hundreds of dancers lit up the carnival route.

The gruelling temperature and humid atmosphere did not faze the thousands of spectators lining the parade route as they cheered on the dancers as they made their way to the BTL Park. Stationed at strategic points along the way were a set of judges, awarding points to the carnival groups for some fabulous prizes.

Following the announcement of the winners, an after party was to take place at the park, but it was cancelled due to a shooting incident at the end of the parade. However, despite that disturbance, Carnival 2016 has been declared another successful event, and Belizeans are eagerly looking forward to next year’s once again!

The next big parade and celebration will be taking place on September 21st, Independence Day. San Pedro Town’s parade is scheduled to start at 10AM at Boca del Rio, while Orange Walk’s carnival parade is expected to start around 3PM, with official opening ceremonies starting at 1:30PM at Central Park.

Letter to the Editor: Thoughts on Carnaval 2013