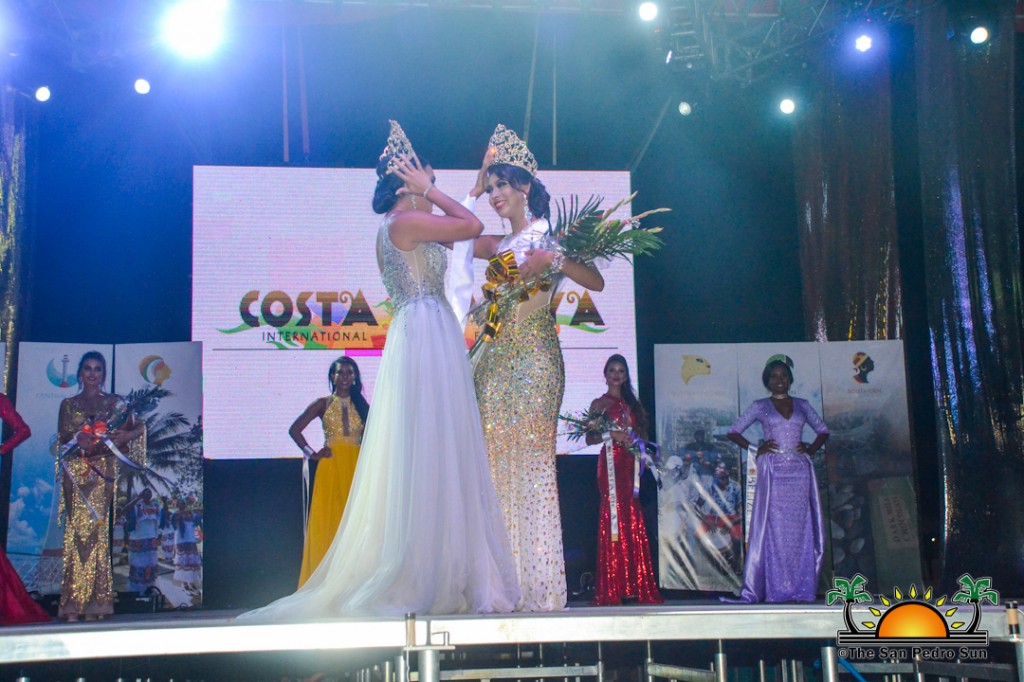 Taking the 2018 title of Reina de la Costa Maya is Mary Cruz Cardona Galindo of Honduras! Charming the judges and the crowd, Mary Cruz was able to walk away with the crown and title of Miss Costa Maya International 2018-19. She was selected after an elegant show of beauty, glamour and culture onstage at the Honorable Louis Sylvestre Sporting Complex on Friday, August 3rd. 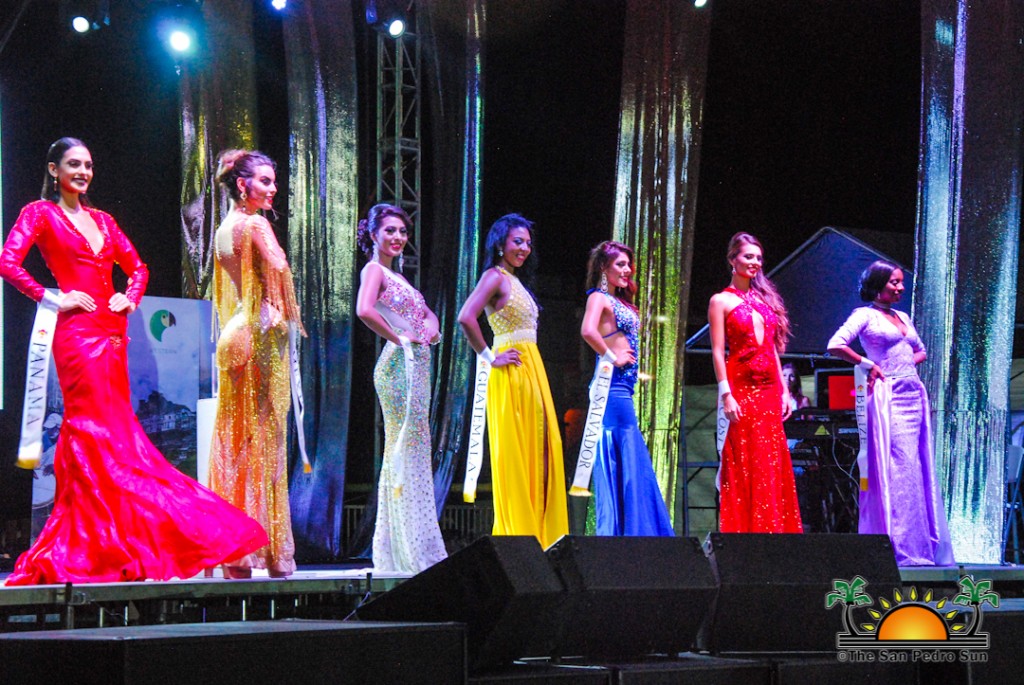 The pageant is the largest international pageant held in Belize, and saw the participation of beauties from all Central American countries (except Nicaragua) and Mexico. The lovely contestants were Marcia Moody of Belize, Adriana Moya Alvarado of Costa Rica, Naydin Madeline Valladares Renderos of El Salvador, Hilary Cumings of Guatemala, Mary Cruz Cardona Galindo of Honduras, Cynthia de la Vega of Mexico, and Emigdielys Arlyn Samaniego Batista of Panama. Leading the night’s events were the affable hosts Eiden Salazar Jr. and Daedra Haylock.

Kicking off the show was the talented Alma Caribeña dance troupe from Mexico, with their fantastic acrobatics and showy costumes. Their dance performance was the perfect segue into the contestants’ elaborate and breathtaking cultural costume segment. 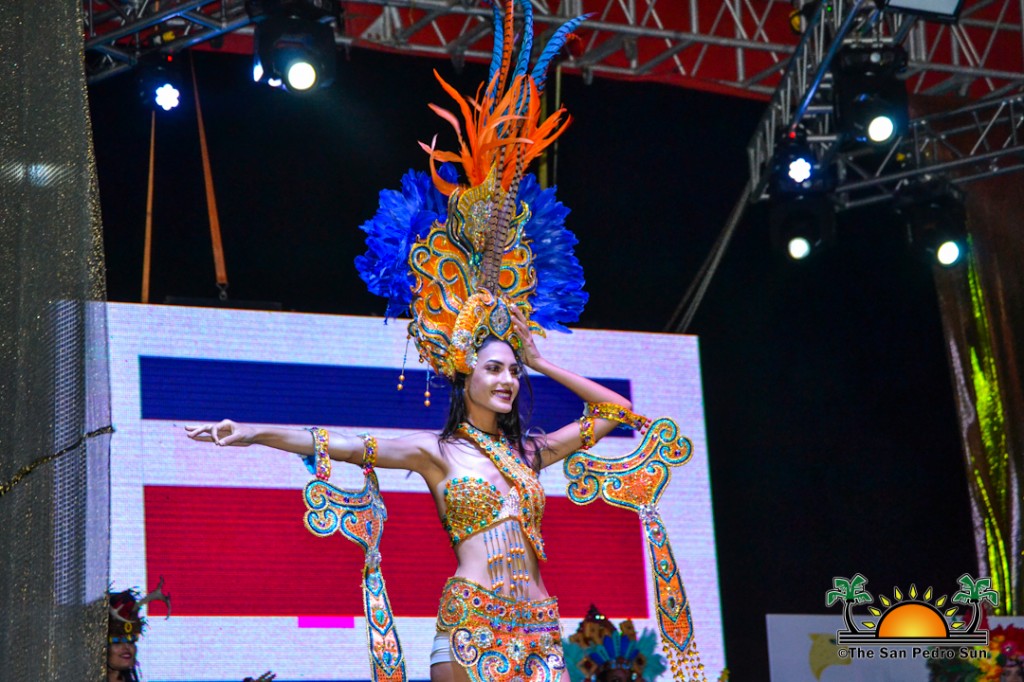 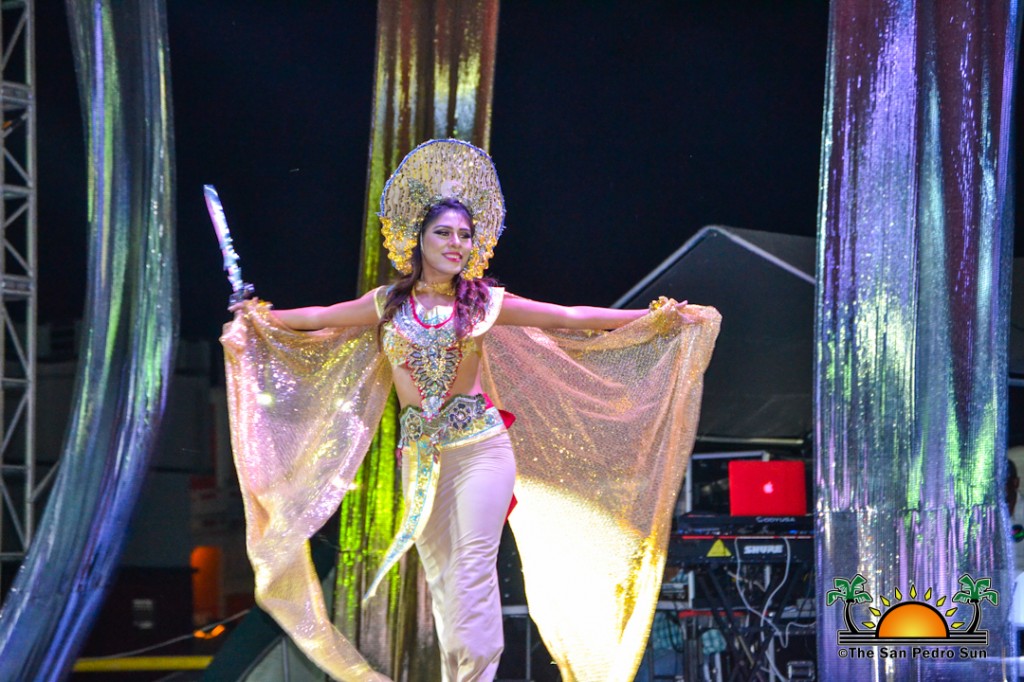 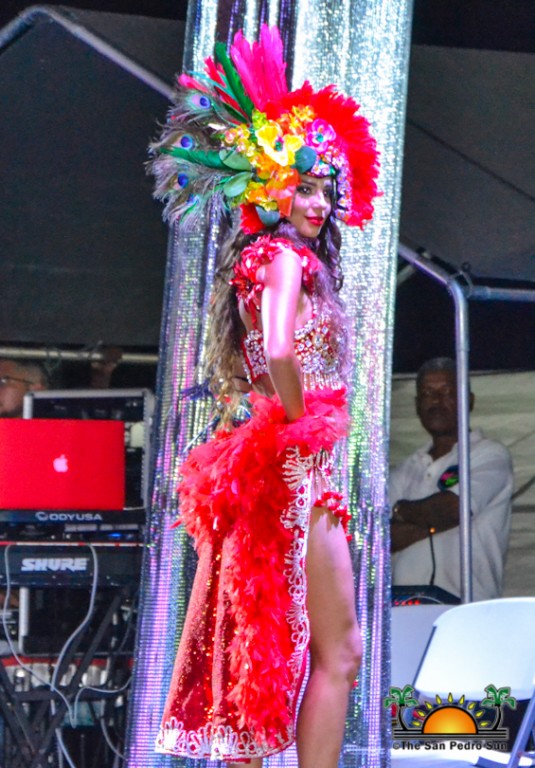 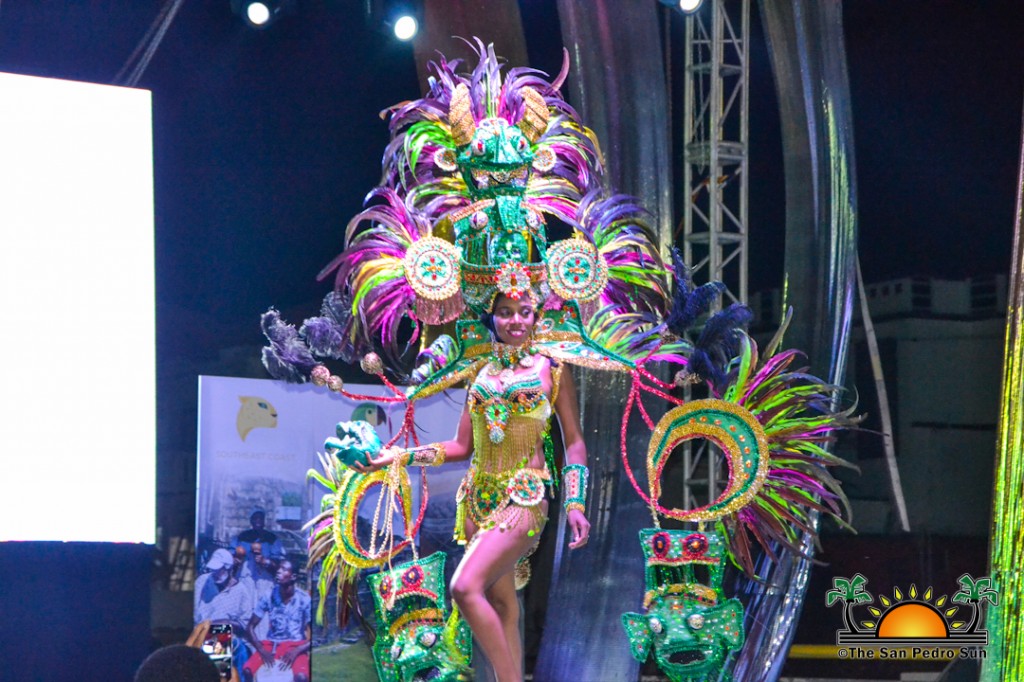 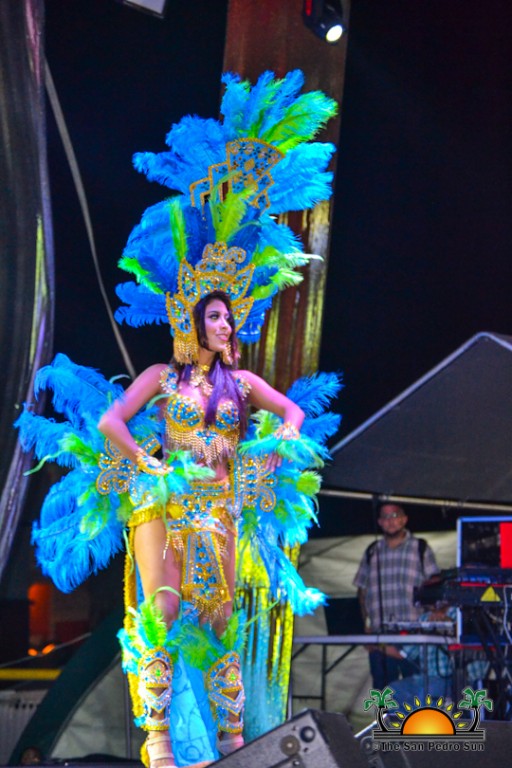 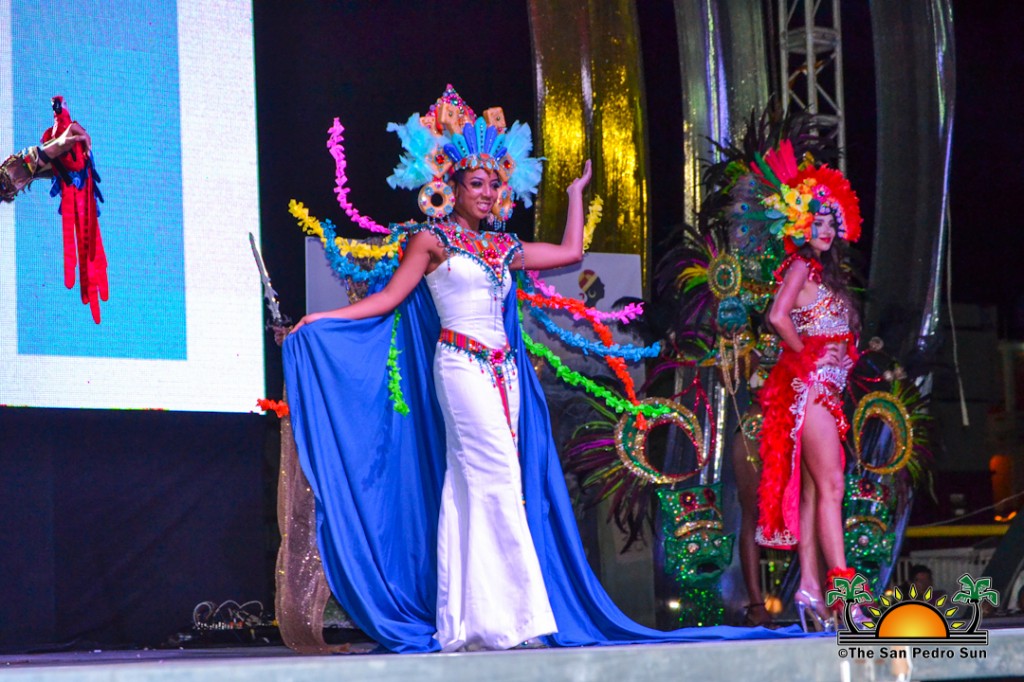 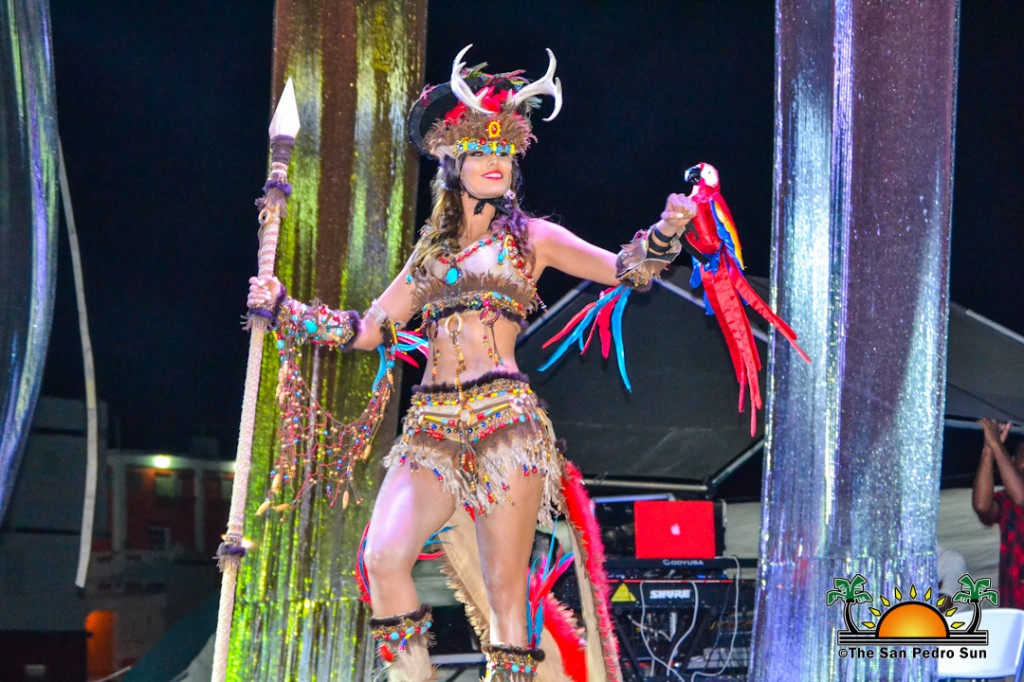 Feathers, beads, artistry and attitude took the stage by storm, and each beauty proudly modeled the handiwork of craftsmen from their respective country. Judges for the night were Gus Tabony, Mireya Marin Castillo, Andres Estrada, Karen Bevans and Phillipo Alario. Part of the pageant points had already been tallied from the previous night’s show, which included preliminary judging. 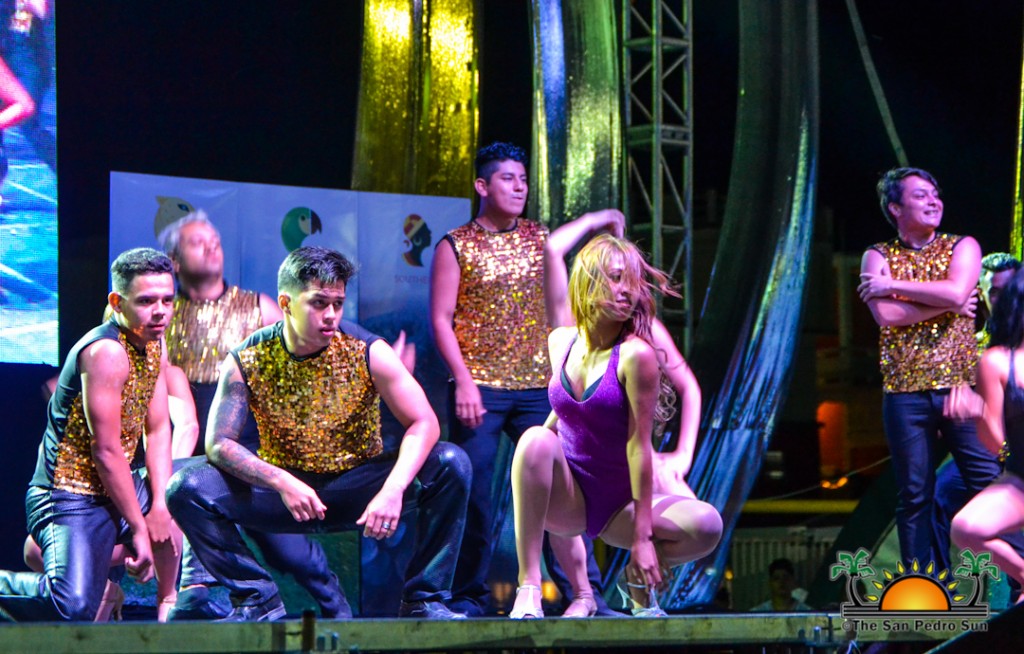 After their cultural display, the beauties headed backstage to get ready for their dance performance. Grupo Crash from El Salvador led the intermission, with a medley of performances that had the crowd entertained. After their performance, the delegates once again took the stage to perform a fabulous dance routine choreographed by Barbara Brown.

Hosts Eiden and Daedra introduced Alma Caribeña’s next troupe of dancers, and exited the stage to allow the performers to take over the stage. Dance after dance, the displayed their talent and affinity for acrobatics.

Their energetic performance was followed by the swimwear segment of the pageant. The ladies brought the sass and fun onstage when they revealed their multi-hued swimwear, sponsored by Star’s Island Fantasy Boutique. The crowd was loudly appreciative and judges made notes as each contestant sashayed across the stage and modeled her swimwear. Once again, they broke away to prepare for the next segment, and Grupo Crash brought out their performances to keep the audience entertained.

The highlight of the Reina de la Costa Maya pageant is definitely the evening gown segment. Stunning dresses in varying shades were modeled by the contestants, who had worked long and hard for their moment in the spotlight. 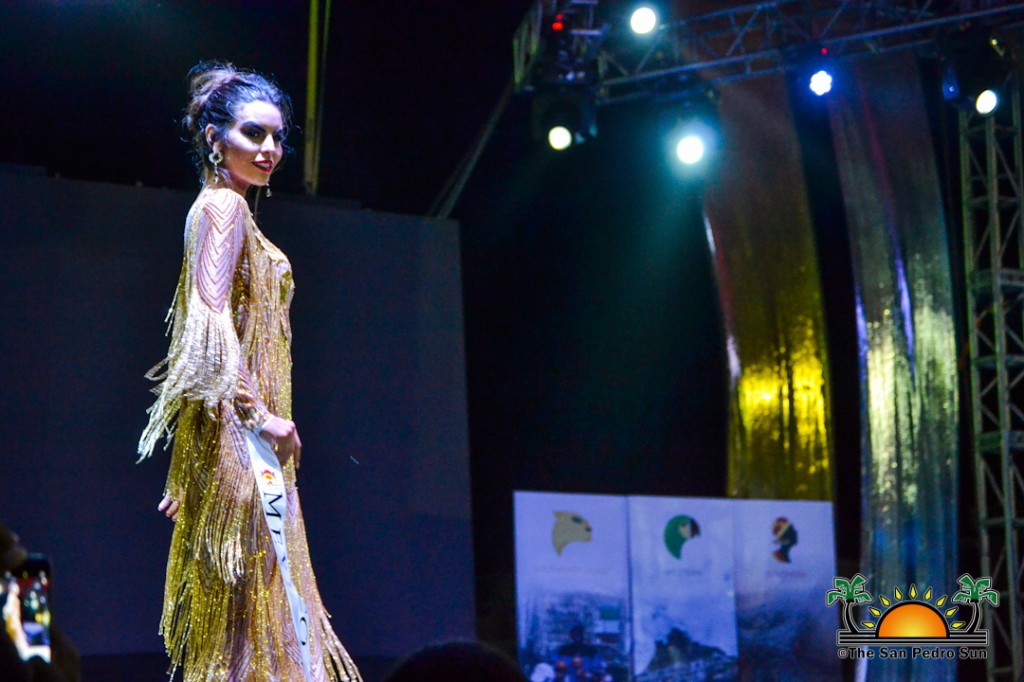 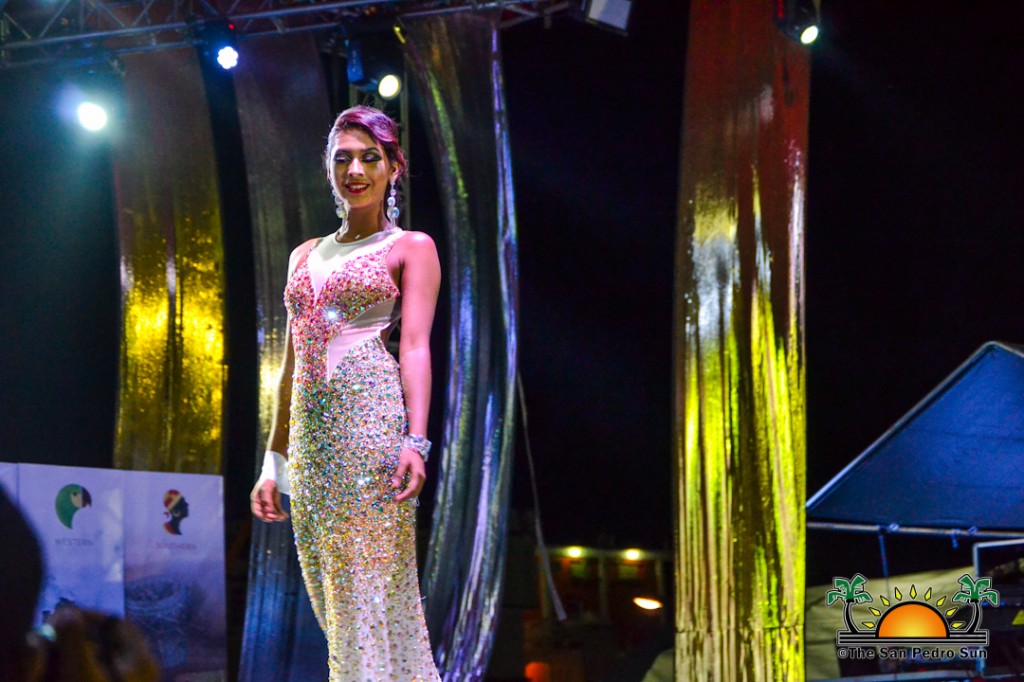 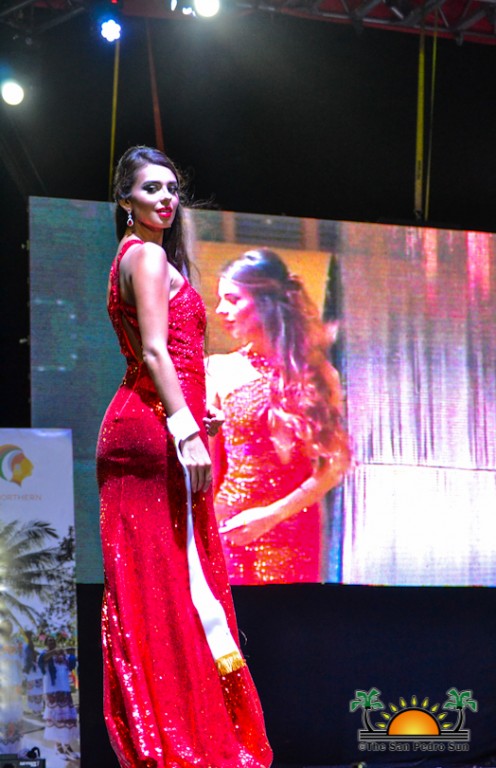 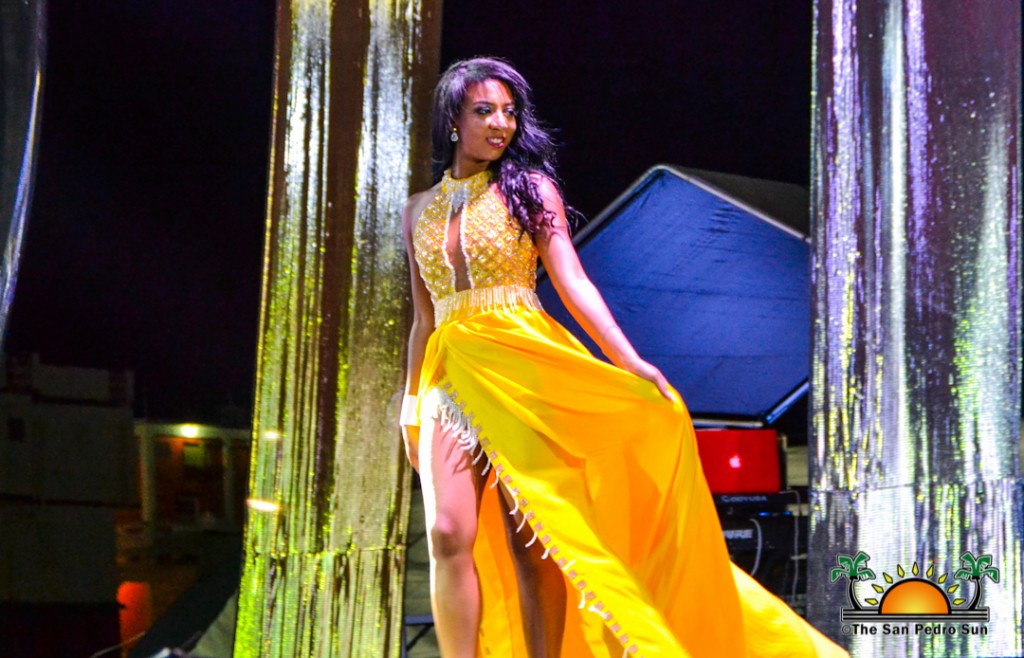 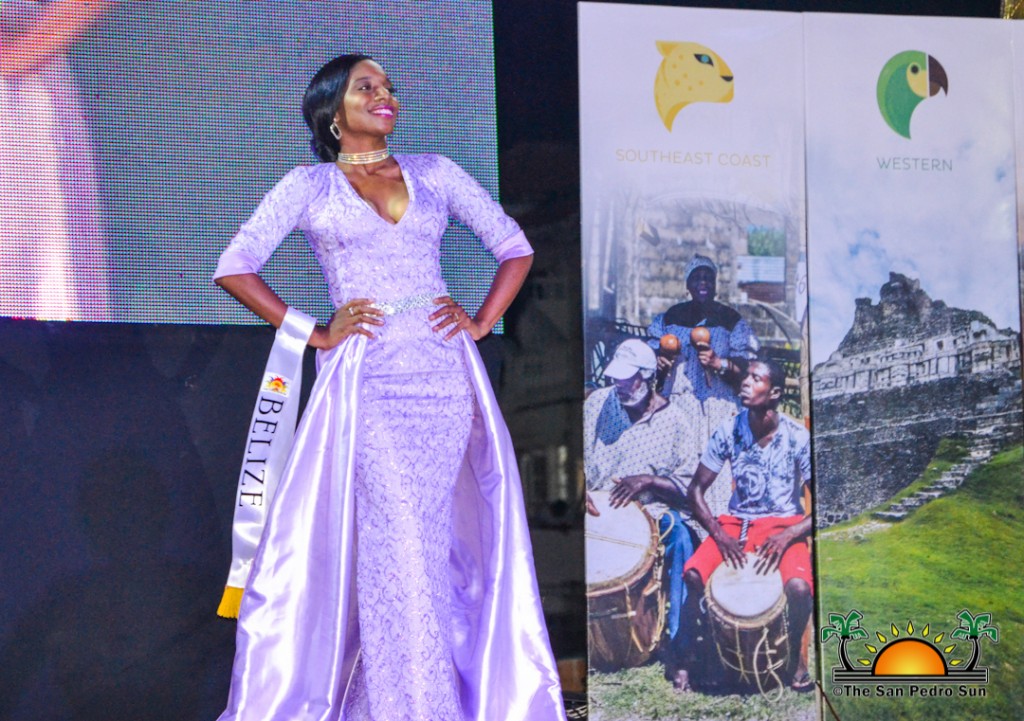 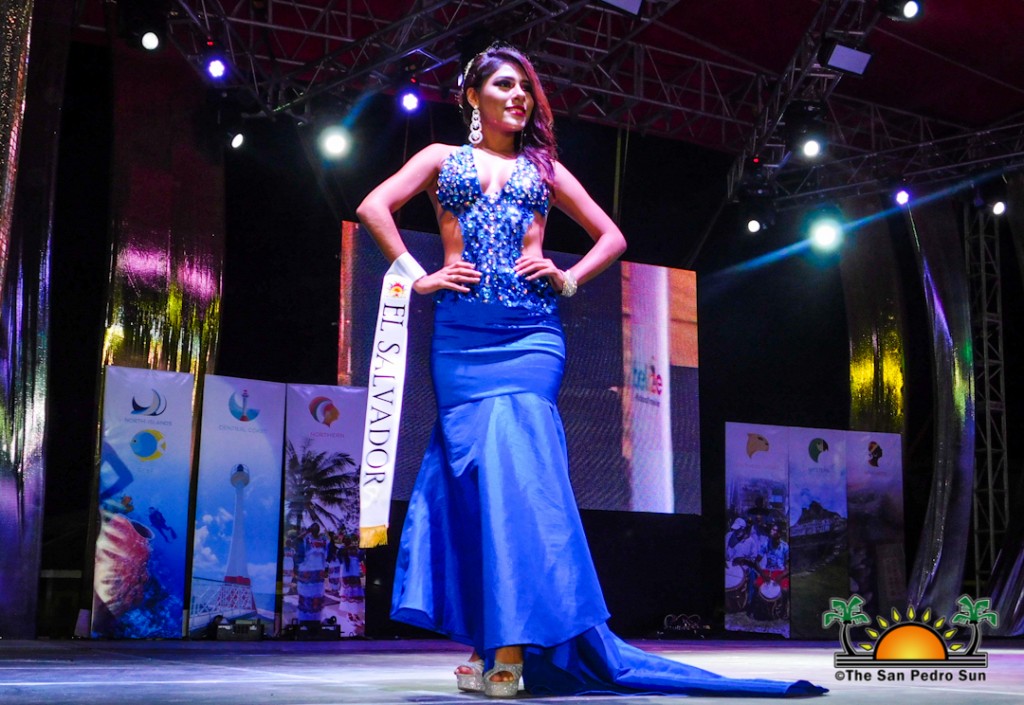 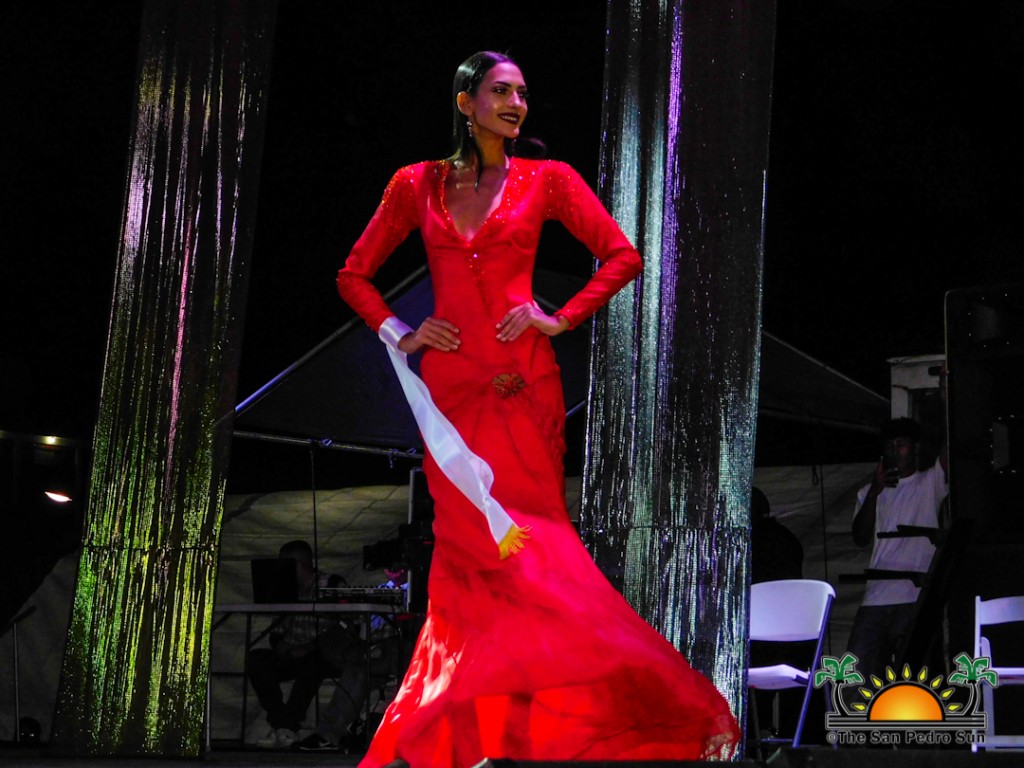 Grace, elegance, sheer beauty and pride of country propelled each contestant on the stage. They waited onstage to face toughest part of the pageant, the Question and Answer segment, and if there were any nerves, it was not apparent.

Answering questions that ranged in topics such as fears, lack of education, violence against women, single-parent households and equality, each young lady was eloquent in delivering her answer. After much applause for their poise and responses, they awaited the final deliberation from the judges.
Reigning Miss Costa Maya Michelle Estrella Nuñez gave her final walk across the stage to deliver her farewell address. Visibly emotional, Michelle told the audience that she is officially finished with pageantry as she will be devoted to her studies at the University of Belize. The pageantry world will certainly miss one of its best contestants. Her final walk was to thunderous applause from an appreciative Costa Maya audience. 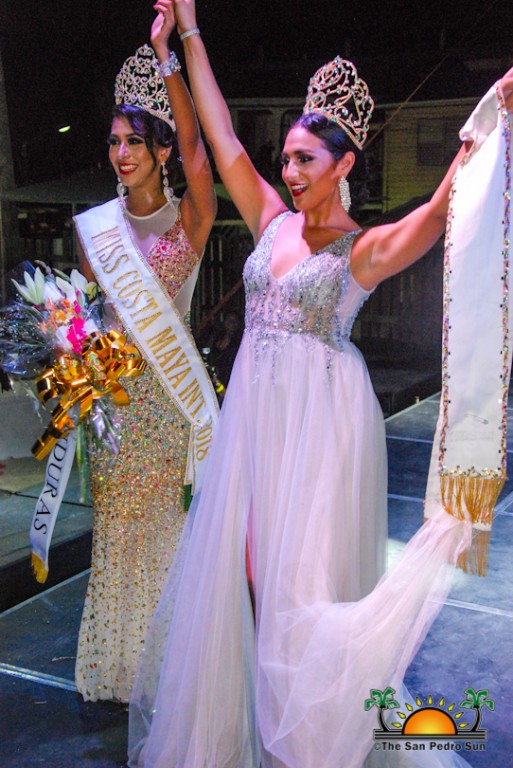 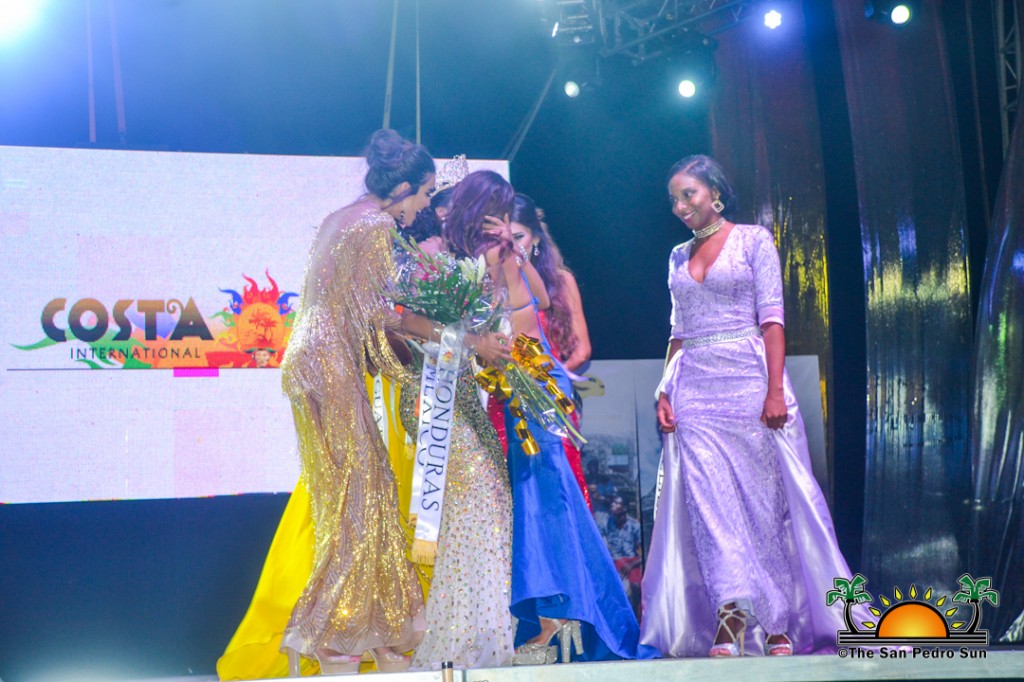 To much drumroll and fanfare, the official winner was announced and she is Mary Cruz Cardona, Miss Honduras! Fanfare, music, loud cheers and a veritable air of excitement filled the grounds as Cardona was congratulated and crowned.

Immediately after, Sweet Pain band struck up their tunes and Chico Ramos joined them to bring the best in Punta Music for the after-party! Congratulations to Mary Cruz Cardona, and may her reign be full of wonderful successes!