Illegal incursions by Guatemalans into Belize’s pristine forests continue unabated and create a great challenge to conservation efforts, especially in the Chiquibul National Park. In fact there has been a shift from the illegal extraction of Xate palm leaves and logging to a more lucrative business, the illegal panning for gold. Not only are the incursions illegal, but their activities are posing a major threat to the degradation of the ecosystem. 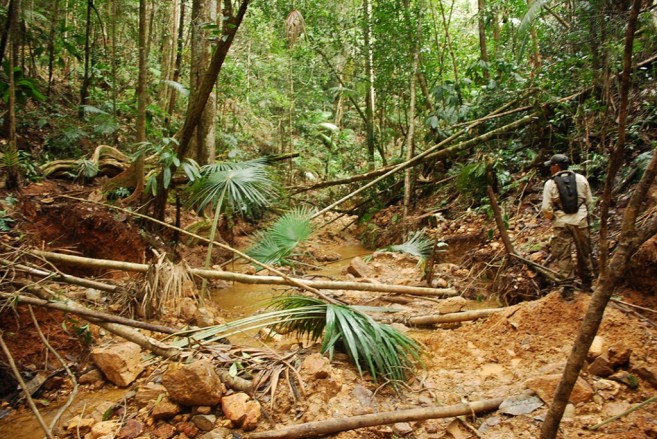 In late 2010, Ceibo Chico Outpost in the southern portion of the Chiquibul National Park was set up to help tackle illegal logging and first evidence of illegal gold panning. But since then, the Guatemalans have been moving further into the country as far as 14 kilometers into Belize’s Chiquibul National Park. It’s a major challenge, and according to Rafael Manzanero, the Executive Director of  Friends for Conservation and Development (FCD), it is making conservation efforts more difficult. “People have become aware that there may be some gold deposits in the southern part of the Chiquibul Area. As a result, there has been a spiral of movement into the zone. We started going into the area in 2010 and at the time we already had a lot of people illegally operating in that area. At the time it was concentrated in Ceibo Chico area and they operated in groups. Now we are finding these groups have disbursed and they are going in small groups into the highland, which makes it even more difficult to contain and patrol,” explained Manzanero who runs the non-governmental organization (NGO).

The illegal operation has been hard to address for the FCD, who with a small staff co-manages one of the largest protected areas, the Chiquibul National Park. The illegal activities include the poaching of spectacular wildlife such as the scarlet macaws, great curassows, brockett deer and peccaries; the extraction of non-timber forest produce and primarily hardwoods such as Belize’s national tree – the Mahogany, which is being illegally smuggled across Belize’s western border. In addition, the constant looting for Maya artifacts is extensive, and incursions as a result of the agricultural expansion are dramatic; the extraction of Xate and now even illegal gold panning. Manzanero said that while it is hard to estimate, the loss to Belize is in the millions of dollars and the problem is rapidly impoverishing the ecological processes and the stability of the country’s rain forest. 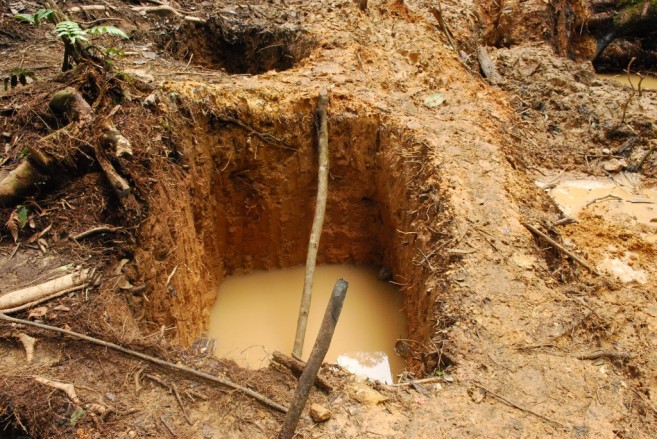 “The impact is wide-ranged, but most importantly it is degrading our national park. Illegal people introduce garbage and other contaminants and now even the fecal materials are being introduced into main head waters, which is a big a concern. We are looking at the major streams and other water bodies where the Chiquibul rivers actually begin. We are now seeing the removal of the banks along the streams through conducting gold panning. The vegetation along the river and stream banks is beginning to fall, blocking water passages. We are talking about main streams that start from the water heads and so whatever happens up stream affects downstream into communities who consume these waters,” said Manzanero.

To help address the issue, periodical patrols are conducted, but the monitoring depends a lot on manpower. “We at FCD are only nine rangers and we work along with other regulatory agencies such as the Belize Defense Force (BDF) and police, but the real challenge is how we can get more man power. One of the requests is to have more of our security forces patrol these areas so that we can monitor a bigger space and extensions. We also require the synchronization of various regulatory agencies, be it Forestry Department or Mining Department, because they all play a key role in regards to the activities happening in the Chiquibul National Park. We need to work more as a team.” 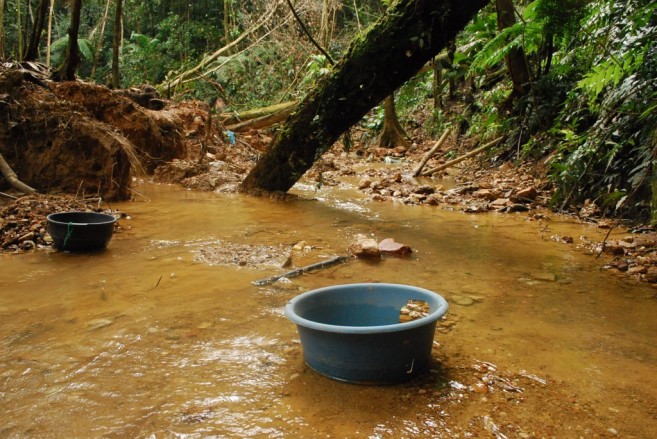 But even when caught, to prosecute the illegal Guatemalans is in itself challenging. Manzanero said that bringing those that are arrested for illegal activities in the national park is difficult for agencies that patrol the area. Adding to that, the fines imposed are small when compared to the damages caused to Belize’s forest. “Fining people for illegal gold panning is rarely successfully when done through our court system. The mining unit has been called upon to assist in these areas but they themselves have expressed their limitations in human resources. We are trying to determine how we can increase fines and how to be better in prosecution,” Manzanero elaborated.

The way Guatemalans operate within Belize is that they each parcel off operational zones along the water bodies in Chiquibul, where they agree amongst themselves to conduct illegal activities. They each form small make-shift camps with materials from the jungle and operate in small groups of up to four, staying in their zone for more than three days. These camps are mostly set up around water banks where they operate during the day, but at night, they travel to a main camp which is normally larger and is in the higher mountainous terrain that is usually difficult to access by Belizean monitoring agencies. “We estimate they are more than 150 illegal Guatemalans operating right now in the Chiquibul area,” said Manazero.

One of the main reasons for the Guatemalan incursion into Belize jungle has to do with the extreme poverty level in the bordering communities in the state of Petén. Such observations have been noted in various bilateral talks between Belize and Guatemalan counterparts at various international forums.