The topic regarding the Petro Caribe funds has indeed been a controversial one and the present government has been under attack, mainly by the Opposition. While Senator Mark Lizarraga, president of the Christian Workers Union Audrey Matura-Shepherd and other stakeholders have been very vocal against the loan-act, the rest of the county will soon be seeing the results of how these funds are to be spent. Prime Minister Barrow was given a 21-day ultimatum from the Leader of the Opposition, Francis Fonseca, to repeal the PetroCaribe Loan Act. In response to this the Prime Minister stated, “I am not going to let that happen because I am absolutely positive that the Belizean people are with me on this.” Barrow added. “It’s unprecedented for you to get monies for development purposes, for upliftment of the people, to be repaid over 25 years at 1 percent,” he continued, “who can be against that? Except those that are thinking along purely political selfish lines.”

On April 29th, Prime Minister Barrow addressed the Opposition’s ultimatum in more details at a press conference which was scheduled to start at 10am, live on Wave Radio and through other media houses. However prior to the press conference he made it clear that the Petro- Caribe program will remain as it is. “I see right through them [the Opposition] and I know the Belizean people do as well,” Prime Minister Barrow continued, “it is only after we went to the house and passed the Supplementary Appropriations Act that details the spending, legitimizes the spending, offers full transparency, that the Opposition made it clear that it would not stop – it would still continue to try and derail PetroCaribe.”
Even though the Opposition has the right to take to the streets and protest in this democratic country, the Prime Minister’s decision has been taken, “there is no turning back with respect to PetroCaribe”. The Prime Minister has admitted that there may be some individuals who are concerned about the language of the Act, and claims this could be a result of misinformation. Therefore, Prime Minister Barrow is willing to meet and explain the effect and purpose of the Act. The Act, says the Prime Minister, applies more going forward than going backward. 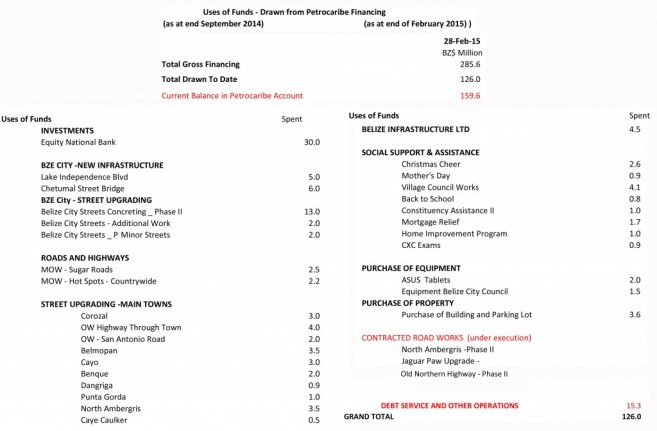 “So the new Act only retrospectively validates and allows going forward, the ability of government to borrow from PetroCaribe without prior House approval. It does not exempt the spending as opposed to the borrowing from Four Square. All the provisions of the Finance and Audit Act as they have repeatedly said this sort of flow through in terms of the government system when money is being spent continues in full measure with full force under the Finance and Audit act and under all government procedures, the storage orders, the finance orders, the requirements, the duties of the accounting officers, all that is very much in place and is the only matrix in the context of which we can spend the PetroCaribe monies.” Barrow went on to quote figures as to how the funds were spent with millions here and there, a total of $126 million and much more to come. 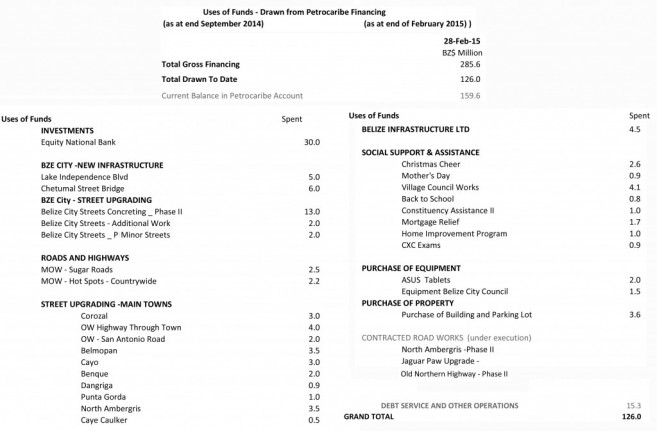 The Prime Minister has given his word to go to the Parliament every three months to report on both the collection and spending of PetroCaribe money. According to the statistics given, the total collected from the PetroCaribe Funds is $285.6 million BZ, and as of February 2015, $126 million had been spent. “The balance is sitting, does this sound like wild spending? In the Central Bank our reserves are boosting and we are going to continue to keep the great assurance of that balance as a rainy day fund and to pay a sizeable portion of the compensation due to the nationalization of BTL and BEL,” stated Barrow.

The majority of the money will fund the buy-back of the Superbond commercial debt and in this way reduce obligations therein; this is hoped to happen after 2017. There is the question as to why the government decided to spend the monies mostly on infrastructure rather than on other social services. The Prime Minister said he was open to other options, but reserves the final say.