Ministry of National Security CEO Felix Enriquez on Visit to the U.K.


Belmopan. July 23, 2019. Chief Executive Officer in the Ministry of National Security Mr. Felix Enriquez is on a visit to the United Kingdom attending to bilateral defence matters.

On Monday, July 22, CEO Enriquez, accompanied by UK Defence Attaché based in the Caribbean, Lt. Col. Anton Gash, made a courtesy call on the Ministry of Defence (MOD). They met with the Rt. Hon. Col. Mark Lancaster, Minister of State for the Armed Forces, and General Officer Commanding London District Major General Ben Bathurst. CEO Enriquez, along with H.E. Perla Perdomo, Belize’s High Commissioner to London, also called on Deputy Director Nigel Baker at the Foreign and Commonwealth Office. 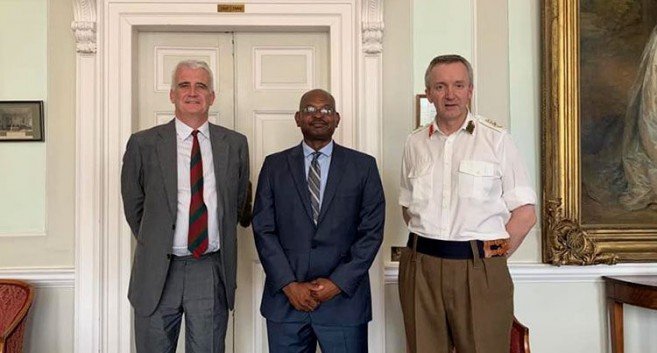 The CEO and UK MOD officials discussed various topics including defence collaboration between Belize and the United Kingdom and improving the training and capacity building of the Belize Defence Force and the Belize Coast Guard.

In September 2018, Rt. Hon. Col. Mark Lancaster along with Belize Minister of National Security Hon. John Saldivar signed the revised Status of Forces Agreement between Belize and the UK.