Recent reports of Measles cases in the region have prompted Belizean health authorities to heighten surveillance on any signs of the highly contagious disease. The Ministry of Health (MOH) raised the alarm after informed of a positive case of Measles in nearby Guatemala, apparently imported to that country from Europe. On Ambergris Caye, the situation is being monitored as well, and islanders are advised that if they are not fully immunized or are not sure of their immunity status, to visit the Dr. Otto Rodriguez San Pedro Polyclinic II to get the Measles-Mumps-Rubella (MMR) vaccine for safe and life-long protection against the disease. 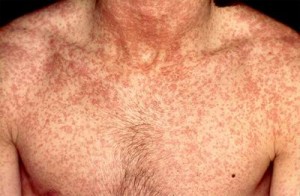 According to the islands Health Inspector, Christina Sanchez, they are on high alert and monitoring the issue after learning about cases in the Caribbean as well. She advises island residents to be aware of this disease and to seek medical attention at the slightest sign of Measles. The disease, which has not been reported in Belize since 1991, comes with high fever, cough, runny nose, red, watery eyes, and a rash appearing three to five days after the first symptoms, spreading all over the body.
In the case of any suspicious infection, the patient will be isolated and investigated to avoid an epidemic. The World Health Organization recommends that every eligible child gets vaccinated to prevent a possible outbreak. MOH is also increasing the coverage of MMR vaccination countrywide, particularly in high risks areas near ports of entries. Between 2016 and 2017, the number of Measles cases increased from 92 to 271, with the Caribbean reporting high suspicious cases coming from the United Kingdom.
Over the last ten years, vaccination coverage against measles has improved to over 95%. The vaccine is available and free of cost throughout the country in all public and health facilities. Before mass vaccination was initiated in 1980, measles caused nearly 2.6 million annual deaths worldwide. According to MOH, the country must strengthen active surveillance to maintain immunity through their vaccination programs to keep up their measles elimination efforts.
Measles is one of the main vaccine-preventable diseases to be eliminated from the Americas while Belize continues to participate in the process of eradicating Polio from the Americas as well.