Doris Soriano is the first ever Queen of Bacchanal


The carnival vibe was felt in full force in San Pedro Town on Saturday, September 5th, with the first ever Queen of Bacchanal Pageant. Organized by Foreva Fancy Boutique, the pageant was all about carnival and was held as part of the September celebrations; embracing the Belizean culture. In a show of color, music and beauty, five lovely contestants competed for the crown, but in the end, it was Doris Soriano who charmed the judges and was crowned the Queen of Bacchanal 2015/2016. 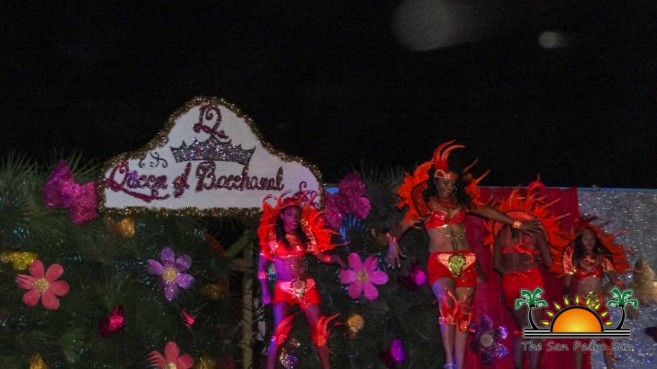 As early as 7PM, eager spectators made their way to the Honorable Louis Sylvester Sporting Arena to get a good seat for the pageant. The pageant kicked off shortly after 9PM under the theme “One People-Breaking down all barriers, promoting unity” inspired by Soca artist Destra. Hosting the pageant were Julianie Feguson and Gerry Badillo, while Enrique De Leon, Darleen Vernon, Suzanna Melo, Barbara Brown, Rosio Santo and Jorge Cerillo had the arduous take of judging. 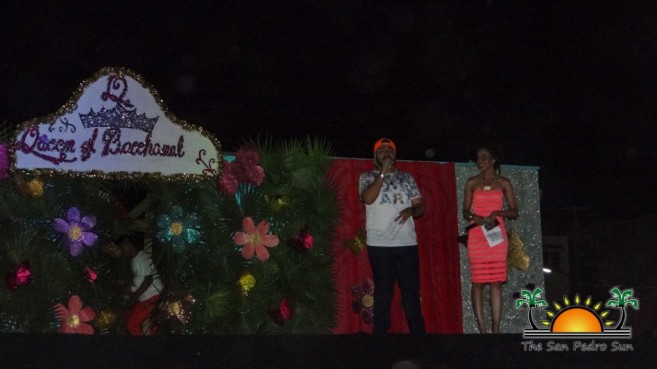 Dressed in stunning red carnival costumes, Shantal Rubio, Doris Soriano, Kristen Fuentes, Leidy Rejon and Adella Banner opened the pageant with a lovely dance perforce to top soca beats of 2015. One by one, the contestants took center stage introducing themselves. After a final parade around the stage, the lovely contestants retreated to prepare for the next segment. Keeping the crowd entertained during the intermission breaks were Jessica Flores, who sang her rendition of Taylor Swift’s ‘Blank Space’ and the San Pedro Jabbawockeez with their acrobatic dance routines. 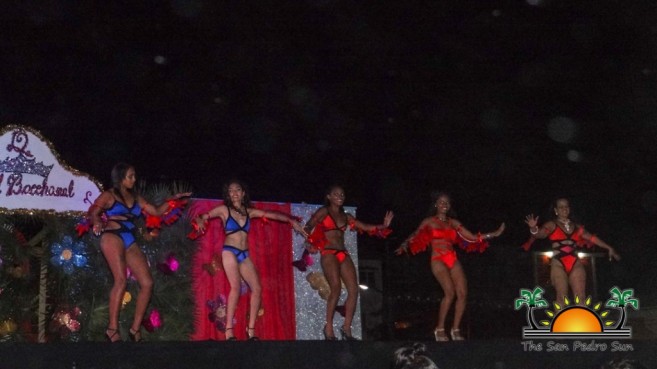 In the first segment, contestants appeared in swim wear. Dancing to carnival music and wear A List Fashion designs, each lovely contestant commanded the stage with confidence and fete spirit. The crowd cheered loudly for their favorite delegate, as they modeled their swim attire. The Jabbawockeez returned on stage to give one more high energy performance, while the ladies prepared for the next segment. 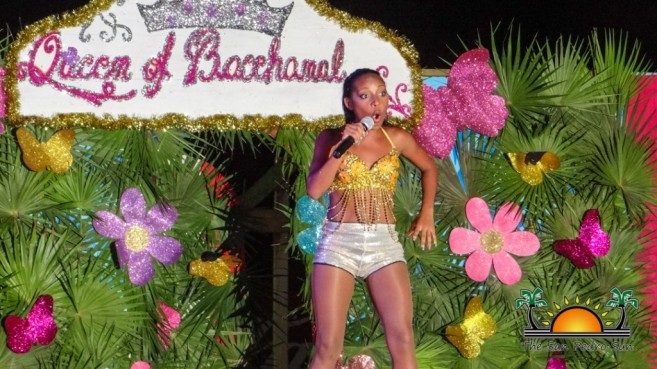 The second segment of the pageant had to be the most entertaining, as each contestant presented their talent. Shantal was up first and her talent was a dance performance to a soca remix. In an homage to the Costa Maya Festival, Doris presented a short skit and dance performance of the weekend that attracts Belizean party lovers. In her talent demonstration, Kristen had the crowd laughing with a short comedy piece and dance. Both Leidy and Adella entertained the crowd with choreographed dance performances that had every one moving along to the beat. 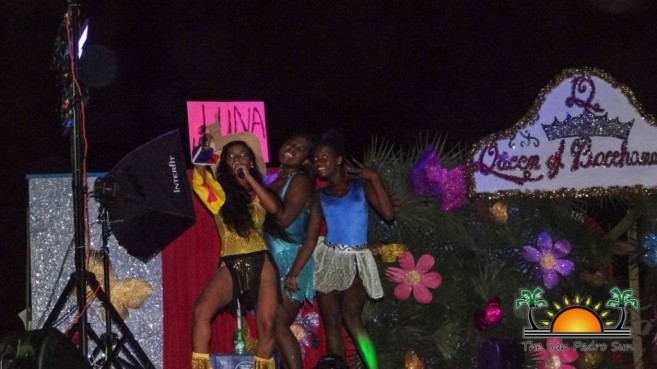 The high energy kept on going as the girls retreated to change into their last outfits of the night as Reina del Carnaval 2015/2016 Silvia Patricia Lopez gave a performance. To the rhythm of the iconic ‘La vida es un carnaval’ by Celia Cruz, Lopez delivered an epic dance routine. 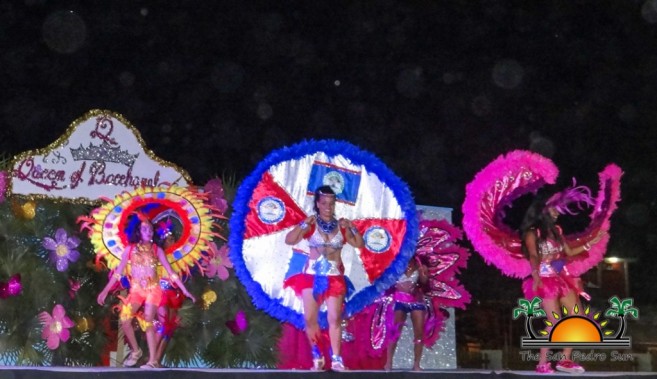 Unlike other pageants, the final segment was reserved not for evening gowns, but rather for carnival costumes. To a loudly cheering crowd, each girl paraded the stage in elaborate and unique costumes that embraced the carnival feeling. The costumes were brightly colored, drawing inspiration from the Belize flag and ancient Maya culture. 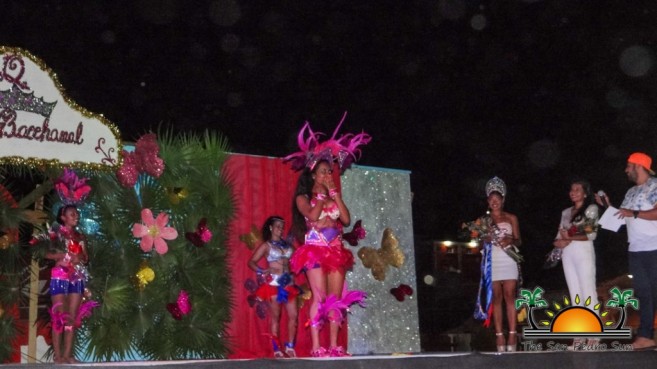 While the judges made their last votes, members of the Mystic Mas Band gave a preview performance of what is to be expected at the Independence Day Parade. The Mystic Mas Band is a new Carnival Group in Ambergris Caye that will be participating in the Independence Day Parade on Monday, September 21st. In fact, the pageant served as both a fundraiser for the carnival group and a means of promoting the group.

Anxiety grew as the judges passed on their decision to the hosts. In second place was Kristen Fuentes, while the title of 2015/2016 Queen of Bacchanal went to Doris Soriano. She was immediately crowned by Miss San Pedro Lions Marisha Thompson amidst cheers and much fanfare. 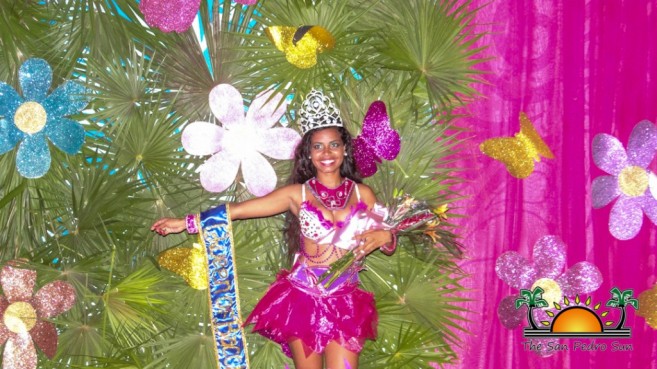 Organizer would like to thank all event sponsors as well as all those who attended the event. Congratulation to Doris on her big win and kudos to all five delegates on a spectacular show!