The recent public outcries concerning the behavior and attitude of some elements of the San Pedro Police Formation toward regular civilians has prompted the Mayor of San Pedro Daniel Guerrero to state his position on the developing issues. The tensions between the general public and the police has been brewing for a couple of days but the hair that broke the camel’s back was the accusations made by three island residents against two police officers who are attached to the San Pedro Police Formation. The three residents are claiming police brutality and alleging that an off duty police corporal placed a gun in the mouth of a male islander on Monday December 17th in plain view of many local residents.

There has also been a very serious accusation made by two American tourists who claim that five officers, including a female police constable, had extorted them of $1,500 while vacationing on the island. A number of local residents are also accusing some elements of the San Pedro Police Formation of causing a ruckus that eventually led to some police officer spraying a canister of pepper spray. That incident occurred on night of Saturday December 15th near the San Pedro Central Park and placed tourists and innocent residents in contact with the strong irritating substance without due warning.

According to Mayor Guerrero, he has been very observant and listening to the concerns voiced by the many residents. He planned a meeting with members of the police department before the end of the week in an attempt to find solutions into the growing concerns. “I am aware of the concerns and I think that what we really need to do is to get together, sit down to discuss the situation and find solutions before calling a public meeting. What I will be doing is to sit with the police and member of the San Pedro Town Council and see how we can address the issues before us,” said Mayor Guerrero. 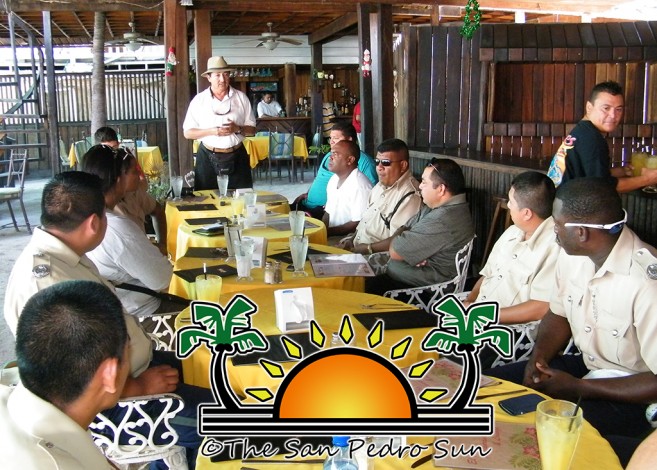 However, Mayor Guerrero wrote on his Facebook account that while he continues to find solutions, he wants residents to exercise extreme calmness to avoid the building of more tensions. “I am listening to the concerns as it relates to the recent developments between certain members of the San Pedro Police Department and local residents and visitors to our island. I am asking our residents to be calm, especially as we move closer into the Christmas season. As a matter of urgency, I will be meeting with the Officer in Charge of the San Pedro Police Assistant Superintendent of Police Vienie Robinson… I hope that after meeting with OIC Robinson, I will be able to convene a meeting with as many members of the San Pedro Police Formation as possible, along with all the Councilors, and together I hope we can discuss the recent developments and chart a new way forward,” wrote the Mayor. Guerrero said that he will do everything within his powers to address the recent issues and will also be meeting with the Area Representative, Manuel Heredia to discuss the problems and find the best possible solutions.

“I want to assure you that I share the concerns being highlighted by many of our residents and agree that we need to address the issue with swiftness. My only plea to my fellow residents is to be calm and let’s move positively in finding solutions. My best wish is for our love ones, family and friends to be safe and enjoy the holiday that is just a few days away,” reiterated Mayor Guerrero.

On Thursday December 20th, Mayor Guerrero met with the most of the police officers attached to the San Pedro Police formation where he voiced his concerns to them about the recent developments. He expressed the sentiment of the public indicating that while he is prepared to work with the Police, they should also do their part in restoring trust and gain the respect of the public.

In response to the Mayor’s remarks, the officer commanding San Pedro Police Station Vienie Robinson explained that while some of the concerns voiced by many island residents are rumors, it is nonetheless reasons for concern within the Police Department. She said however that some of the matters voiced are under investigation. “San Pedro Police is doing the best it can with what we have. Sure we are not perfect but we are doing our best…we have to understand that some people have no respect for the Police and one example is on Saturday where we arrested someone at the Central Park and an entire crowd surrounded the Police vehicle and wanted to take out someone that was placed under arrest and that was the reason we used pepper spray to disburse the crowd. So it is clear that some people don’t respect our officers in uniform,” said Robinson.

In the meantime, SP Police pledged to work hand in hand with the community and mount up more patrol during the Christmas weekend. A public meeting will be called by the San Pedro Town Council where the police will be invited to listen and address the complaints of the public. That meeting will be called in January of 2013.