On the morning of April 25th, an employee of Marco Gonzalez Archaeological Reserve discovered that the toll booth located at the entrance of the site had been broken into. 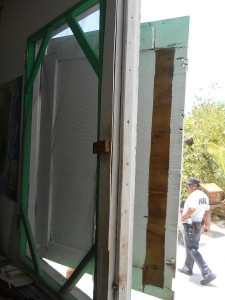 It appears the building had been entered through the door after the latch was broken or through a side window. According to Jan Brown, Director of Marco Gonzalez Archaeological Reserve, no money is ever left at the site, maintenance equipment and some merchandise was missing. The largest item stolen was the newly purchased Echo Gas Leaf Blower. While smaller items such as tools and grounds maintenance equipment were also reported missing. A set of Bushnell Binoculars, a personal item of an employee who had been using them to identify birds on the site was also taken. There were also a few merchandise items missing – t-shirts, beverage coozies and two “Ancient Maya Traders of Ambergris Caye” by Thomas Guderjan books that had just been received to re-sell. As well, the locks on the restrooms were destroyed.

“I feel sick that this has happened,” says Brown, “The items are replaceable for the most part, but I feel that it was a thrill seeker doing this act. The way the place was left, it was as though they were spooked by someone coming down the road. The South Ambergris Caye Neighborhood Watch (SACNW) security guys didn’t notice anything amiss with the building as the window was jammed shut and the door had a small board propping it closed. The robber(s) even left the hammer tool used to pry open the door latch!” 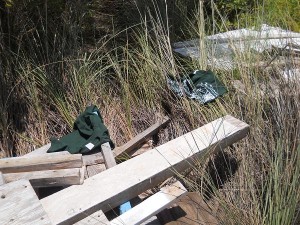 An upset Brown asks for the community’s help in recognizing the items. “Now what I would ask is if any one approaches you to buy a used leaf blower matching the model missing or to purchase the binoculars – which, by the way had been a gift from a friend to our employee, or you see the book lying in someone’s house, please inquire where it came from. I guess, too that, the burglar(s) had a real need to supply their bathroom. Missing were 19 rolls of toilet paper! And, since only the tourists buy our shirts as souvenirs, it’s a shame to say it, but it would even look suspicious if you see any local besides our Marco Gonzalez Archaeological Reserve employee wearing one of the t-shirts, “explained Brown on the situation.

The building has been repaired and put back in order. Brown stated that the SACNW patrol will be watching the south end very carefully in order to prevent any more burglaries to the site. Marco Gonzalez Archaeological Reserve is a member of the Neighborhood Watch and does appreciate their help as well as that of the San Pedro Police Department in investigating the robbery. There is a reward offered for information leading to the arrest of the robber(s). Kindly notify Jan Brown at phone number 662-2725 or call the police with any information regarding this matter. There is a report on file and your name will be kept private.