Inspector Basil Delbert Reyes is the new Deputy of the Belize Police Department’s Coastal Executive Unit, in charge of Ambergris Caye and Caye Caulker. Deputy Reyes, who took over from Assistant Superintendent Dehanne Augustine, comes to the island with 22 years of experience and is looking forward to work along with the community, particularly with the youth on both cayes. 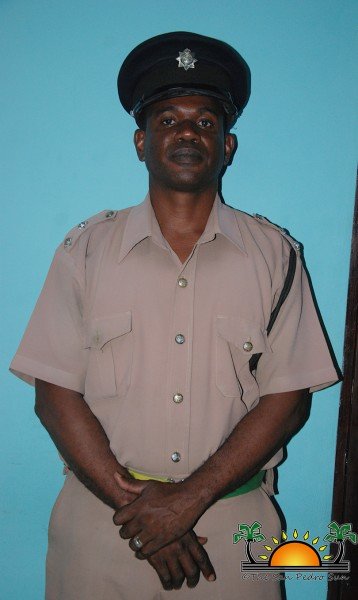 Originally from Belize City, Reyes had previously served in the Coastal Executive Unit in the capacity of sergeant at the San Pedro Police Station between 2009 and 2012. From 2012 until recently, he was posted at Precinct 2 Region 1 south side of Belize City. Reyes believes that by educating the youth and guiding them to the right track with the assistance from parents we can accomplish a healthier and safer community. He stated that policing is not only the job of the police, but of every single person in a society.
According to Reyes, the initial part of his policing career involved training in community relation and domestic violence. Eventually he moved to the anti-drug unit in the cities of Belize and Belmopan for the next 12 years. During this time, Reyes stated that he extensively travelled the country and also assisted policing trainings in South America, the Caribbean, the United States of America and Europe as well. “It makes a better officer, as we are designated protectors of the people to assist and identify those avenues of bad and alert them for their own safety against the presence of this,” said Reyes. “If such bad acts itself out against the people, then we the police will stand as that barrier to restore what has been violated for the individuals.” Deputy Reyes emphasized that his duty is to protect and serve and islanders can feel free to approach him at any time for assistance. He added that he is here to help the Officer in Charge of the Coastal Executive Unit, Superintendent Reymundo Reyes, to maneuver the island’s police department to continue serving the community in an even more efficient manner.
Deputy Reyes believes in making the island a safer place, and the best way to achieve this goal is the mutual work between the community and the police. The San Pedro Sun warmly welcomes Inspector Reyes, and wishes him the best in all of his professional endeavors!