The San Pedro Police Formation is investigating the circulation of counterfeit currency on the island and has detained persons holding fake notes of BZ$100. They are expected to be charged and prosecuted at the San Pedro Magistrate Court for the offence. The word of counterfeit BZ$100 bills first surfaced on the mainland. The bad money has now apparently reached the island, and business owners are advised to be careful and know how to identify the fake currency. According to the Central Bank of Belize, the Belizean monetary bills contain new features that make them harder to counterfeit. Most fraudulent paper currency targets the higher denominations because they represent a greater profit. In previous cases, the denominations affected were the $50 and $100 bills. 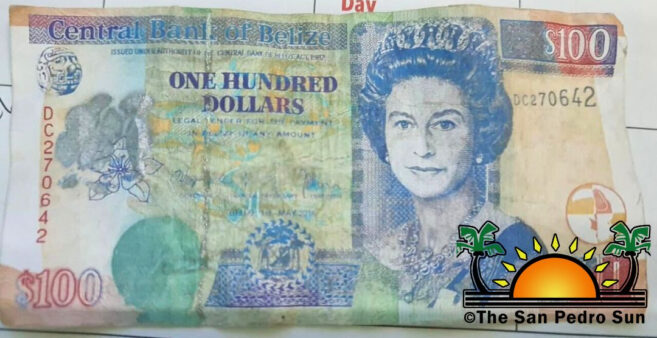 The counterfeit $100 bills recently seized by police all have the same serial number, DC270642. It is unknown at this time if there are more of these $100 fraudulent notes circulating. If someone pays you with one, check the serial number and look for features that identify a genuine bill.
To verify if a BZ$100 note is genuine, look for an intaglio overprint of a periwinkle flower over the toucan hologram on the left center corner of the bill. In the case of the $50 bill, the foil in the shape of an angel fish now has an intaglio overprint of the Kinich Ahau jade head. Another feature to look for is the watermark images. Of importance to note is that the watermark is there from when the paper is made, and it cannot be faked. Furthermore, the $100 and $50 bills feature a watermark of a jaguar, while the $20, $10, $5, and $2 bills feature the image of the ‘Sleeping Giant.’
Regarding the watermark, this also incorporates the bill’s value, spelt out in capital letters in electrotype. Another feature to look for when detecting a counterfeit bill is the type of paper. The paper for the actual currency has a thin metal security thread that is embedded in the paper when it is made. This metal thread has the word ‘BELIZE’ printed on it.
When you come across a suspicious note, quickly inspect it by holding the note up to the light. You will see the real value in the watermark printed on the paper. If you are a victim of counterfeit currency, report it to the nearest police station. In San Pedro Town, visit the police station on Pescador Drive or call them at 206-2022.

Police encourage everyone to be safe during September Celebrations