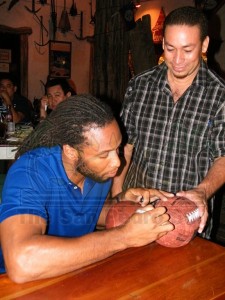 Larry Fitzgerald is a wide receiver who was picked third (overall) by the Arizona Cardinals in the 2004 NFL Draft. He has remained with the Cardinals and is currently the fifth all-time in NFL history in receiving yards per game for a career (76.0 yards per game). He is behind Calvin Johnson, Andre Johnson, Torry Holt, and Marvin Harrison. A little over a year ago, in August of 2011, Fitzgerald Jr agreed to an eight-year, $120 million contract extension.

Roberts, on the other hand is a dynamic and up and coming professional football player also playing for the Arizona Cardinals as a wide receiver and punt returner. He was drafted by the Cardinals in the third round of the 2010 NFL Draft.

The two footballers, having coming off a busy season, took time out from January 14th to 18th to relax in the Central American nation of Belize, enjoying some mainland tours along the green canopy of the outskirts of the city. Off Ambergris Caye, they snorkeled along the Meso-American Barrier Reef near Hol Chan Marine Reserve and enjoyed the rich underworld marine life. They were also seen out and about enjoying the island’s lifestyle and outdoor dining and music. While they were on the island, several football enthusiasts had the opportunity to take a few photographs and autographs!