After narrowly qualifying for the second round of competition in the Fédération Internationale de Football Association (FIFA) World Cup Qualifiers, the Belize Jaguars now face the Dominican Republic. The official dates for the home-away games for the Belize National Football Selection have been announced, and the Jaguars are back at camp preparing for the big match against the Dominican Republic’s National Team. 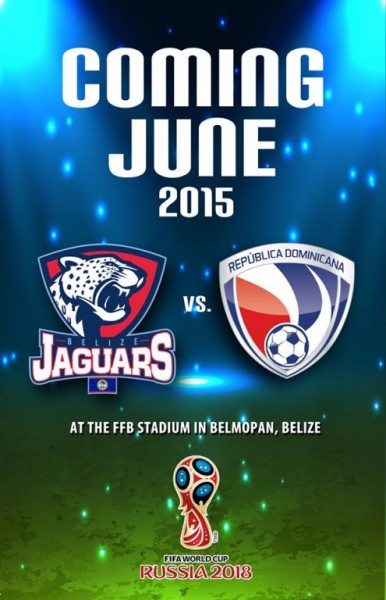 The first game will be an away game for Belize on Thursday, June 11th. The match will be played at 2PM at the Estadio Olimpico Feliz Sanchez in Santo Domingo, Dominican Republic. The Jaguars will then return home for the second match on Sunday, June 14th, kicking off at 4PM at the Football Federation of Belize (FFB) Project Stadium. Tickets for the home match will be made available closer to the game date. FFB will be announcing in the days prior to the games whether they will be aired live on television. Adding excitement to the games is the return of Belize’s top striker, Deon McCaulay. McCaulay was unavailable during the first round, but is expected to contribute greatly to the team in the second round. “The Belize National Team continues its preparation for the FIFA 2018 World Cup Qualifiers. Our Jaguars will be going up against the Dominican Republic in the month of June. We have our players in training every Monday and Tuesday as of April 13, 2015,” said FFB. The Belize Jaguars going into the second round of games are Woodrow West, Tevin Gamboa, Dalton Eiley Jr., Denmark Casey, Andres Makin, Stephen Martinez, Deon McCaulay, Jarett Davis, Kahalil Velasquez, Trevor Lennen, Carlton Thomas, Highking Roberts, Elroy Kuylen Jr., Nahjib Guerra, Ian Gaynair, Amin August, Marlon Meza, Delone Torres, Daniel Jimenez, Jordy Rolando, and International Players Shane Orio, Michael Salazar, Allan La Flore, Brian Hulse and Elroy Smith.
Belize must win in order to advance to the third round of games of the qualifiers for the World Cup Russia 2018. To learn more on the World Cup Qualifiers and to get a full schedule for the games in the second round of game visit www.concacaf.com/category/world-cup-qualifying-men.