The Belize National Football Selection is scheduled to play its first match in the Fédération Internationale de Football Association (FIFA) World Cup Qualifiers on March 25th. The Jaguars will take on the national football selection from the Cayman Islands in hopes of advancing in their quest to earn a spot at the World Cup Russia 2018. The match will take place at the newly renovated Football Federation of Belize (FFB) Project Stadium in Belmopan City at 8PM. 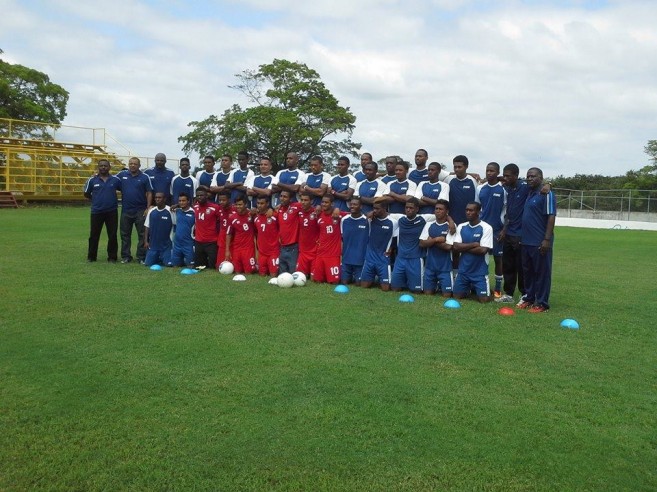 In order to ensure that the field was up to par with international standards, FIFA officials have been carrying out several inspections of the fields before the announcement of the match. On Monday, January 26th, the stadium lights were inspected and approved for use in night matches. The following day, inspections of the field, VIP lounge, changing rooms and media booth took place. The FFB Project Stadium received full approval by FIFA to be used for the World Cup Qualifiers on Thursday, February 26th.
The Belize Selection is made up of Rai West, Woodrow West, Jerome James, Jarrett Davis, Ian Gaynair, Denmark Casey, Norman Anderson, Randy Padilla, Trevor Lennen, Marlon Meza, Jemaine Jones, Najib Guerra, David Trapp, Andres Makin, Amin August, Daniel Jimenez, Khalil Velasquez, Byron Chavez, Elroy Kuylen, Tyrone Pandy, Harrision Roches, Highking Roberts, Tevin Gamboa, Dalton Eiley, Marvin Centeno, Jordi Polanco, Delone Torres, Kyle Flowers, Elroy Smith and Shane Orio. The team has been practicing over the past months. The winner of this match will advance and face off the national football selection of the Dominican Republic in June 2015.


To get full details and the match schedule for the Confederation of North, Central American and Caribbean Association Football Preliminary Competitions for the FIFA World Cup Russia 2018 visit www.concacaf.com/article/concacaf-wcq-draw-determines-initial-pairings.

Cleaning up the island, one campaign at a time!
Wild Recon features Belize on Animal Planet