On Sunday, August 10th CONCACAF inspectors ruled that the pitch at the Football Federation of Belize (FFB) stadium is not suited for international matches. Without a sporting stadium meeting confederation standards to host the matches, Belize’s Belmopan Bandits have been eliminated from the 2014/2015 Champions League Tournament. The Bandits were to play their first home match on Thursday, August 21st against Isidro Metapan, but that game will now be hosted by Costa Rica’s Club Sport Herediano. 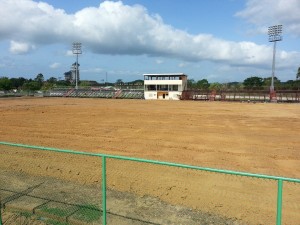 CONCACAF officials stated in a press release that the FFB Stadium’s pitch was not up to par for international play, and as such the Belmopan Bandits did not meet their requirements to participate in the Champions League. “For the second time CONCACAF inspected the playing surface at FFB Stadium on Sunday August 10th, encountering conditions that did not meet Champions League standards as described in the Regulations governing the competition. Articles 2.2.1 f, 3.8 a, 4.2 b, 4.7 a. and section 10.1 of the 2014/15 CONCACAF Champions League Regulations address the obligations of participating teams to have a home venue that complies with CONCACAF standards. Article 10.1 states that all stadium facilities, including fields, must comply with specific standards to be used for international play,” stated CONCACAF officials.
FFB had launched a $1.8 million upgrade, courtesy of FIFA, to ensure the Belmopan Bandits’ participation in the tournament. The FFB Stadium was first inspected on Thursday, June 19th and Friday, June 20th, during the inspection the football pitch was not yet completed but inspectors declared that the stadium had met the minimum required standards allowing the Belmopan Bandits to participate in the tournament. The stadium needed to include proper lighting, seating for 5,000 people, separate shower stalls and locker rooms for participating teams and referees, and a football pitch landscaped with Bermuda grass (a special type of grass required by FIFA standards). CONCACAF officials stated that the stadium had all the other requirements except a properly landscaped pitch.
FFB President Reperto Vicente has stated the decision came due to cosmetic problems, which was out of the federation’s control as it was FIFA who was in charge of the renovation. “CONCACAF came to do the inspections and certainly they were not happy with what they said because there is a lot of brown spots on the pitch. Contractor, Marvin Ottley had a budget of $152,000 US to bring the pitch up to international standards. Let me inform you that the FFB never signed a contract. FIFA signed the contract, and the FFB was only the recipient of a product that should have been delivered. So the contractor and FIFA signed the contract, (it) is between those two entities,” said Vicente.
While Vicente claims that the outcome of the pitch was not FFB’s fault, Minister of State in charge of Sports, Honorable Herman Longsworth solely blames FBB. “I am extremely concerned and very disappointed. We were all told that the field would be ready. FFB told us that they would have had this field ready. The onus was on them to complete it. I have no idea why it was not completed, they kept saying it would be complete,” said Minister Longsworth. Owner of the Belmopan Bandits, Minister John Saldivar responded by placing the blame on FFB. “It is with a heavy heart and deep sadness as the owner of the Belmopan Bandits FC that I must accept the decision of CONCACAF to remove my club from the Champions League Tournament due to an inadequate FFB Stadium. I believe that my club, its players, and I will be justified in our indignation towards the FFB and its officials who are responsible for this sad state of affairs. However, the blame game will only cause more disappointments as we prepare to defend our national pride in the Nations’ Cup in three weeks. I will therefore hold my fury and instead offer to assist in whatever way I can in our preparations for the Nations’ Cup,” said Minister Saldivar through a social media statement. 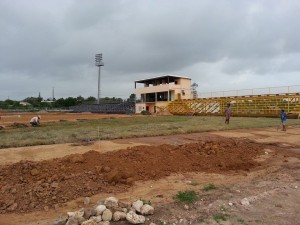 Vicente has written to CONCACAF requesting an amendment, but with the tournament already into its second week, the decision may be final. “This decision, in my strongest opinion, should not have been made at this late stage. FFB assures the nation that it has not given up the fight to have the Belmopan Bandits participate in the Champions League. We believe that Belmopan Bandits has earned the right to participate in this tournament,” said Vicente.
Due to the controversy that the incident has caused, FIFA will now be taking over the restructure and management of FFB for the next two years. The removal of the Belmopan Bandits from the Champions League due to improperly landscaped pitch has led to the operations of FFB to be under scrutiny, and as such, FIFA is getting involved in both the finances and administration of the federation. Major League Soccer reported on the FIFA press release that stated: “The failure to bring the pitch itself up to standard is seen here as a huge disappointment in a country which has no alternative venue that could be used.” According to Vicente, FIFA has already contracted a local company to assist the federation to put its finances in order. “FIFA is in the process of evaluating everything that we are doing. FIFA is coming in October and FIFA is going to hold a workshop with all the stakeholders, especially the owners of the teams in the league, and FIFA is going to restructure the league and they will manage the league for the next two years.”
Vicente believes that under FIFA’s guidance, FFB will prove to be more productive and efficient in the coming year.