For the second year in a row, the San Pedro Tiger Sharks have claimed the National Elite Basketball League (NEBL) championship. The Tiger Sharks defeated the Cayo Western Ballaz in flawless best-out-of-three finals. In its two -year history of the NEBL, this is the biggest rivalry in the league; a clasico if you will!

The finals tipped off at the Sacred Heart College Auditorium on Friday, June 5th, when the home team, Cayo Western Ballaz, tried to make a change in the records from their loss in last year’s tournament. Meanwhile, the San Pedro Tiger Sharks had one thing in mind, to be the first back-to-back champions of the league. The visiting team had the control of the game from the onset with an early lead of 10-5. However, these leads changed and by halftime the Western Ballaz were up 35-28. The San Pedro Tiger Sharks turned the tables in the fourth quarter taking the lead with a score of 55-53 following a man-to-man defense strategy. The home team could not keep up with the visiting squad and at the end of the game, it was the Tiger Sharks who swum out victorious with a score of 77-64, taking Game One in the finals.

Game Two took place in San Pedro Town on Sunday, June 7th. Cayo Western Ballaz was eager to make a difference with the hopes for an upset so that there could be a third and final game, sending the series back out West. This was the game of the games for the Tiger Sharks, as the 2015 NEBL championship was within biting distance. The fan turnout was massive, and its energy and cheering was tangible both on the bleachers and on the court.

The home team jumped to an early 18-7 lead by the end of the first quarter, then extended the lead to finish the second quarter 43-41. However, in the middle of the fourth quarter the Western Ballaz were able to take a 50-47 lead. It was deafening inside the auditorium, especially when, with 54 seconds of game time remaining, the Tiger Sharks tied the game up at 55 apiece. The tension was visible on both teams, as they battled through the remaining time. 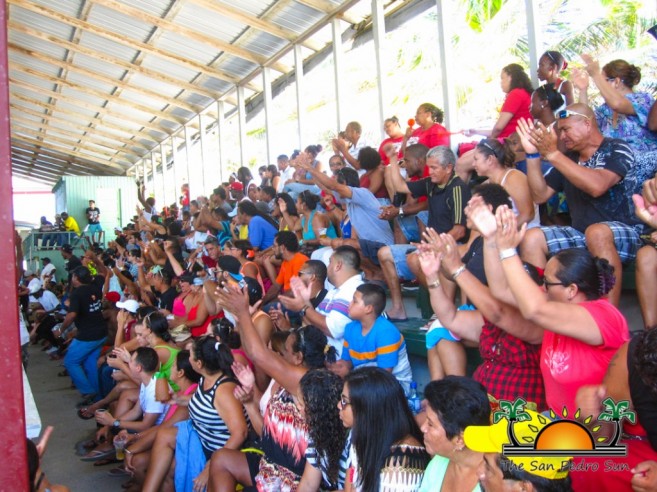 The crowd shouted and supported their respective teams unceasingly. The Tiger Sharks rallied and took the lead once more, and with a 6-0 run, sealed the game and championship home with a 61-55 final score. The crowd poured onto the court congratulating the back-to-back champions, the San Pedro Tiger Sharks.

Once again, James “The Hammer” Milton led the Tiger Sharks with his monstrous double –double, with a game high of 22 points and 16 rebounds. Next was Darwin “Puppy” Leslie who tallied 18 points, 6 rebounds, four assists, and three steals, while Raul “Thumpy” Roches finished with six points and six rebounds. As for Western Ballaz, their top scorer was Richard Troyer, who also did a double-double, netting 21 points and grabbing 11 rebounds. Ivan Flowers finished the game with 10 points, three rebounds, and three assists, and Kurt “Chengo” Burgess, scored nine points, eight rebounds, two assists and three steals.

The San Pedro Tiger Sharks swept the 3-game series by winning the first two games and becoming the NEBL champions for this year’s season. They remained with a perfect record at home with 19-0, and are back-to-back champions. The MVP honors went to Darwin “Puppy” Leslie, who averaged 22.5 points/game, 4.5 rebound, and 3 steals per game.

The NEBL would like to thank all teams that participated in this year’s tournament and further extends its gratitude to Belize Bank Ltd for the $20,000 first place prize and their corporate sponsors, Bowen & Bowen and Smart. Also, special thanks to all the fans that came out to support their home teams, the players, coaches, managers, security personnel, referees, and the table officials. Lastly, The San Pedro Sun would like to congratulate the Tiger Sharks for their second consecutive championship! Kudos to our home boys for a job well done!

Season three is scheduled to begin on January 15th, 2016. Teams and interested parties can start preparing to compete for the coveted NEBL Championship 2016.