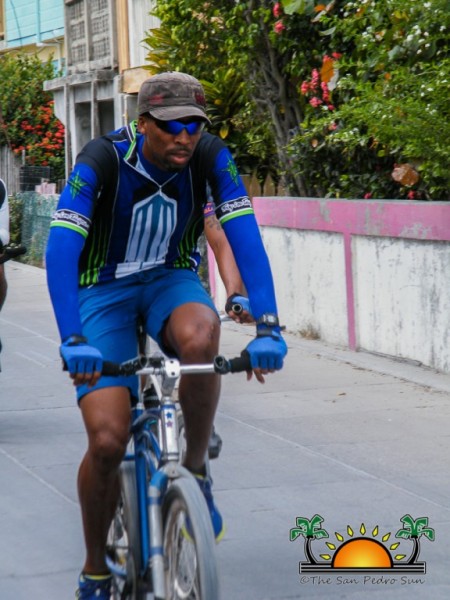 The race began around 3:30PM, and consisted of 20 laps around town that tested determination, endurance, and strength. The race saw the country’s top cyclists participating: Joel Boland, Tarique Cano, and Giovanni Lovell, while Gabourel, Charles Garay, and Arden Garay represented Ambergris Caye. The 36 mile race took two hours and 22 minutes to complete.
Devine Velasquez of Punta Gorda came in second, and Giovanni Lovell of Belize took third place. Apart from claiming a big trophy and bragging rights, Gabourel won the grand prize of $1,300.
This is Gabourel’s fourth successful year competing in this competition. “I won in 2013, 2015, and this year, 2016. I placed 2nd in 2014. All of the wins were great, but this win was more of a statement for me because some of the guys were texting me before the race, and telling that they will make sure I didn’t win. The big name cyclists also thought this was going to be a walk in the park for them, and I proved them wrong. So I must say that this is my best win. Of course, it was all in good fun, and serves as an extra motivation for all cyclists to challenge themselves,” said Gabourel.
Gabourel also recalled how his cycling career started, and how his determination led him to where he is now. “I rode my first ever beach cruiser bike race on the island four years ago. I won and from since then, it has been non-stop. This is where my journey began in my cycling career. It’s been very short, but sweet. I thank the Lord for the little success I have, and for blessing me with physical abilities that carry me on in my day to day life. I am thankful for family and friends that are always there with great words of encouragement and financially supporting me,” said Gabourel.
Gabourel would like to give a big thank you to the SPTC, Minister of Tourism and Civil Aviation and Area Representative of Belize Rural South, Manuel Heredia Jr, San Pedro Sports Committee, Neri’s Tacos, and to his mother, father, and wife for their support.