With their loss to Freedom Fighters on Sunday, April 7th, the San Pedro Pirates Football Club road in the closing season of the Premiere League of Belize (PLB) has come to an end. However, founder of the San Pedro Pirates F.C, Emeliano Rivero is alleging bias and unfair practices by the Football Federation of Belize (FFB) and the PLB against his football club.
In an interview with The San Pedro Sun stated that during the PLB season, every time the Pirates hosted a team at home, the FFB required a total of $1,000 dollars to be given towards transportation expenses for the visiting team. However, he alleges that FFB didn’t make the same stipulations in return from other teams when the Pirates had to travel. “I have never received any financial assistance from them at all,” said Rivero. 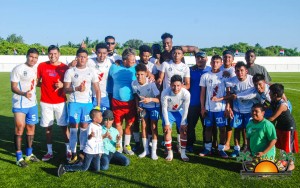 Rivero further states that each team is entitled to bring in five foreigner players, with the stipulation that a special training is completed before the teams can be eligible to trade and import players. He alleges that the FFB has not provided him with that training, and as such, he cannot trade or hire foreign players for his team. “I have been asking the FFB for the and up to now I have not received a response,” said Rivero.” That’s why I decided to make public all the issues that the club is going through to our fans because I’m tired.” A frustrated Rivero feels the actions taken by the FFB against Pirates Inri Gonzaga on Sunday, March 18th, was extremely unfair and shows bias against his club. 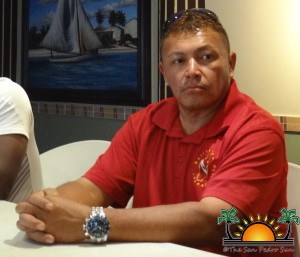 Gonzaga received a 14-month sanction, something he feels is an unfair punishment, especially since there are other players who exhibit worse actions on the field yet receive minimal penalties for their behavior. “The majority of other players received three-week sanctions for misbehaving, not 14 months like what they penalized Gonzaga. With this 14-month sanction, he will not be able to play for approximately two seasons of the PLB,” said Rivero.
In an effort to clarify these accusations, The San Pedro Sun contacted the General Secretary of the FFB, Wilhelm Miguel, who simply stated that “This will be forwarded to the PLB Executive and the FFB for their instruction as to how this matter will be dealt with.”
Mowing forward in the for the next season of the PLB, Rivero indicated that he will be hiring someone that is more knowledgeable about the FFB and PLB policies, who will be attending all meetings and representing his football club. He also stated that disciplinary measures policies will be discussed when renewing player’s contracts. Sanctions and penalties for misbehaving on the field will be also be addressed within the club. The new season of the PLB is expected to start on August 2018.