A collision involving a Belize Telemedia Limited (BTL) vehicle and a motorcycle has left a young lady badly injured. The incident took place shortly after lunch on Monday, July 31st at an intersection on the island’s northern road. The victim has been identified as a Minelly Sanchez, and she suffered a broken leg and a bruised arm. She was transported to the Dr. Otto Rodriguez San Pedro Polyclinic II where she was stabilized, and later flown to Belize City for further medical treatment. The San Pedro Police Formation and the San Pedro Transport Department (SPTD) have since launched an investigation into the accident. 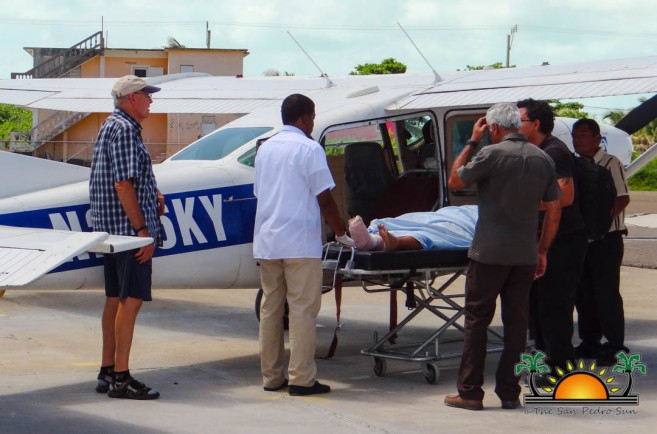 The investigation is young, and there is yet an official report, but the SPTD were still able to share a few details about the accident. Police told The Sun that Sanchez was on her way to work on her motorbike along the northern road. Upon arriving at an intersection, a white vehicle suddenly swerved onto the main road, giving Sanchez little room to avoid crashing with the vehicle. Her motorbike slammed into the front part of the white BTL truck, and the force threw her over to land hard on the pavement. As a result, she broke her right leg and severely bruised her right arm as well. Minutes later, a patrol transported her to the polyclinic.

According to the SPTD, there is a stop sign before entering the main road and it seems that the vehicle may have ignored the sign. However, it is also argued that the large billboards and signage flanking the stop sign may be an issue, as they obstruct a driver’s view. The SPTD has pledged to look into this matter in order to avoid any future incidents.
The San Pedro Sun will continue following this developing story.