Well-known island basketballer Raoul Roches, also known as ‘Thumpy,’ is slowly recovering at the Karl Heusner Memorial Hospital (KHMH) after almost losing his life in a traffic accident on Friday, November 9th. Roches, who plays with the San Pedro’s Tiger Sharks basketball team, suffered massive head and body injuries when he lost control of his motorcycle and crashed into a cement wall in Santa Elena Town in the Cayo District. 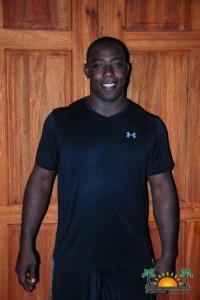 According to reports, Roches was driving his motorcycle from San Ignacio Town to Santa Elena Town, and after crossing the Hawkesworth Bridge, he slammed into the wall of Boiton Barbeque. The crash caused Roches to fall off his bike and onto the pavement, resulting in him suffering severe injuries. The athlete was rushed to the San Ignacio Community Hospital, where he was treated and then transported to the KHMH for intensive care.
Roches remained in a coma for a couple days, but on Wednesday, November 14th, Tiger Shark’s coach Rico Black told The San Pedro Sun that he had woken up and started breathing on his own.
Black is glad that Roches is on the road to recovery and will closely follow his progress. “We just want to keep a positive spirit,” he said.
Roches’ has contributed immensely to the island’s basketball, even winning the National Elite Basketball League championship in 2015 as a Tiger Shark. Thumpy was quite instrumental in the team’s victory that year and was recognized with an individual award for his contribution to the Tiger Sharks.
The San Pedro Sun wishes Roches a speedy recovery.