« Older: Letter to the Editor: Lifesaving Lessons with Butane
Newer: » Fire in Boca del Rio believed to be electrical


A female tourist was attacked by an estimated 10 to 12-foot crocodile while swimming in the sea on Monday, August 12th after 9PM. The victim was staying at a resort south of San Pedro Town and was seriously injured on her left arm during the ordeal. She was assisted by a team of rescuers – a combination of members of the South Ambergris Caye Neighborhood Watch and Rickilee Response and Rescue – then transported to the Dr. Otto Rodriguez San Pedro Polyclinic, where she received over 100 stitches. She has since left the country, while the American Crocodile Education Sanctuary (ACES) is trying to locate the animal under the authorization of the Forestry Department. 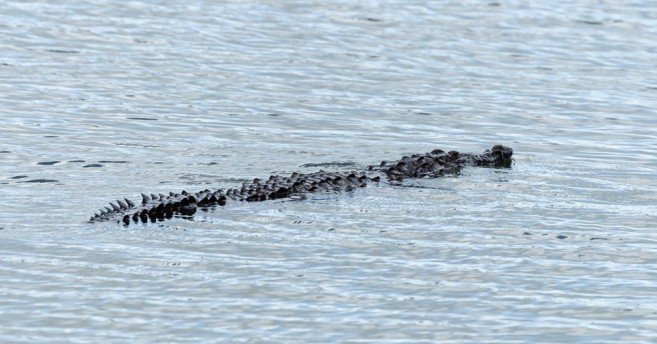 A formal report has not been issued, but San Pedro Police confirmed the incident saying that it took place in the sea and that the injuries were not life-threatening. Unofficial reports are that the victim was swimming, apparently looking for a piece of jewelry in the water. Unexpectedly, she was attacked by the crocodile, which caused severe injuries to her left arm.

The San Pedro Sun reached to Chris Summers at ACES, who told us that is not unusual for a crocodile to be in the sea, particularly in the northern or southern parts of the island. “The attack is unusual though, that’s not normal behavior for these species, they are generally very shy,” said Summers. He stated that after the tourist was assisted, they spotted the crocodile on the sea, but did not manage to capture it. When captured, the animal would ideally be placed in captivity.

Summers added that they are planning to start working with resorts on the island and get signs erected advising guests against swimming in the sea at night. This will be emphasized on the properties located on the northern and southern areas of Ambergris Caye, where it is more likely that these reptiles might cross from the lagoon to the sea.

Organizations that assisted in this emergency:


ACES is a non-profit organization, permitted by the Belize Forest Department, dedicated to conserving Belize’ critical wetland habitats and protected species, specifically crocodilians, through scientific research and education in order to preserve Belize’s wildlife for future generations. For help dealing with problematic crocodiles or other wildlife issues/emergencies, contact ACES via phone at 623-7920 or email [email protected]

Triple R is a non-profit, quick response team that assists both island residents and visitors alike in emergencies. The group was formed in memory of American National Rickilee Mercer, who perished on the leeward coast of Ambergris Caye in March 2017. Triple R utilizes 15 plus volunteers and staff, and is always looking for volunteers, donations, and help in growing within the community. Follow them on Facebook and Instagram, or visit their website at www.rrr.life. For any emergencies, Triple R can be reached any time by calling 627-1117.