To commemorate Earth Day, American Crocodile Education Sanctuary (ACES) organized a lagoon clean-up activity in San Pedro Town on Monday, April 22nd. The clean-up started around 9AM outside the San Pedrito canal on the mangroves side, opposite from Captain Iguanas. Garbage collected included a lot of glass and plastic bottles, old sofa’s, a rusted fridge, plastic bags, hangers, shoes, lots of household garbage. 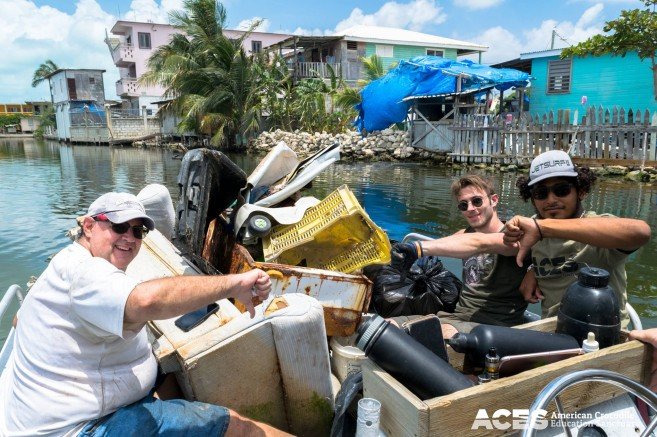 Chris Summers of ACES told The San Pedro Sun they decided to focus their attention on the underappreciated part of the island, the mangroves on the lagoon side. “With climate change threatening ecosystems worldwide, it is now more important than ever to preserve these trees that play so many critical roles in maintaining the health of the lagoon and ecosystem. We didn’t make it far as we were hoping, only about 50 feet, because there was so much garbage stuck inside the mangroves,” he said.
The clean-up saw a small but effective group, which included Christina Manzi from ACES, ACES volunteer Thomas Ack, island resident Chris Monaco, an ACES intern from Italy, Tommaso Sala and Summers. “We were particularly happy that some kids from the neighborhood were wondering around and came to see what we were doing and helped out. They expressed a sincere interest in participating in another clean up so we’ll be visiting their school (San Pedro Roman Catholic School) to see if we can start a small program cleaning up and recycling garbage,” he said. 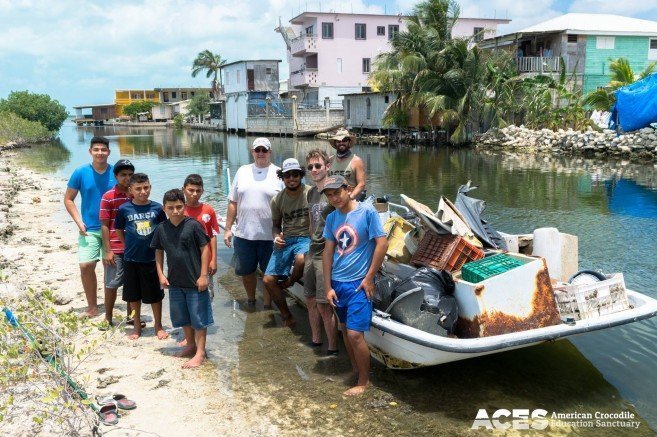 Earth Day is an annual event celebrated on April 22. Worldwide, various events are held to demonstrate support for environmental protection and preservation. First celebrated in 1970, Earth Day now includes events in more than 193 countries, which are coordinated globally by the Earth Day Network. Today, Earth Day is a global event each year, and it’s believed that more than 1 billion people in 192 countries now take part in what is the largest civic-focused day of action in the world.
It is a day of political action and civic participation. People march, sign petitions, meet with their elected officials, plant trees, clean up their towns and roads. Corporations and governments use it to make pledges and announce sustainability measures. Faith leaders, including Pope Francis, connect Earth Day with protecting God’s greatest creations, humans, biodiversity and the planet that we all live on. 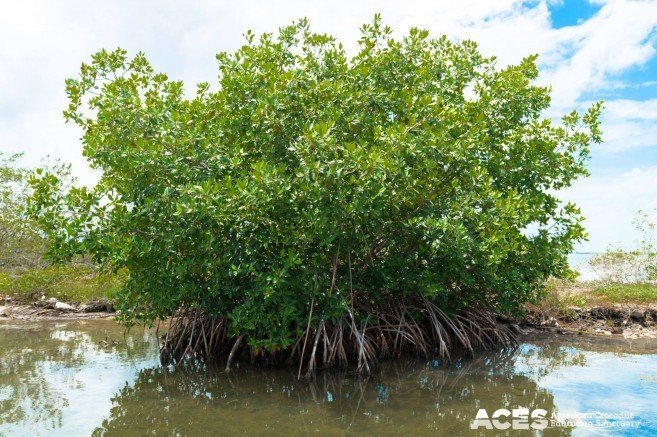 Earth Day Network, the organization that leads Earth Day worldwide, chose the theme for 2019 as ‘End Plastic Pollution,’ including creating support for a global effort to eliminate primarily single-use plastics along with global regulation for the disposal of plastics. EDN is educating millions of people about the health and other risks associated with the use and disposal of plastics, including pollution of our oceans, water, and wildlife, and about the growing body of evidence that plastic waste is creating serious global problems. From poisoning and injuring marine life, to the ubiquitous presence of plastics in our food, to disrupting human hormones and causing major life-threatening diseases and early puberty, the exponential growth of plastics is threatening our planet’s survival.
ACES thanks everyone who participated in the lagoon clean-up activity. Special thanks go out to Hol Chan Marine Reserve for donating the gas for the boat for the clean-up. Island residents are invited to be part of the next big clean-up activity to be held on May, Saturday 11th as part of Hol Chan Marine Reserve Reef Fest 2019 activities.