« Older: Belize to lead regional plastic litter clean up
Newer: » 2019 Kids in Action continue to learn about the environment and ecosystems of Ambergris Caye


On August 20th, two members of American Crocodile Education Sanctuary’s (ACES) team witnessed a man feed a wild American crocodile frozen chicken in a sealed plastic bag. The croc disappeared beneath the surface with the indigestible “treat” before anyone could stop it. 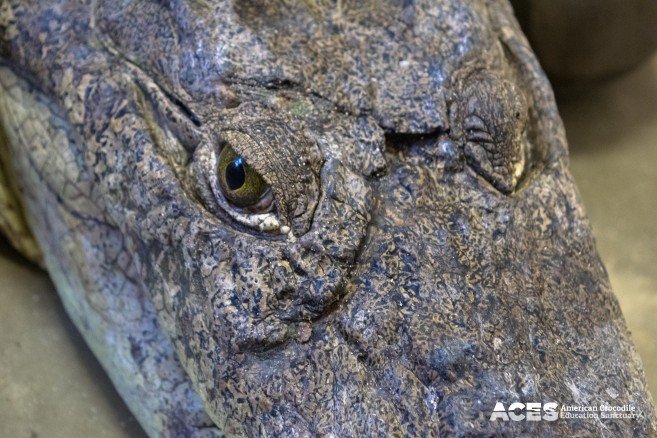 As the team watched in sorrow, the man tried to calm them, claiming the bag was ‘biodegradable’ and ‘not harmful to the animal.’ What this man does not know is that biodegradable items must have an ideal environment to begin the degradation process, one that includes UV light and oxygen, both of which are not found in a crocodile’s stomach. Even if these conditions are met, the process can take up to six months before breakdown occurs. Never-the-less, one should never feed a wild animal – especially not something encased in any sort of bag. 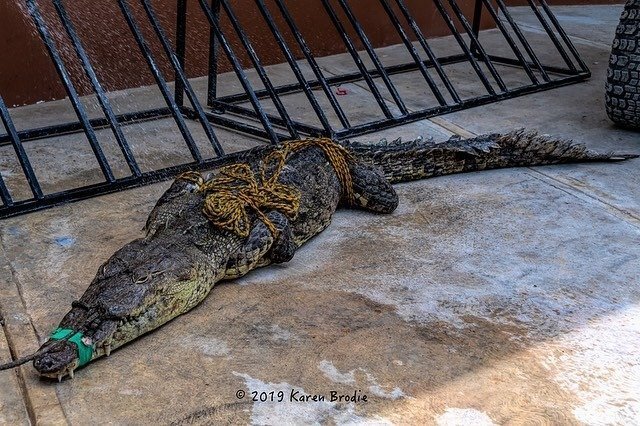 Alarmed by the information that this “treat” has been given to this croc on a regular basis, our team and volunteers set out over the course of the next week in the mornings and evenings in an attempt to capture the croc and flush her stomach to expel the accumulated trash before any blockages became life-threatening. 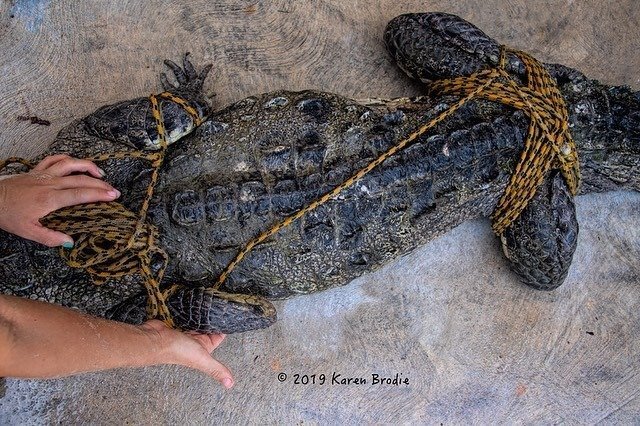 Unfortunately, due to the irresponsible actions of another individual nearby, who has also been feeding the crocs and habituating them to people, our task was easier said than done. During one evening’s investigation, we had six adult crocodiles coming to us seeking out food before we identified a croc who was in serious trouble with her health. Even in the dark of night, with flashlights barely piercing the murky water, we were able to see for the briefest of moments how dangerously underweight this animal was, and she became our sole target for the evening. 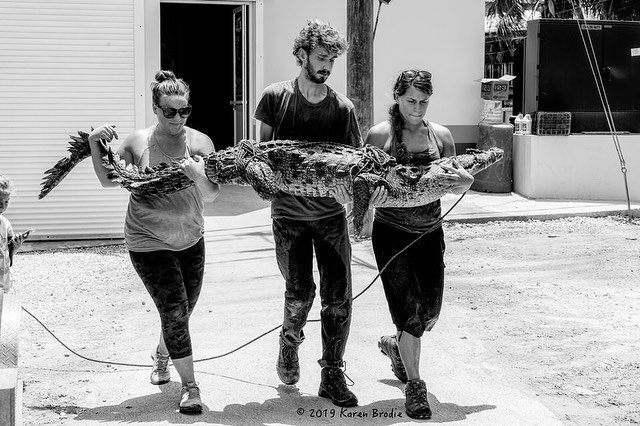 Over the next 4.5 hours, we tried everything we could to capture her, whilst at the same time making sure we didn’t catch or become caught ourselves by any of the other crocs who were increasingly interested in our presence and bait. After several near misses and hours of frustration, shortly before 1AM the team finally got a rope around our target crocodile and brought her onto the shore.
What we saw stopped us all in our tracks. It’s been a long time since I’ve seen a croc looking that bad, but for the two remaining members of the team it was their first time, and it brought tears to their eyes. To say she was underweight is a drastic understatement. This helpless animal was skin and bones. At nine feet long, she could not have weighed more than 100lbs, approximately half of what her weight should be, and she displayed external body conditions, indicating very poor health. 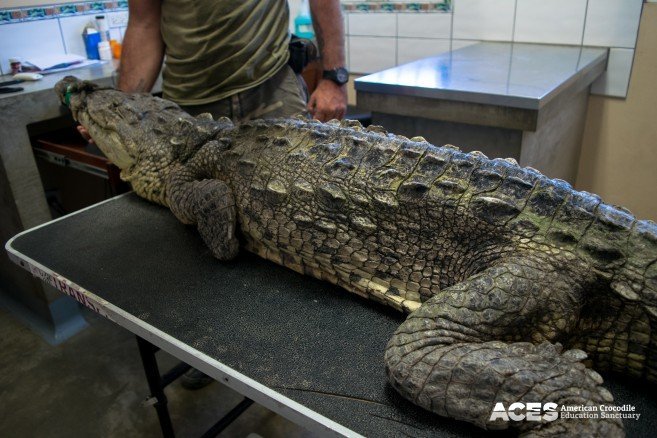 As well as her obviously dangerous weight, poor Elda, as she’s now become known, had peeling skin all over her body; not just a little, she had a lot of skin coming off. Since crocs don’t shed their skin like other reptiles, this is usually an indication that the animal has spent a considerable amount of time in polluted and toxic waters. She had vision in only one eye, and the pupil in that eye had little constriction in response to light. This is a bad sign, as every time we’ve observed this lack of pupil response, the croc has died within three days. 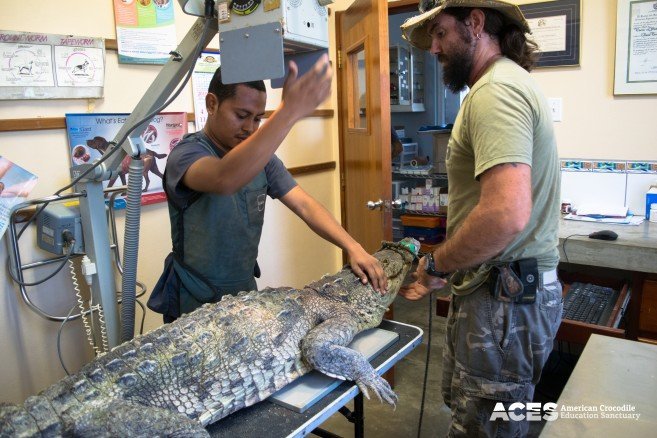 Her body also had bite marks all over it, some old, some new, and was missing her front foot. That being said, we weren’t surprised to find wounds such as this, as fighting is to be expected when you have large amounts of wild predators in one area who aren’t naturally a very social species. We typically only see this species hanging out in high concentration due to their behavior being altered by people feeding them. Unless you witness them fighting, they seem to be living harmoniously, but captures of such animals and inspections of their bodies, show this to not be the case – as was demonstrated by Elda’s body condition. Though Elda’s health looked to be in an extraordinarily fragile and declining state, her ability to somewhat fight the capture and interest in food gave us hope that she may be able to pull through if she immediately received the proper care. 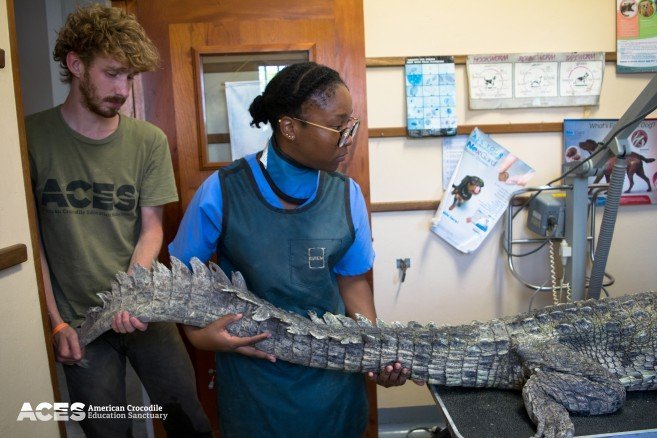 So began her journey. It was clear that Elda was in need of medical attention and daily monitoring if she was to have any chance of surviving. With there being no vet on the island, and all of ACES rehab ponds at capacity, we began immediately making arrangements to get her to a vet on the mainland, and then on to Crocodile Research Coalition’s (CRC) facility for post-veterinary monitoring.
The following morning Elda was loaded onto a boat and headed for the mainland. The first stop was the Animal Medical Centre, where she was x-rayed, and the worst of her wounds thoroughly cleaned. She was then taken to the Belize Zoo to spend the night in a holding area where she could be free of ropes and could de-stress, as her holding pen at CRC was not ready till the following day. The following morning, members of the CRC team arrived to take her to a rehabilitation habitat, where she could be monitored on a daily basis and allowed to recover in a low-stress environment. 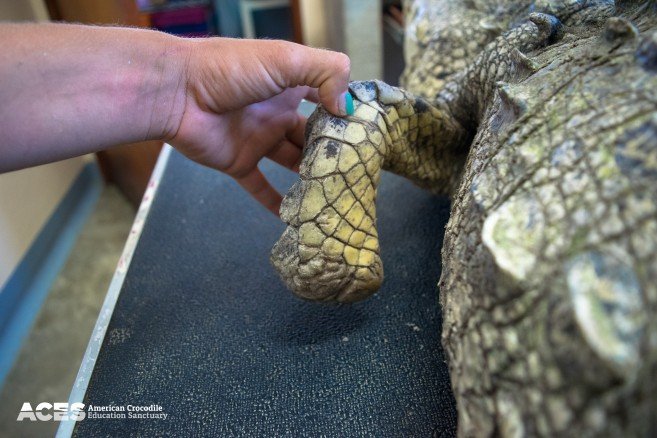