Home » Arts & Culture » Looking back at Carnaval, through the eyes of Mrs. Tomasita Gomez

« Older: Isla Bonita All Stars gearing up for Band Fest 2013
Newer: » Carnaval 2013 ends with the burning of Don Juan Carnaval

Looking back at Carnaval, through the eyes of Mrs. Tomasita Gomez 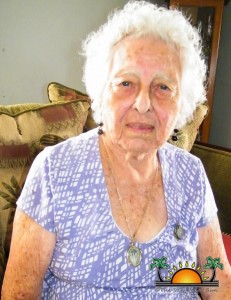 “Carnaval is not really carnaval without the painting,” said the 84 year old Tomasita Reymunda Guerrero de Gomez on a warm Monday, January 4th afternoon as she sat on her couch in her living room. Señora Tomasita was reminiscing on her childhood and teenage days in the fishing community, back when the island had not more than 500 residents altogether. “There were only two roads and the beach front. The fishing community was from the primary school to near the community cemetery. Our yards were larger and our homes, mostly huts, were far apart and the use of firewood was common and its smoke formed a thick blackness on the pots,” said Mrs. Tomasita, as she explained that with the influx of people to the island, the fishing community slowly began changing, growing, developing and so did the traditions of the island.

With a very clear and accurate memory of various events on the island, Mrs. Tomasita recalled the days that the island would host celebrations unique to the island; those that were a part of the settlement since the days of her great grandparents. One such event was the island’s carnaval celebration – one that Mrs. Tomasita said the island looked forward since it brought “alegria en el corazon” (joy to heart) of the children, adolescent and even the grown adults. “It was a festivity of painting that children and adults looked forward to. The parents would give their kids powder to go and paint and they would say to us ‘here go paint dad, go paint your brothers’ and it’s something that became a part of us. We all used to paint each other,” said a very cheerful Tomasita as she flashed back with a smile. She remembered the instances when, as teenagers, they would run through the outdoors kitchen huts to paint their peers. 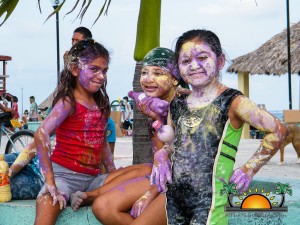 For many islanders in the much laid back San Pedro, carnaval took weeks of preparation and in some instances the festivities started the weekend following the “Dia de los Reyes” (January 6th). “People already knew that carnaval time was coming and they started getting prepared. You start getting your baby powder, flour and at that time the housewives used “añil” (a blue detergent/soap used to wash/rinse white clothing) and “almagre” (a red iron ore used in dyeing and marking) that they wet and gave a colorful paint-like substance. They also used the “tizne” (black smut off cooking pots caused by accumulated smoke) – at the time everyone used firewood to cook and so they would go looking for the black-pots and scrape off the smut that they eventually wet and used as paint. It was crazy, but fun painting,” said Mrs. Tomasita. Mrs. Thomasita could also recall her mother warning them to stay home if they did not wish to get painted. “My mother would always say to stay home if I didn’t want to get paint. If one of us were on the street when the painting was happening, she would always say ‘don’t fight back’ and to allow ourselves to be paint and come home and bathe. We all grew up knowing that – that was the way it was from ever since my grandfather was young. What I used to do is to go early and paint with my brothers and our cousins and then return home and go dance in the comparsas,” said Mrs. Tomasita, who grew up with a family of 11, something that was not uncommon in the village. “One thing we were told is that kids should paint kids, teenagers with teenager and adults with adults – we painted each other, but respected each age group. Respect was very important because painting was never something that was meant to be disrespectful,” stressed Mrs. Tomasita who explained that during her childhood, discipline was paramount in her community. The rule our parents stressed was “paint your contemporaries, but always respect your adults.” 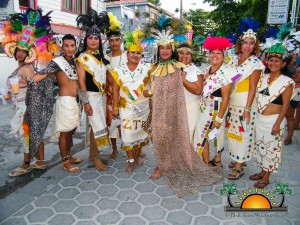 Mrs. Tomasita recalls her early days of carnaval which included the comparsas as her family was very much involved in keeping the tradition alive by organizing the comparsas songs and dances. “My father had a coffer filled with carnaval material – material going way back into the days of his grandfather. My dad Abertanu and my uncle David Guerrero use to get together to ensure that the tradition was kept. When my dad and uncle died, my cousin Severo – David Guerrero son, he took it over and also ensured that the tradition was passed on to the next generation. When I was not in my comparas costume, I would be painting and having fun,” she recalled. She remembers the many comparsas groups and even the notes to some songs that she once danced to. “Because some of the families were large, it would not take much to organize a group. I recall one of the families, the Muñoz, it was almost only girls and they would get about three more friends and that was a complete group. We did our own songs, we wrote the words and we practiced them,” indicated Mrs. Tomasita who said that on each of the three days, the types of comparsas were different. Folk dances types such as “Estudiantina, la punta del talon, cubanitas” were danced on the first day, while on the other days they would dance “Chinitas, Rancheritas” and even “Cubanitas” at times. “Our costumes were not vulgar. They were elaborate, colorful, beautiful and elegant, even though they were made from basic things we had around us. The dances were very well choreographed and festive.” Mrs. Tomasita even browsed her albums while we visited, and she pointed at pictures showing her children in beautiful costumes. They too were brought up in the island tradition. 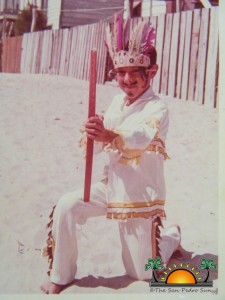 But with the significant changes that came with the growth of the island as it became a tourism destination, so came the changes in the way the tradition once was. “The changes came in the early 1980’s – like around the time when the church was being built. People first came around that time to assist in the construction of the church and they stayed, evolving the island from a fishing village to a tourism community. That brought people that were unaware of the tradition and because of that, a new form of the tradition found root that eventually merged into what it is now – the use of actual paint.”

Mrs. Tomasita recalled that their parents would begin accumulating the egg shells and filled them with “añil,” perfumes and even “Florida water” (a cologne known for its refreshing and tonic nature as well as its scent and is known to be used as a skin toner/ body splash) and then sealed them. The eggs would then be used during carnaval and burst on each other but it was never hurled at others. “The comparsas without painting is like a normal street dance. Both the comparsas and painting complement each other and that is what makes it colorful, entertaining and brings the carnaval spirit alive with much laughter and joy,” she said. 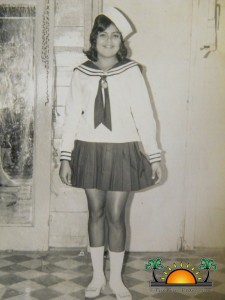 Carnaval usually began with the “enmascarados” or masquerades that started about mid-January. The masqueraders would go dancing from house to house entertaining the villagers and sometimes even scaring some people. “That is something that died from the tradition, but it was a part of it,” lamented Mrs. Tomasita. “We also had a masquerade ball with elegant costumes. At the end of the night we would pick winners based on their outfit. Back then we also had a group of people going from street corner to street corner dancing, and one of the persons would come out and announce what will take place in the days leading to carnaval – that was also a festive part of carnaval. Then on Ash Wednesday we would take Juan Carnaval through the village streets, take him to where the park is now and have a big celebration. The reenactment of Juan Carnaval’s weddings, the death of his wives, and the death of Juan Carnaval, the reading of his will and then the burning of Juan Carnaval ended the celebration.” Mrs. Tomasita sat back and reflected on the days when the tradition was very much alive in her once-small community. She explained that the community never lost focus on the meaning and significance of such traditions. “It was a time of celebration in which we got rid of the bad vibes by being festive just before going into the lent season. The lent season is a time to pray, fast and avoid drinking and partying – it was the time that marked a very import season in our Christian community. It was a time when our creator was being given up to be sacrificed and to us, keeping the festivity out of that lent season was important. For that reason we use to welcome the lent with the carnaval which eventually paved way for the Christian lent season,” she explained. “I just don’t want the tradition to be killed. The painting and comparsas should never stop, they both go together…I look forward every year to carnaval because it gives me energy and it reminds me of my childhood and teenage days. It brings back a lot of memory of our island life in each of us that still live today,” said Mrs. Tomasita as she cherishes and holds on to those fun memories of Carnaval in her younger days.