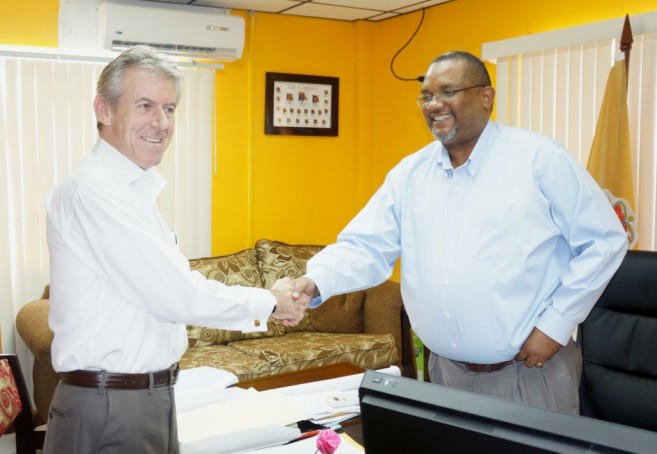 The new British High Commissioner to Belize, H.E. Peter Hughes today made a courtesy call on Minister of National Security Hon. John Saldivar in his office at the Ministry of National Security Headquarters in the Curl Thompson Building in Belmopan.
The British High Commissioner’s visit is part of his familiarization tour, having recently taken up his new position after presenting his credentials to Governor General Sir Colville Young.


H.E Peter Hughes started his diplomatic career as Desk Officer in the British Defense Department, and has since served oversees in Australia, the Caribbean, Asia and Afghanistan. Upon his appointment to Belize, Mr. Hughes was quoted as saying he hopes to build on the enduring friendship between the United Kingdom and Belize.
His Excellency Peter Hughes takes over from former British High Commissioner H.E Pat Ashworth who, upon leaving Belize, reiterated the British Government’s commitment to continue its support to the Belize Government, and the British Army Training Support Unit’s pledge to continue standing shoulder to shoulder with the Belize Defense Force.