« Older: Marco Gonzalez Maya Site, the only established National Park on a Belizean island, closed due to no GOB funding
Newer: » Unemployment rate on a rise: SIB reports 10.4% of Belize’s labour force without jobs


As of the third quarter of 2019, the Statistical Institute of Belize (SIB) is reporting a decline in economic activity for the county of Belize. A 0.4% decline rate was observed in the country’s total level of economic activity in the period of July to September 2019 when compared to the same time bracket in 2018. This decline in revenue has left economist wondering if Belize can possibly fall into recession. 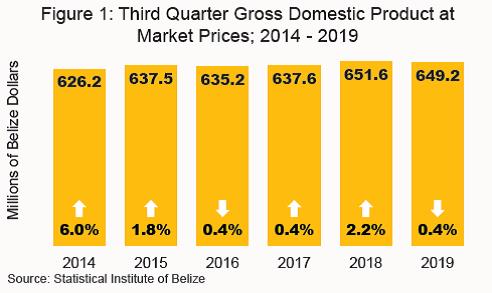 According to SIB, “the total value of goods and services produced within Belize during this period was estimated at $649.2 million dollars, a decrease of $2.4 million from the $651.6 million produced in the third quarter of 2018.” Both the primary and secondary industry sectors experienced a decrease in production. “The primary sector declined by 4.3%, mainly due to a drop in both banana production and marine exports. Activities within the secondary sector fell by 10.8 as electricity generation decreased during the quarter,” states SIB. On the positive, the tertiary sector which accounts for about a half of Belize’s total economy grew by 1.9% in comparison to the third quarter of 2018. The tourism industry falls under this tertiary sector, however, tourist arrivals did not account for the increase of the sectors productivity as tourist arrivals were down during this last quarter. “The total number of overnight visitors to the country fell from 102,599 persons in the third quarter of 2018 to 98,605 persons in the same period of 2019, while cruise ship arrivals were down by 20.7% from 240,484 to 190,610. These reductions in the number of visitors corresponded to a 6.2% fall in hotel revenues as well as 13 fewer cruise ship calls during this period,” explains SIB. 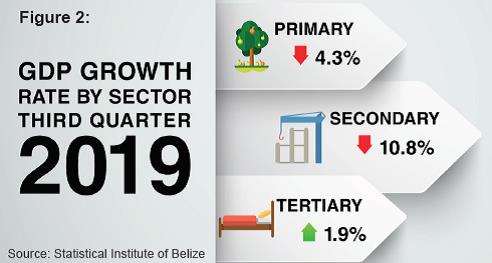 In an interview with News 5 Belize, Senator Mark Lizarraga representing the business community reiterated that the country’s main industries are failing, and they need attention. “Government services continue to play a big role in these indicators. Government’s borrowing and spending on what they call government services. And I think that the government has been driving our economy for too long. We know that many of our main industries have not been performing well. We know that our exports have been falling continually and we know that our imports have been rising. So our trade imbalance has been growing and that is not healthy in any economy,” says Lizzarraga. For the month of October 2019, Belize imported goods valuing $185.2 million, while the total domestic exports for October 2019 amounted to only $26.1 million representing a decline of 24.8% or $8.6 million when compared to exports for October 2018, which were valued at $34.7 million. 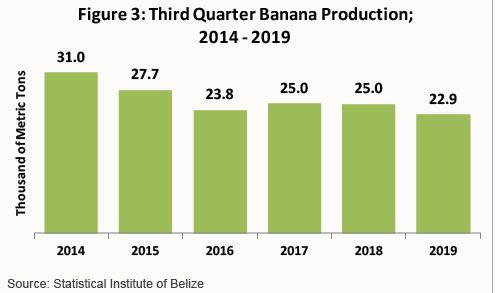 In 2018, Belize’s national debt of Belize amounted to approximately $1.82US billion. In his budget address for the fiscal year 2019-2020, Prime Minister of Belize, the Right Honorable Dean Barrow indicated that the Government ¬¬“at first stabilizing, then reducing the high level of public debt over the medium term.” Current Belize has ratio of public debt to GDP 93.8%. GOB hopes reduce that figure to 80.2% by 2022. 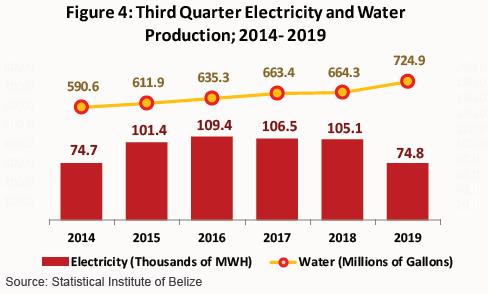 In Belize the fiscal year runs from April to March, with SIB releasing quarterly reports throughout the year of the key economic factors for the country’s economic activity. In 2019, the economy of Belize is projected to grow by 2.1%, a decline with respect to the 3.0% rate posted in 2018. After robust growth of 4% year-on-year in the first quarter of 2019 —driven mostly by the primary and tertiary sectors, with growth rates of 10% and 4.6%, respectively— output growth slowed to 0.2% in the second quarter. The lacklustre second-quarter growth was due largely to 5.7% and 15.3% declines in the primary and secondary sectors, respectively, notwithstanding the 3.6% growth of the tertiary sector, which accounted for over 70% of total GDP in both quarters. This sector is reaping the benefits of the country’s new marketing strategy in its thriving tourism industry, which has focused more on previously untapped opportunities in non-traditional source countries in South America, as well as an increased number of direct flights to Belize from major cities in Canada, Mexico and the United States. Overnight tourist arrivals were up by 6.3% and 5.4%, respectively, in the first two quarters of 2019 and the transport and communication category posted year-on-year expansions of 6.7% and 3.2%, respectively, in these two quarters. 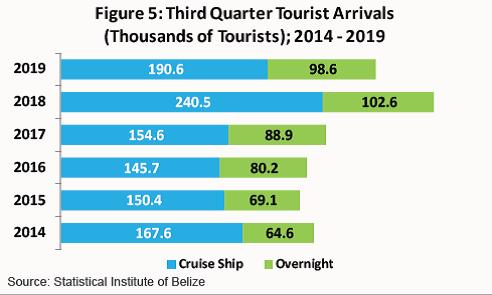