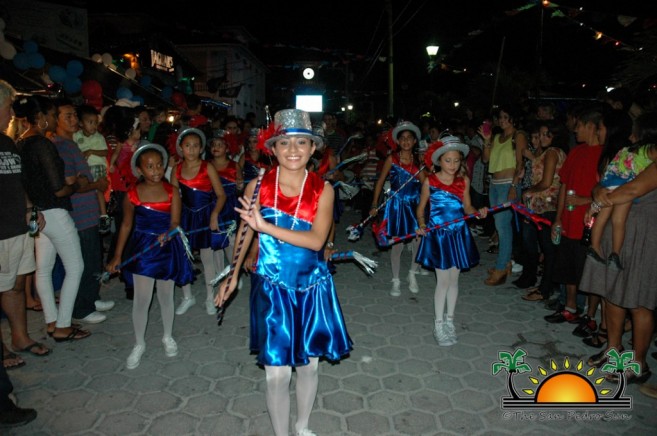 Activities to commemorate the 32nd anniversary of Belize’s Independence Day celebration spanned two days on Ambergris Caye. It started with the official Independence Eve Ceremony, followed by the Midnight Flag Raising Ceremony and concluded with an international concert at the old Saca Chispas Football Field. For the first time, the Independence Day speeches by the various leaders were delivered on the eve of the occasion.
The ceremony kicked off with much pomp and circumstance as the arrival of the various dignitaries was announced. Once all the invited guests were seated, the island’s Queen Miss Solani Graniel, escorted by Deputy Mayor Guillermo “Mito” Paz, and was led by the San Pedro High School Marching Band.

First to speak was the Mayor of San Pedro Town Daniel Guerrero who highlighted the many accomplishments under his administration. He stressed that the council has invested in improving the municipality’s infrastructure through the street rehabilitation project, the increase of scholarships for students amongst other programs. He ended by inviting all Belizeans to unit and join in the celebration to mark the country’s independence.

As is a tradition, next to speak was the representative of the main opposition People’s United Party Councilor Gualberto “Wally” Nuñez. He took the opportunity to highlight that it was his party that paved the way for the country’s political independence. Nuñez however, also spoke of the government’s neglect under the United Democratic Party. He said that the country is moving without a sense of direction by the current leadership and is like “a boat without a captain.” Nuñez ended by wishing all Belizeans a Happy Independence Day.
Replying to the opposition’s address was the government’s representative, Honorable Manuel Heredia Jr., Minister of Tourism and Culture and Area Representative for Belize Rural South. Heredia Jr. spoke of his government’s commitment to the people of Belize and the successes in investing in the country’s people. He said “our Prime Minister is a pro-poor leader,” and rebutted that the government is on the way to progress. 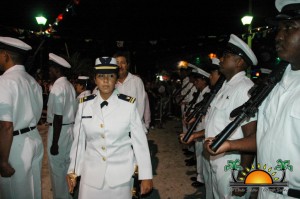 Following the speeches, the event continued with a few cultural dances paving the way for the Midnight Flag Raising Ceremony. The ceremony started with the march by elements of the Belize National Coast Guard led by Parade Commanding Officer Almita Staines Pinelo. Inspection of the Guard of Honor was done by the Hon Manuel Heredia. Two minutes before midnight, the Belize National Anthem resonated as the patriotic crowd all joined in the singing. At midnight, the Coast Guard gave a 21 gun salute as Mayor Guerrero and Hon Heredia conducted the traditional “Grito” (shout) of Independence. A spectacular firework displayed followed for about 35 minutes.
The jubilant crowd remained within the Central Park and Barrier Reef Drive area for the block party which went into the wee hours on the 21st of September. The entire atmosphere was festive as party goers danced with the various live bands and DJ systems blaring at various locations.
Activities ended with no major incident. The San Pedro Sun congratulates all Belizeans as well as the organizers for a successful celebration.