Home » Community and Society » Editorial: On this day in history – March 14

Editorial: On this day in history – March 14


1489 – Catherine Cornaro, Queen of Cyprus, sold her kingdom to Venice. She was the last of the Lusignan dynasty.
1647 – During the Thirty Years War, France, Sweden, Bavaria and Cologne signed a Treaty of Neutrality.
1757 – British Admiral John Byng was executed by a firing squad on board HMS Monarch for neglect of duty.
1794 – Eli Whitney received a patent for his cotton gin.
1879 – Nobel Prize winner in Physics, Albert Einstein is born.
1891 – The submarine Monarch laid telephone cable along the bottom of the English Channel to prepare for the first telephone links across the Channel.
1900 – U.S. currency went on the gold standard with the ratification of the Gold Standard Act.
1903 – The U.S. Senate ratified the Hay-Herran Treaty that guaranteed the U.S. the right to build a canal at Panama. The Columbian Senate rejected the treaty.
1914 – Henry Ford announced the new continuous motion method to assemble cars. The process decreased the time to make a car from 12½ hours to 93 minutes.
1915 – The British Navy sank the German battleship Dresden off the Chilean coast.
1936 – Adolf Hitler told a crowd of 300,000 that Germany’s only judge is God and itself.
1943 – U.S. President Franklin D. Roosevelt became the first U.S. President to fly in an airplane while in office.
1947 – Moscow announced that 890,532 German Prisoners of War were held in the U.S.S.R.
1950 – The first FBI’s Ten Most Wanted Fugitives List is announced.
1958 – The U.S. government suspended arms shipments to the Batista government of Cuba.
1976 – Egypt formally abrogated the 1971 Treaty Friendship and Cooperation with the Soviet Union.
1978 – An Israeli force of 22,000 invaded south Lebanon. The PLO bases were hit.
1983 – OPEC agreed to cut its oil prices by 15% for the first time in its 23-year history.
1991 – The San Pedro Sun newspaper is born. 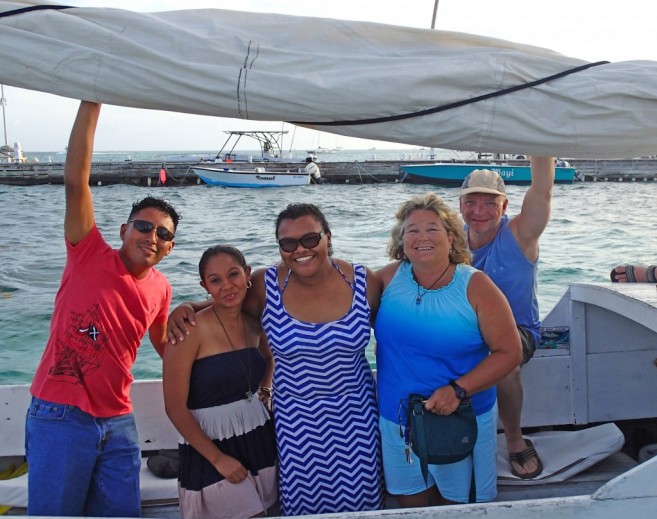 …and the rest is history!
Of course such a historical event cannot go uncelebrated, so in honor of the important occasion The San Pedro Sun staff and friends boarded their favorite Rum Punch II sailboat commandeered by the one and only George Eiley for a sunset cruise.
In fine fashion the staff reminisced about the progress the paper has made over the last 24 years, and especially over the last 10 years that the Sniffins have owned it. From pasting the pages using a light-table, to sending the proofs over to Belize City for printing via Tropic Air, to finally setting our printers up with e-mail and sending pages electronically, we have come a LONG way! We are super proud of our weekly paper and monthly My Beautiful Belize travel publication, and our www.sanpedrosun.com website is one of the most visited sites in the country!
Success only comes with the support and hard work of others, and we thank our advertisers for their years of partnership. In cooperation with our beloved community and the dedicated teamwork of our talented staff, The Sun will continue to shine for many, many years to come.

More on Community and Society
Liquor License Notice – PAST DUE