Since Monday, October 3rd most of the educational institutions around the country have been closed due to the industrial action strike led by the Belize National Teachers Union (BNTU). In San Pedro Town, the Roman Catholic Primary School and the San Pedro High School called off classes for the entire week, and on Thursday, October 6th teachers from the island travelled to Belize City to join BNTU’s nationwide demonstration which took place simultaneously in different parts of the country. Their demands for better governance and the implementation of the long awaited salary adjustment were on top of their agenda during the massive protest.
The BNTU declared the strike as successful, after receiving support from many social partners and concerned Belizeans countrywide. At the same time, the ‘Stand up for Belize’ campaign was strongly pushed to increase awareness and garner more support from the citizenry. At a meeting on Tuesday, October 4th at the BNTU headquarters in Belize City, the Union stated that they are in for the long haul, but they continue asking more organizations to join them in the fight against the Government of Belize (GOB) for good governance practices and transparency. 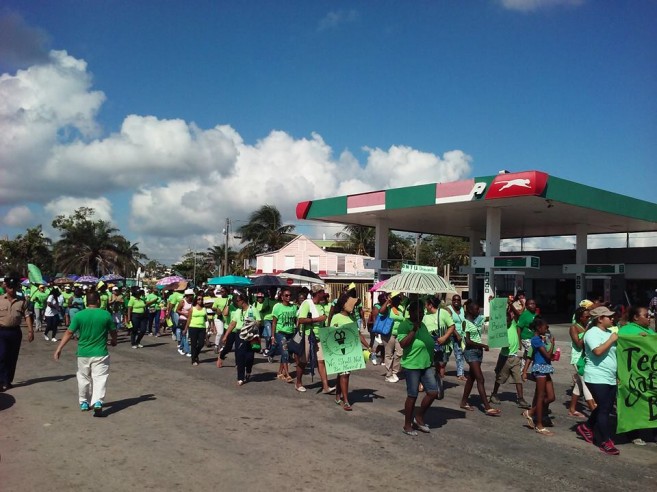 According to Luke Palacio, President of the BNTU, another important issue they are pressuring the Government is the matter of the salary adjustment, which is an increase of 3% in their salaries. According to them, GOB has homed in the topic and despite the money being available for the increase; Hurricane Earl relief has been cited as a greater priority. “The Government has refused vehemently to agree to our position at BNTU, that the request the Prime Minister made for us to defer our salary adjustment and we said to him you have to give us something for it,” said Palacio. “He is steadfast in his no and we are steadfast in our position. We have not given up and we will not give up on our 3% salary adjustment. They make people believe, this country has no money; contrary to that, they continue their reckless spending.”
On that same day, Cabinet met in Belmopan, and after that meeting, issued a press release was issued. The note asked the Union to suspend the strike and return to the negotiating table, stating that GOB was disappointed in BNTU for closing the schools and affecting the children of the nation. Speaking on behalf of the Government, Honourable Patrick Faber, Minister of Education stated that salary issue was never brought directly to his Ministry. “The issue of the 3% was never closed in terms of discussion with the Ministry of Education, thus, it was never closed by the Prime Minister,” said Faber. “The Union is indeed baffling, for them to say that there is this long drawn out period of negotiations. We said it at the last meeting that it is time to bring these negotiations to a close because it is taking too long. We want this to be dealt and finished as soon as possible.” 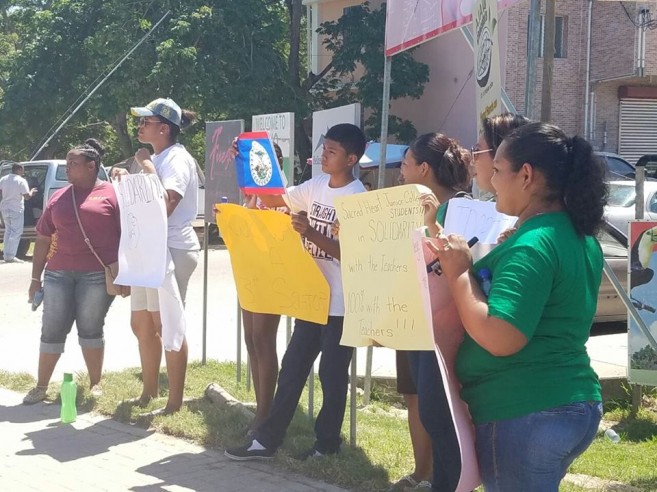 In response to the press release, the BNTU’s President of the Belize District Branch Kathleen Flowers mentioned that contrary to the statements made by the Minister, they have always been open to negotiations. Flowers stated that Prime Minister Right Honourable Dean Barrow has not met with them yet. “We need to hang on to this movement, if we don’t hang on to this, there is hardly any chance of us getting any element of that 3% negotiation and the other demands that we are trying to hold on,” said Flowers.
In the wake of the absence of thousands of teachers from schools, GOB has not shown any signs of complying with the pressure from the nationwide strike. Instead, they plan to fill in the classrooms with temporary teachers until the strike is called off. This has been a source of contention for the BNTU who believes that unqualified teachers might be brought in and affect the quality of education delivered to the students. However, Minister Faber went ahead and explained where those new teachers would come from in the event of an extended strike action. “We are encouraging managing authorities at the schools to hire fully licensed teachers who don’t have a job. Teachers who hold a provisional licence who didn’t have a job and teachers who hold a special permit that was granted,” said Faber. “That special permit may be as a second recourse after they were not given the special permit when they applied for it, and we are also looking at retired teachers and parents who are of good repute in the school community.”
The nationwide manifestation on Thursday saw the different district branches of the BNTU holding meetings and motorcades in their respective localities in the thousands. Everyone participating was encouraged to wear a green ribbon in solidarity towards their cause. According to Flowers, the message sent out to GOB is that the movement is a continued demonstration. They will not back down until their demands are fairly met.

No violent incidents were reported during the march and in an effort to keep tensions from escalating and to continue protecting private properties, the Belize Police Department were on high alert during the peaceful marches. They also remain stationed at schools countrywide.
As for whether the strike will continue throughout next week, with no sign of giving in from GOB, BNTU has since communicated that they will take it one day at a time.